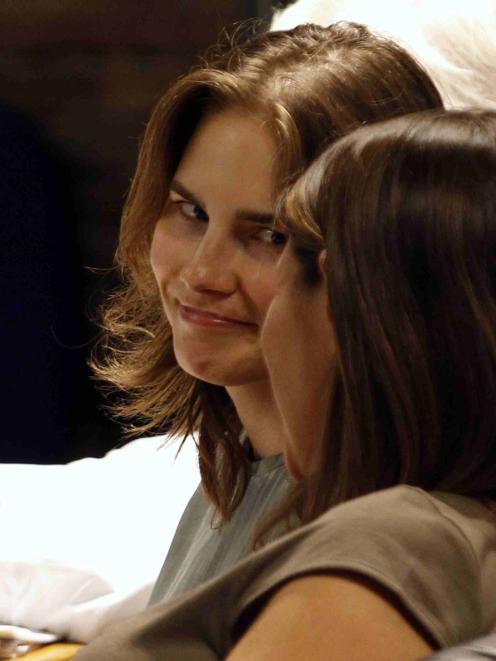 Amanda Knox, the US student convicted of murdering her British flatmate Meredith Kercher in Italy in November 2007, smiles in court during her appeal trial session in Perugia. REUTERS/Alessandro Bianchi
American student Amanda Knox was a naive young woman publicly "crucified" and "impaled" to justify wrongly imprisoning her for murder, her lawyer has told an Italian court.

Knox is appealing a 2009 verdict that found her guilty of murdering her British roommate Meredith Kercher during a drug-fuelled sex assault. Kercher's half-naked body was found in 2007 in a pool of blood in the apartment the two shared.

The Seattle student was sentenced to 26 years behind bars, and a decision in her appeals trial is expected on Monday. Her Italian boyfriend at the time, Raffaele Sollecito, and an Ivorian drifter were also jailed for their roles in the murder.

Much of the focus in the case has been on the fresh-faced Knox, who prosecutors allege led the sexual assault and held the knife that slit Kercher's throat.

Wrapping up the defence case, Knox's lawyer Carlo Dalla Vedova pointed to errors in the police investigation and urged a panel of lay and professional judges to look beyond the image of a sex-crazed wild girl created by the media and prosecutors.

"She was crucified, impaled in a public square," Dalla Vedova told the court, saying she had been unjustly held in prison for more than 1,000 days.

"Who, if not her, has been run over by a media tsunami?"

Being respectful of the pain caused by Kercher's death did not mean wrongly jailing two innocent youths, he argued.

"She was a girl who was quite different from how she has been depicted," he told the court. "How many times have we heard Amanda Knox saying 'Why don't they believe me?'"

The 24-year-old student has visibly lost weight since her last trial and has appeared frail in her latest appearances in court.

She listened with her hands clasped as her lawyers made an impassioned plea for her freedom, but at one point burst into giggles as her lawyer poked fun at the prosecution case.

Mixing outrage with mockery, lawyer Luciano Ghirga attacked a police probe as riddled with errors and cited inconsistencies in the version of events presented by prosecutors, who he said created the case around the suspects rather than evidence.

Knox hugged and thanked him after his arguments, he said.

Knox's defence has been helped by a forensics review that cast doubt on traces of DNA found on a kitchen knife and Kercher's bra clasp -- evidence used to convict her -- and attacked police for sloppy handling of crime scene material.

But prosecutors have since tried to wrest back momentum in the case by focusing on other evidence pointing to Knox and targeting her personality, painting her as a man-eater who resented her roommate and enjoyed flirting with danger.

They allege Knox and Sollecito staged a theft in the Perugia apartment to throw police off the track and have attacked Knox's credibility by pointing to a false accusation she made earlier in the case, blaming a Congolese barman for the murder.

Knox says she wrongly accused Patrick Lumumba because she broke down under stressful police questioning. In one sharp attack earlier in the trial, the lawyer for the barman called her Satanic, diabolic, a witch and a she-devil.

Defence lawyers have hit back, saying such extreme characterisations are part of a campaign by the prosecution and media to justify a lack of motive in the case by creating a false image of Knox.

Knox is expected to address the jury before they decide her fate on Monday and her family is optimistic their daughter will walk free from an Umbrian prison that has been her home for nearly four years.

Her case has drawn sympathy and outrage from many in the United States who see Knox as an innocent student trapped abroad in the hands of an unfair and convoluted justice system.

Her parents and sisters regularly appear on U.S. talk shows and she is backed by a dogged Internet campaign to free her.

But Knox's lawyers urged the jury not to be swayed by the speculation surrounding the Knox family's campaign.

"Don't put yourself in the shoes of the parents of Amanda Knox, but I ask you not to consider them part of a transatlantic plot or political lobbying," said Ghirga, ending with a fatherly tap on Knox's shoulder and calling her courageous. "They are parents who deserve absolute respect."