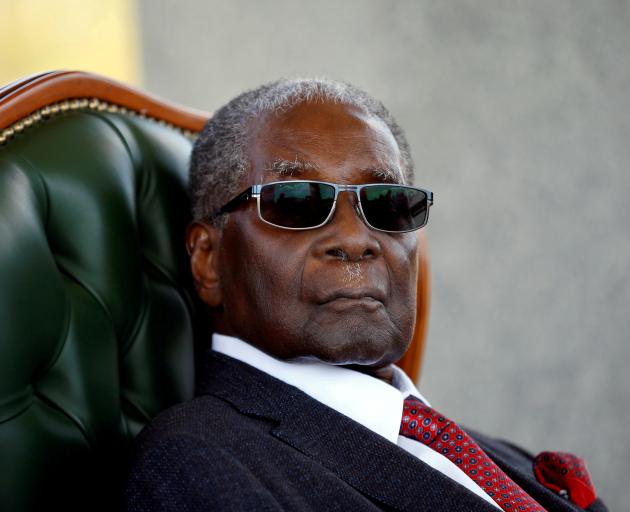 Robert Mugabe ruled Zimbabwe for 37 years before being ousted by his own army in 2017. Photo: Reuters
The body of former Zimbabwean president Robert Mugabe was expected in the country later on Wednesday, a family spokesman says, but his final resting place remains a source of mystery amid a dispute between some family members and the government.

Mugabe, one of the last "Big Men" of African politics who ruled the southern African nation for 37 years until he was ousted by his own army in November 2017, died in a Singapore hospital five days ago.

"They have left Singapore and we are expecting his body at 3pm (local time) at the airport and he will be received by family and government," Leo Mugabe, a nephew and family spokesman, told Reuters.

Mugabe's wife Grace and Zimbabwean Vice President Kembo Mohadi are among those accompanying the body, he added.

A private jet departed from Singapore's international airport in the direction of southern Africa on Wednesday morning, according to flightradar24.com, a plane tracking website.

Earlier, a police motorcade escorted vehicles to the airport from the Singapore Casket, a funeral parlour where Mugabe's body was being held.

In Zimbabwe, Leo Mugabe, however, declined to say where Mugabe would be buried, saying only that on arrival his body would be taken to his palatial home in the capital, known as Blue Roof.

On Thursday, ordinary Zimbabweans and supporters are expected to pay their last respects to Mugabe at a Harare soccer stadium, where the body will lie in state before being taken to his rural home in Kutama, 85km from the capital, the family spokesman said.

Mugabe, Zimbabwe's founding leader, is proving as polarising in death as he was in life, as the fight over where he will be buried threatens to embarrass his successor, President Emmerson Mnangagwa, and deepen divisions in the ruling ZANU-PF party.

Mnangagwa and his party want Mugabe buried at a national monument to heroes of the liberation war against the white minority Rhodesian regime.

But some of Mugabe's relatives have pushed back against that plan. They share Mugabe's bitterness at the way former allies including Mnangagwa conspired to topple him and want him buried in his home village.

A government minister said on Tuesday the burial was still planned for Sunday, but the site would only be known once the body arrived and government officials consult with the family.