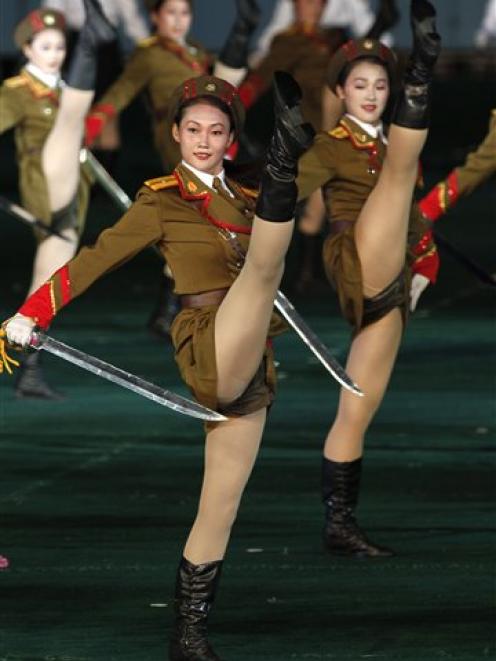 Kim Jong Il waved to the crowd, drawing a frenzy of applause from onlookers at Pyongyang's May Day Stadium, in what is believed to be his first appearance at the song-and-dance performance in years. The son slated to succeed him as leader of North Korea was by his side, broadcaster APTN said.

Pyongyang was in a festive mood as North Korea marked the anniversary of the founding of the ruling party with a weekend of celebrations that will culminate in a massive military parade tomorrow.

Even in a country known for its elaborately staged displays of military might, the scale and pomp of the festivities - less than two weeks after Kim Jong Il's re-election to the party's top post and the news that his 20-something son would succeed his father and grandfather as leader - suggested something special.

"This is a very important event because it's being held after Kim Jong Un's debut as heir-apparent," said Yoo Ho-yeol, a professor of North Korean studies at Korea University in Seoul.

The festivities began on Friday night with fireworks that lit up the sky over central Pyongyang, footage from TV news agency APTN showed. Students danced across the city's plazas and brass bands played "Please Receive the Best Wishes of the People," the state-run Korean Central News Agency reported.

On Saturday, North Korea's top leadership gathered at May Day Stadium for speeches celebrating the Workers' Party anniversary, and Kim Jong Il and Kim Jong Un stayed on to see the Arirang performance that evening along with visiting top Chinese Communist Party official Zhou Yongkang, a member of China's Politburo.

The two Kims' appearance turned the Arirang extravaganza - part theater, part circus, and involving some 100,000 performers singing, dancing and flying through the air - into a VIP event attended by wartime heroes, foreign dignitaries and the international press, who were given front-row seats to record the spectacle.

The party culminates with the staging of a massive parade through the streets, the largest in the country's history, North Korean officials told APTN. The extravaganza will feature a phalanx of tanks, more than 16,000 troops and a display of the regime's prized missiles and military weaponry, according to South Korean officials.

There was no confirmation that Kim Jong Un would join his father in presiding over the parade from a viewing platform at Kim Il Sung Plaza, named after his grandfather. But the campaign to introduce him to the North Korean people - and the world - has been gaining momentum since his name first appeared in state media on Sept. 27 in a dispatch announcing his promotion to four-star general.

If he does appear, it would be by far his most public appearance yet.

The parade was expected to be aired live on state TV in an unusual departure from broadcasting norms in North Korea, where any broadcasts are heavily censored. And in a radical policy shift by a government typically wary of the international press, a reporter and photographer from The Associated Press were invited to Pyongyang to cover the event, along with select foreign TV crews.

Yoo predicted that Kim Jong Un would not only appear at the parade, but that he would be in full military dress and bedecked with medals and insignia as befits a top official in a country run under a "military first" policy. In the few photos published since his debut, the baby-faced son has been clad in civilian clothing.

It would be a heady debut for the mysterious young man who until two weeks ago was a virtual unknown outside North Korea's inner circle of military and political elite.

Kim Jong Un is the third son of Kim Jong Il but his name never appeared in state media until late last month, and even the exact spelling of his name was unclear.

Nor were they any photos of him as an adult until the state's main Rodong Sinmun newspaper last week published a group shot of the young man seated with his father and other top party leaders. This week, state television showed still images of father and son watching a military unit carry out live-fire drills.

The Swiss-educated son said to be his 68-year-old father's favorite emerged in recent months as the rumored front-runner to inherit the mantle of leadership, despite his youth and inexperience. There were reports that children were singing odes to "the Young Commander," and that his January birthday had been made a national holiday like those of his father and grandfather.

He won his first military post with the promotion to general late last month, and was appointed during the nation's biggest political convention in 30 years to the Workers' Party's central military commission, as well as the party's Central Committee - strong signs he was being groomed to eventually succeed his father.

"Our people take pride in the fact that they are blessed with great leaders from generation to generation," said Yang Hyong Sop, a member of the powerful political bureau of the Central Committee of the Workers' Party.

"Our people are honored to serve the great President Kim Il Sung and the great leader Kim Jong Il," he added. "Now we also have the honor of serving young Gen. Kim Jong Un."

The question of who will take over leadership of the nuclear-armed nation of 24 million has been a pressing one since the last big military parade in 2008.

At the parade celebrating the 60th anniversary of the founding of the Democratic People's Republic of Korea in September 2008, Kim Jong Il was noticeably absent. U.S. and South Korean officials said Kim had suffered a stroke, sparking concerns about a power struggle and social upheaval if he were to die without a clear successor.

Though thinner and grayer, Kim has resumed busy rounds of tours to factories and military units. And a surprise trip to China in late August may have been to introduce his son to top officials in the neighboring nation that is North Korea's most important ally and source of aid.

Kim Il Sung was a former guerrilla who fought against Japan's colonization of Korea and built a cult of personality around him and his son. Kim Jong Il took over as leader when his father died in 1994 in what was the communist world's first hereditary transfer of power.

Kim Jong Il rules under a "songun," or "military first," policy with a 1.2 million-member military that is one of the world's largest. Along with military manpower and weaponry, North Korea under his leadership has been building up its nuclear arsenal, much to the consternation of other nations.

Military parades have long been a way for the regime to bolster pride as well as show off its military hardware to the outside world, analyst Yoo said.

"They are going to try to prove that their military might is nothing to be underestimated," he said in Seoul.