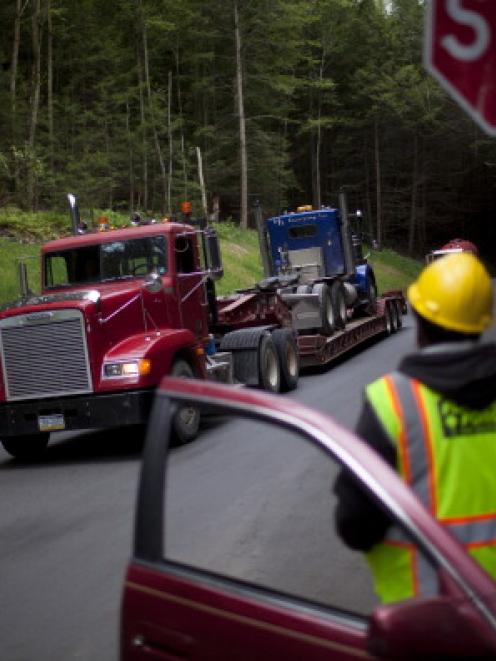 A security guard directs trucks servicing the oil and gas drilling operations in Waterville, Pennsylvania. The local area sits above the Marcellus Shale, which stretches across West Virginia, Ohio, Pennsylvania and New York State. Photo Getty Images
Ohio geologists have found a probable connection between fracking and a sudden burst of mild earthquakes last month in a region that had never experienced a temblor until recently, according to a state report.

The quake report, which coincided with the state's announcement of some of the nation's strictest limits on fracking near faults, marked the strongest link to date between nerve-rattling shakes and hydraulic fracturing - the process of firing water, sand and chemicals deep into the earth to eject oil and natural gas out of ancient rock.

Last month, Ohio indefinitely shut down Hilcorp Energy's fracking operation near the Pennsylvania border after five earthquakes, including one magnitude-3 temblor that awoke many Ohioans from their sleep.

Federal scientists have previously linked earthquakes in part to the use of injection wells, where post-fracking waste water is forced back deep into the earth for storage. None of the seven wells near the Ohio temblors were used for waste disposal, leaving Ohio scientists to go a step further to find a significant relationship between the initial blast of fluid and the earthquakes shortly after.

They "believe the sand and water injected into the well during the hydraulic fracturing process may have increased pressure on an unknown microfault in the area," the Ohio Department of Natural Resources said in a statement about the Poland, Ohio, operation.

The new rules require companies to install "sensitive seismic monitors" before beginning to drill sideways into underground rock "within 3 miles of a known fault or area of seismic activity greater than a 2.0 magnitude." Humans can generally feel earthquakes in excess of magnitude 3.

Drilling would be suspended pending investigation whenever the monitors detect anything above magnitude 1.

"While we can never be 100 percent sure that drilling activities are connected to a seismic event, caution dictates that we take these new steps to protect human health, safety and the environment," said department Director James Zehringer. Data gathered by the monitors would be used to improve fault maps, he said.

Hilcorp Energy said it was reviewing the new permitting rules and that it remained "fully committed to public safety and acting in a manner consistent with being a good corporate citizen."

Officials from Ohio and several other states that have seen a dramatic rise in seismic activity met recently to discuss how to handle the ongoing expansion of fracking to new beds of rock, where faults might not be well mapped.

Gerry Baker, an official with the Interstate Oil and Gas Compact Commission, called Ohio's new rules a "sensible response to a serious issue that regulators across the country are closely examining." Oklahoma, Texas, Arkansas and Kansas have been among those seeing the largest surges in seismic activity.

Critics of fracking have long warned of a suspected connection between earthquakes and the expanded drilling for oil and gas in shale deposits. They've also raised concerns about the chemicals used contaminating groundwater.

Ray Beiersdorfer, a Youngstown State University geology professor whose wife co-founded Frackfree America, said the new regulations mirror what he has been seeking. He's now asked Ohio officials to make public the data they used to find the connection as well as set the new restrictions.

"The whole problem is no one knows about these faults until the earthquakes happen because the faults haven't been researched," he said.

"Although there is much uncertainty regarding what causes earthquakes and how dangerous small and medium quakes may be - and therefore this is a policy that may well evolve in the future - the state's decisive action is based on the best information available," the organization's senior policy advisor, Scott Anderson, said in a statement.

Oil and gas companies have tended to stay away from the well-known fault lines in Ohio, according to the industry publication Natural Gas Intelligence. But industry leaders have maintained that there's scant evidence that fracking causes earthquakes, labeling the temblors isolated incidents.

At Hilcorp's site directly above last month's earthquakes, the state has banned further fracking but has allowed wells already fracked to resume operating.

"This is also expected to have the beneficial effect of reducing underground pressure and decreasing the likelihood of another seismic event," the state said.