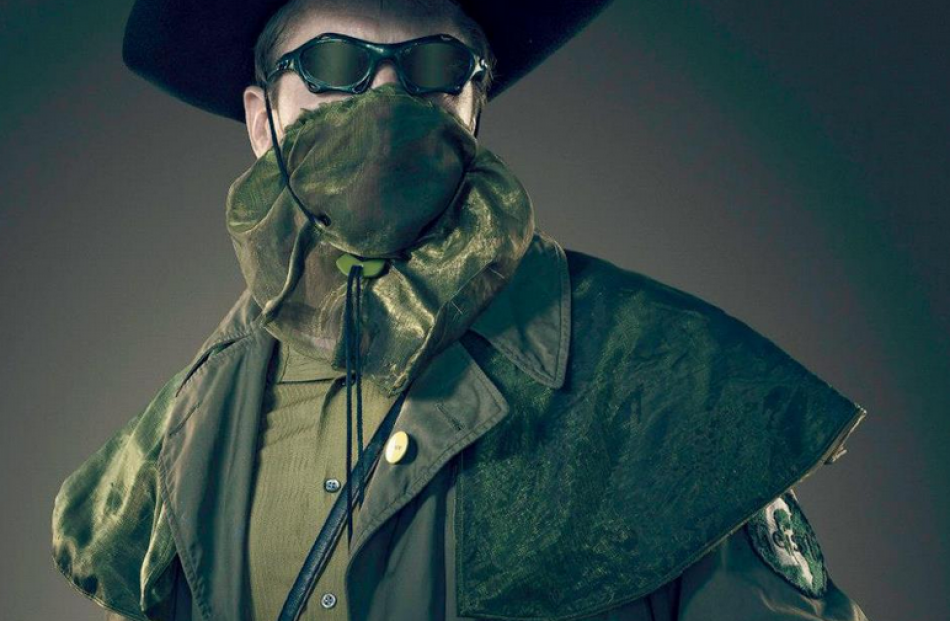 Geist is part of a community of flamboyant do-gooders who call themselves real life superheroes.

The man who calls himself Geist - as in German for ghost - is often asked why he's lurking around at night dressed like a cross between a ninja warrior and an Old West gunslinger.

He understands the onlookers' curiosity, but he thinks the query is off the mark.

The critical question is not why he's doing it, he said. It's why other people aren't.

"Why not do good just for the sake of doing good?" he said.

Geist is part of a community of flamboyant do-gooders who call themselves real life superheroes (RLSH), a phenomenon that springs from the intersection of real life and comic books.

Clad in outlandish costumes, they dedicate themselves to helping those in need through a wide range of missions that range from providing food for the homeless to patrolling city streets in the dead of night.

They're the subject of the book Heroes in the Night, by Tea Krulos, who estimates that there are 200 to 500 of them across the United States. (It's hard to get an exact count because of their demand for anonymity, Krulos said.)

One of the more active chapters, called the Great Lakes Alliance, is based in Minnesota.

"It sounds crazy," Krulos admitted of the real-life superheroes' behaviour. "But they're actually shockingly normal.

"The image people have of them is that they're young, dorky guys who live in somebody's basement. But there's a lot of diversity in terms of age, professions, politics and religion. Yes, what they do is a little eccentric, but they are basically kindhearted people."

Krulos maintains that the superheroes are motivated to help others, but clearly aren't in it for the recognition.

Most of them are adamant that their real names not be revealed. Some do it to protect themselves and their families from retribution by ne'er-do-wells whose activities they have disrupted. Others do it to maintain the purity of their motivation.

"If you're doing it for credit, you're not doing it for the right reason," Geist said. "I call myself Geist because I want to be like a ghost. I want to go in, do what needs to be done and then get out. I don't want to hang around for a pat on the back."

Like most of his compatriots, Geist grew up as a comic-book fanatic. But their costumes are more than just indulgences of youthful fantasies, he said.
The outfits catch people off guard, and that gives the real-life superheroes a strategic advantage.

"We know that our gear - which is what we call our costume - is kind of crazy, but that sort of approach works," he said.

"I don't want to have a physical confrontation with anyone. I prefer to be a diplomat. I want to talk people down (from a confrontation), and with my gear, I have an advantage."

Police are fine with the real life superheroes' patrols as long as they limit their activity to calling for help if they see something that needs police attention.

"We're against any kind of intervention, but we encourage people to call us," said Minneapolis police spokesman Sergeant William Palmer.

In that regard, he said, the real-life superheroes are similar to neighbourhood watch groups - except for their unusual clothing.

"But I've seen stranger," he said.

Geist also sounded a cautionary note about others following his lead: "I don't approve of just anyone doing this until I get a sense that they're capable in most areas (and) have a skill set and can handle themselves if trouble breaks out."

Geist has had only one minor run-in with the police, and he tells that story as a joke on himself. He climbed down a railroad trestle that ran over a river to paint over graffiti, only to discover that he couldn't get back up.

He had to call the police for help, and they ended up summoning a fireboat team.

"A policeman told me that I shouldn't have gone up there, but I said, ‘It was a swastika, I couldn't just leave it there,' " Geist said.

"Fortunately, I had taken a picture of it with my cellphone before I painted it over. He didn't give me a ticket, and I think in the end, he sort of saw it my way. He just said, ‘You're OK to go, but if you ever decide to do this again, call us ahead of time.' "

Geist has helped direct traffic at the scene of a fire (with the blessing of police), joined missing-person searches and provided food to the homeless (which he pays for himself).

Asked if the latter makes him feel good, he said: "There's never enough (food to feed everyone). There's never going to be enough, and that makes me feel sad."

He was motivated to become a superhero by the 9/11 attacks.

"And because the ideals to which we aspire do so much to determine the ways in which we behave, we all have a vested interest in each person having heroes, and in the choice of heroes each of us makes."

But when he goes to help people who are down on their luck, the only thing that matters is what they believe.

"People can believe whether it's true or not that there are heroes in the world," he said.

"Maybe it's a myth, but it's the belief that's important. I really doubt I'm one of them, but on that day when I meet them, I am a hero to them. That's the hope we give to others."