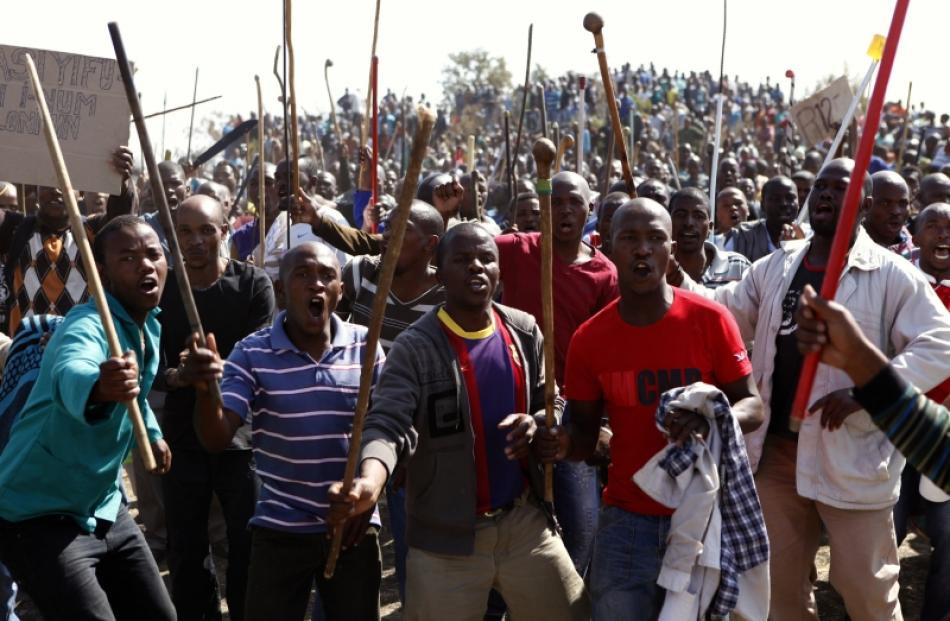 Protesters sing as they hold weapons outside a South African mine in Rustenburg, 100km northwest of Johannesburg. Photo by Reuters.

Its leaders call themselves devout Christians and say life is sacred. But its supporters march with spears, machetes and clubs and anoint themselves with magic potions to ward off police bullets.

By taking on South Africa's powerful mining houses and the politically-connected NUM mineworkers' union, breakaway union AMCU has put itself at the heart of national soul-searching after last week's police shooting of 34 striking platinum miners at a mine northwest of Johannesburg.

Since the start of this year, the AMCU (Association of Mineworkers and Construction Union) has been muscling in to grab members from the National Union of Mineworkers (NUM) in a bitter turf war that has triggered violence at several mines and shaken the industry.

While critics, which include mine executives and the NUM, accuse it of using strong-arm tactics to recruit members and press labour claims with illegal strikes, AMCU's leaders wage their campaign in the name of Jesus Christ and racial justice in one of the most unequal societies in the world.

"Our Constitution favours whites ... We are strangers in our land," reads a sign at the AMCU office at an Impala Platinum mine near Rustenburg, west of Johannesburg.

An AMCU recruitment offensive led to violence this year at the world's largest platinum mine, which is run by Implats.

AMCU bosses project their battle with NUM, which has spread across the platinum sector in the country that sits on 80 percent of known reserves, in terms of Christian compassion for the poor and a sense that Africans have been excluded from the prosperity that mineral wealth should provide.

"We believe life is sacred and should not be wasted," AMCU General Secretary Jeffery Mphalhele told Reuters.

Both Mphalhele and AMCU President Joseph Mathunjwa, the son of a Salvation Army preacher, broke down and cried at a news conference a day after killings last Thursday (local time) that crowned a week of violence at the Marikana mine operated by the world No. 3 platinum producer Lonmin .

Mathunjwa said he went down on his knees before the massed strikers at Marikana, begging them to disperse peacefully or risk being killed by police.

Shortly afterwards, 34 of them were dead, killed in a hail of police gunfire that reminded South Africans of the white-led security forces' repression of black protesters under apartheid rule that ended 18 years ago.

Police, union officials and social researchers say AMCU members use "muti", or witchcraft, in which miners use potions they believe will protect them against enemies and bullets.

Police said they had taken pictures of one such anointing ceremony by a "sangoma", or witch doctor, at Marikana.

"At all of the AMCU meetings I have attended, they have a prayer to start but then someone sprays around some muti," said Crispen Chinguno, a researcher at the sociology department at Johannesburg's University of the Witwatersrand, who has spent time with the platinum mining communities.

President Jacob Zuma has ordered an inquiry into the bloodletting at Lonmin, which also saw 10 people hacked to death in the week leading up to Thursday.

The AMCU was founded by former NUM member Mathunjwa after he fell out in 1998 with Gwede Mantashe, the NUM's former General Secretary who now holds that position in the ruling African National Congress and is Zuma's right-hand man.

The NUM is a key support base for the ANC and so the AMCU's challenge also has political implications as it taps into growing discontent with the country's trade union and governing elites.

The AMCU says it has made inroads into the NUM's membership base and now claims about 30,000 national members compared to 300,000 who belong to the dominant union.

AMCU leaders charge the NUM and the ANC with being elitist, interested only in politics and self-enrichment, and being out of touch with poor black Africans.

Mathunjwa rejects NUM allegations that his union is using mineworkers desperate to improve their livelihoods as "cannon fodder" in its power struggle to increase its membership.

"Why are we labelled as the union of violence? What have we done?"," he says.

"At end of the day, management failed us," he added, saying Lonmin ignored the demand by striking rock drill operators - one of the toughest jobs in the industry - for their monthly salaries to be increased to 12,500 rand ($NZ1850) from what the company says is around 10,000 rand a month.

There are workers in the platinum sector toiling for much less.

The events at Marikana gave South Africans a frightening glimpse of the threats and violence that accompany the union turf war in which the AMCU admits it is fervently engaged.

Extensive television footage of the week-long standoff showed several thousand strikers carrying traditional weapons - spears, machetes and clubs known as "knobkerries" - massing like a Zulu "impi", or army, on a rocky hill near the mine.

Police, who said they fired in self-defence on Thursday, said the strikers also carried firearms.

The Marikana miners said they carried the weapons to defend themselves, but witnesses say there is a clear edge of aggression to the AMCU drive for membership and prominence.

At an AMCU rally attended last month by a Reuters correspondent, marchers sang: "Who is this NUM, how can we kill it?"

The pungent smell of marijuana filled the winter air and the young men waved banners and sticks.

A pattern of violence and illegal stoppages has also characterised the AMCU's recruiting efforts from Implats to Lonmin to Aquarius Platinum.

At Marikana on Tuesday, some miners said they feared being attacked by AMCU members if they returned to work.

"These guys are very violent. We are afraid they will kill us if we go to work while they are striking," said a miner who did not want to be named. "I need my job but what will my family do if I am killed?"

The AMCU also has loose links to organisations rooted in the black consciousness movement of the 1970s, putting it firmly at odds with the multi-racialism preached by the ANC.

"They feel that as black people they are getting a raw deal because of the history of this country ... and they seem to use violence as a way to forge worker solidarity," said researcher Chinguno.

The AMCU's differences with the NUM even come down to language.

"The NUM, they come here and speak English because the uneducated workers do not understand it," Venter Mulutsi, an AMCU organiser at Implats, told Reuters.

AMCU rallies are addressed in Fanagalo, the lingua franca of South Africa's mines, which is a pidgin mix of Zulu, other African languages, English and Afrikaans.

"This is our language, it is the language of the mines," said Mulutsi.