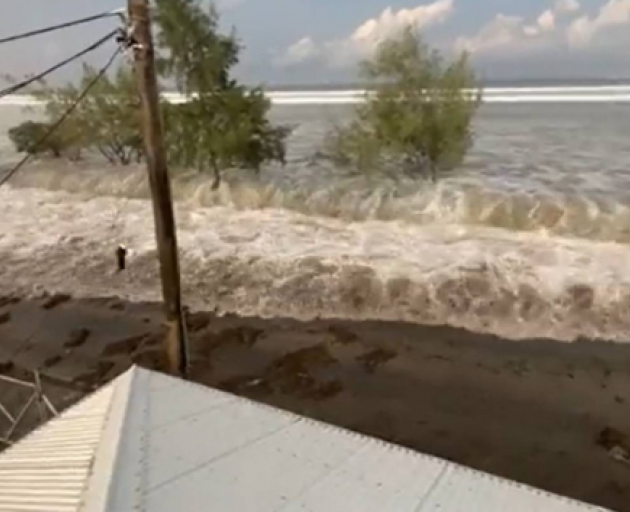 The tsunami alert follows yesterday's eruption of Hunga Tonga-Hunga Haʻapai, an underwater volcano, sending ash, steam and gas up to 17km into the air.

Volcanic ash is currently raining down on Nuku'alofa, Tonga's capital.

The police and local authorities have advised for all residents to move to higher ground.

A tsunami alert has been issued for Fiji and American Samoa. Residents of low-lying areas were urged to move to higher ground.

"We expect New Zealand coastal areas on the north and east coast of the North Island and the Chatham Islands to experience strong and unusual currents and unpredictable surges at the shore," it tweeted.

RNZ says there are reports of sirens ringing across Nukualofa and police are asking people to move to higher ground.

There are also reports on social media of the explosion being heard in Fiji - and as far away as Samoa.

The Tonga Meteorological Services posted to Facebook noting a warning is in place for the entire island.

Locals have been posting online, including one who wrote: "A volcanic explosion just erupted and people have evacuated to higher ground now from possible tsunami waves also ash shards are falling and now the ash clouds are covering the island of Tongatapu.

The shock wave generated by the recent eruption of Hunga Tonga #volcano is even visible on satellite imagery. Unbelievable. pic.twitter.com/5Hih2mPePs

"We live in Kolomotu'a near the ocean so we have left already and we are in our cars heading out but traffic on every road. Please pray for us as a family and safety."

Anthony Browne is in Fiji and told the Herald the eruption is still being heard and felt as far away as Nadi, Fiji.

"For the last hour there have been continuous explosive sounds with continuous rumbling, windows rattling and doors rattling."

It is literally dark in parts of Tonga and people are rushing to safety following the eruption. 🇹🇴 pic.twitter.com/7NoP0y9GCo

Spectacular footage posted on Twitter shows waves flowing into the streets from a beach in Tonga.

This family were in church. They’d just finish having choir practice and the tsunami hit 😩❤️🇹🇴 pic.twitter.com/DLLFRJ9BAc

Taaniela Kula, Deputy Secretary, Ministry of Lands & Natural Resources – who was in charge of the group – told local media outlet Matangi Tonga: "Yesterday there were massive explosives, thundering lightning within two miles away, we observed and recorded.

"Big day yesterday indeed!. It was great getting out there during the volcano's peak hours. It's a geologist's dream to see actual geological events in process."

The ongoing plumes of debris from the volcano earlier saw a halt of flights in Tonga.

Mannnn my heart hurts for my people rn 😭🇹🇴🙏🏽 pic.twitter.com/QjzW5f1uAy

As of yesterday, the maximum tsunami wave had been recorded in Nuku'alofa tide gauge at 12:30pm and was about 30cm above sea level.