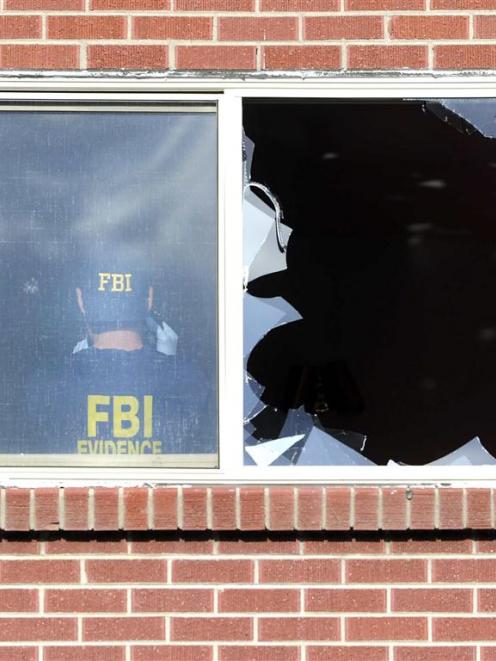 An FBI agent takes photographs inside the apartment of James Holmes, the suspect who opened fire in a movie theater in Aurora, Colorado. REUTERS/Jeremy Papasso
Some residents are moving out of the building where Colorado shooting suspect James Holmes is accused of booby trapping his apartment with explosives that a law enforcement source said could have destroyed the complex if detonated.

"I'm still kind of in shock," said resident Tori Everhart, 27, ducking under yellow police tape surrounding the building, her arms full of luggage. "I just want to get out of here."

Throughout the day, cars slow as they pass the building that has 12 apartment units on three floors. Some of those passing lean out car windows to snap pictures, while others park their cars and get out to stare up at Holmes' third-floor corner apartment, whose windows were nailed shut this week with boards.

The apartment building is a block from the University of Colorado Anschutz Medical Campus, where Holmes took classes. According to court documents released on Friday, Holmes sought psychiatric treatment from Dr. Lynne Fenton, director of the school's student mental health services.

Police hurriedly evacuated the apartment complex after learning that Holmes' apartment had been rigged to explode if someone tried to enter it.

A federal law enforcement source told Reuters last week that triggering the bombs could have destroyed the building.

Everhart said she had been planning to move out next Wednesday, when her one-year lease expires.

But after learning of the bomb plot, Everhart said she never wanted to spend another night there.

"I've been thanking my lucky stars that we all didn't come to a different end," Everhart said of herself and fellow residents, some of whom have told her they are moving out.

On Saturday, a couple who live on the second floor said they, too, would probably move out, but had not made a final decision. They declined to give their names.

Everhart and other residents said Holmes was an unremarkable neighbor who did little to call attention to himself.

"I don't think anyone will ever know what was really going through his mind," she said.

Dmitry Shchekochikhin, a University of Colorado medical student who lives on the first floor of the building, remembered Holmes as being less than neighborly.

"Whenever I would say hello or would greet him, he would never say anything back," Shchekochikhin said.

He said he was still deciding whether to move out, but that neighbors told him they planned to leave as soon as possible.