Trump bans travel between US and Europe 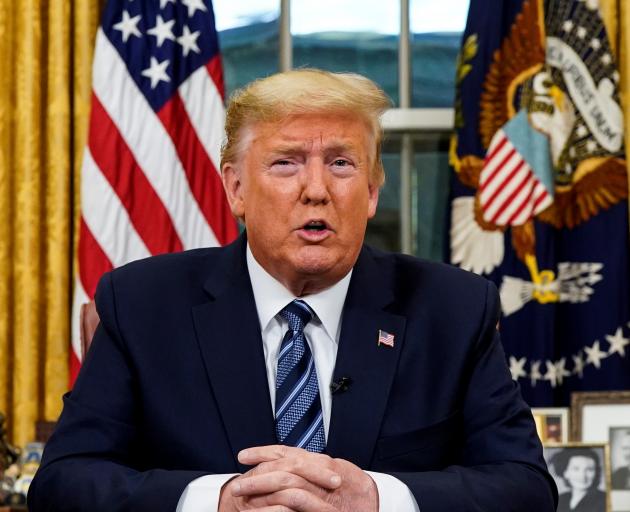 Trump said the travel restrictions did not apply to the United Kingdom. He did not provide a list of countries but said simply the restrictions applied to all of Europe.

The president, who faces re-election in November, took the dramatic step in a sombre Oval Office speech as he battles to address the health and economic shocks to Americans and responds to mounting criticism that he has underplayed the threat from the mushrooming coronavirus crisis.

“We are marshalling the full power of the federal government and the private sector to protect the American people," he said.

"This is the most aggressive and comprehensive effort to confront a foreign virus in modern history," he said.

Trump, whose re-election bid on November 3 could hinge on how well he responds to the crisis, stopped short of declaring a national emergency.

But he pulled no punches in saying Europe was partly to blame for the virus' spread in the United States, where it has killed at least 37 people and infected 1,281. His travel restrictions on Europe were similar to what he declared on travel from China when the illness was spreading wildly there.

“The European Union failed to take the same precautions and restrict travel from China and other hot spots. As a result, a large number of new clusters in the United States were seeded by travellers from Europe," he said.

As the US stock market took another hit from the virus on Wednesday, Trump said he would take emergency action to provide financial relief for workers who are ill, quarantined or caring for others due to the illness.

He said he was instructing the Treasury Department to defer tax payments without interest or penalties for certain businesses and individuals affected.

Trump added he was also instructing the Small Business Administration to provide capital and liquidity to firms affected by the virus.

Good to see a leader with the testicular fortitude to do something to protect his public at large
Won't happen here until after the PM's photo 90 in Chch.... Can't stop international media from coming for Sunday now can we jacinda, though I feel you'll be rather miffed that the virus will take the spotlight off yourself and your "brand"