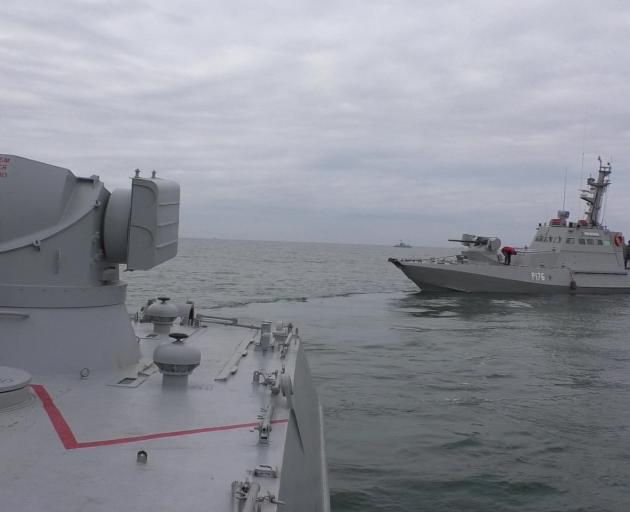 Ukraine accused Russia of illegally seizing three of its ships in the Black Sea after opening fire on them on Sunday (local time), a charge that if confirmed could ignite a dangerous new crisis between the two countries.

Russia did not immediately or directly respond to the allegation, but Russian news agencies cited the FSB security service as saying it had incontrovertible proof that Ukraine had orchestrated what it called "a provocation" and would publicise its evidence soon.

Ukrainian President Petro Poroshenko immediately called a meeting with his top military and security chiefs on Sunday night to discuss the situation.

The crisis began earlier on Sunday after Russia stopped the three Ukrainian ships from entering the Sea of Azov via the Kerch Strait by placing a cargo ship beneath a Russian-controlled bridge.

The Ukrainian navy said on social media that two Ukrainian sailors had been wounded in the subsequent seizure of its ships and that the alleged Russian attack on them had occurred after they had retreated and headed back towards Odessa, the Black Sea port from where they had begun their journey.

"After leaving the 12-mile zone, the Russian Federation's FSB (security service) opened fire at the flotilla belonging to ... the armed forces of Ukraine," it said.

With officials from both countries accusing the other of provocative behaviour and relations still raw after Russia's 2014 annexation of Ukraine's Crimea and its backing for a pro-Moscow insurgency in eastern Ukraine, the incident risks pushing the two countries towards a wider conflict.

Earlier on Sunday, Russia's border guard service had accused Ukraine of not informing it in advance of the ships' journey, something Kiev denied, and said the Ukrainian ships had been manoeuvring dangerously and ignoring its instructions with the aim of stirring up tensions.

Russian politicians denounced Kiev, saying the incident looked like a calculated attempt by Poroshenko to increase his popularity ahead of an election next year.