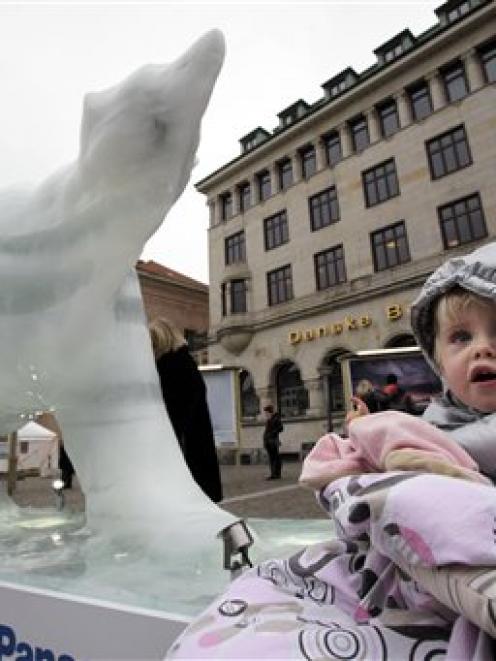 A child is seen next to a melting ice statue of a polar bear in the centre of Copenhagen, Denmark, one day before the Climate Summit begins. (AP Photo/Peter Dejong)
The world is entering talks on a new climate pact with unprecedented unity and leaders must seize the moment to create a turning point in the battle against global warming, the UN's top climate official said today.

At a news conference, Yvo de Boer called on the 192 nations represented at the UN climate summit starting tomorrow (NZT) "to deliver a strong and long-term response to the challenge of climate change."

A study released by the UN Environment Programs indicated that pledges by industrial countries and major emerging nations fall just short of greenhouse gas reductions that scientists have called for - and the gap is narrower than previously believed.

"For those who claim a deal in Copenhagen is impossible, they are simply wrong," said UNEP director Achim Steiner, releasing the report compiled by British economist Lord Nicholas Stern.

Negotiators in Copenhagen are trying to set targets for controlling emissions of carbon dioxide and other global-warming gases, including by the leading contributors, China and the United States. They will also seek agreement on how much rich countries should pay to help poor nations to deal with climate change.

De Boer worried that e-mails pilfered from a British university would fuel skepticism among those who believe that scientists exaggerate global warming.

"I think a lot of people are skeptical about this issue in any case," de Boer told The Associated Press. "And then when they have the feeling ... that scientists are manipulating information in a certain direction then of course it causes concern in a number of people to say 'you see I told you so, this is not a real issue.'"

E-mails stolen from the climate unit at the University of East Anglia appeared to show some of world's leading scientists discussing ways to shield data from public scrutiny and suppressf others' work.

Those who deny the influence of man-made climate change have seized on the correspondence to argue that scientists have been conspiring to hide evidence about global warming.

"This correspondence looks very bad," de Boer said, but noted that the matter was being investigated by the university, police and the head of the UN's expert panel on climate change. He also defended the research - reviewed by some 2,500 scientists - that shows man has fuelled global warming by burning fossil fuels.

"I think this is about the most credible piece of science that there is out there," he said.

US climate negotiator Jonathan Pershing called the science on global warming "very robust, very substantial." He told AP that the controversy surrounding the leaked e-mails came at an "unfortunate" time, just before the long-awaited UN talks, "but has no fundamental bearing on the outcome."

"There has been a lot of this kind of activity going on, there has been suppression of view points," said Roger Pielke, Jr., a professor of environmental studies at the University of Colorado.

De Boer told a news conference that Copenhagen must be a "turning point" in the international response to climate change. He said climate targets announced in the runup to the summit were boosting the chances of success - even though they fall short of what scientists say is needed to avoid dangerous levels of warming.

"Never in the 17 years of climate negotiations have so many different nations made so many firm pledges together," De Boer said. "It's simply unprecedented."

De Boer told AP "it's going to be two weeks of thorough negotiation to try and get the ambition level up and to get the financial specifics on the table."

The UNEP report said all countries together should emit no more than 44 billion tonnes of carbon dioxide by 2020 to avoid the worst consequences of a warming world.

Computing all commitments publicly announced so far, the report said emissions will total some 46 billion tonnes annually in 2020. Emissions today are about 47 billion tonnes.

"The gap has narrowed significantly," Steiner said. "People overestimate the possibility of closing that gap." He cautioned that the figures included many variables, and assumed that all countries would carry out the maximum they had promised so far.

The European Union approaches that target, pledging to cut emissions by 20 percent below 1990 levels, and more if others agree. Awaiting US congressional action, however, the Obama administration could make only a provisional offer of a 17 percent reduction by 2020 from 2005 levels. Against 1990, that represents only a 3 to 4 percent cut, experts say.

The developing world, for the first time, is offering its own actions: clean energy projects and other steps to slow the growth of their emissions.

China says it will, by 2020, reduce gases by 40 to 45 percent below "business as usual," that is, judged against 2005 figures for energy used versus economic output. India offers a 20 to 25 percent slowdown in emissions growth.

De Boer said China's commitment alone amounted to about one-fourth of the action needed to meet scientific predictions that the Earth's average temperature would increase no more than 2degC above preindustrial levels.