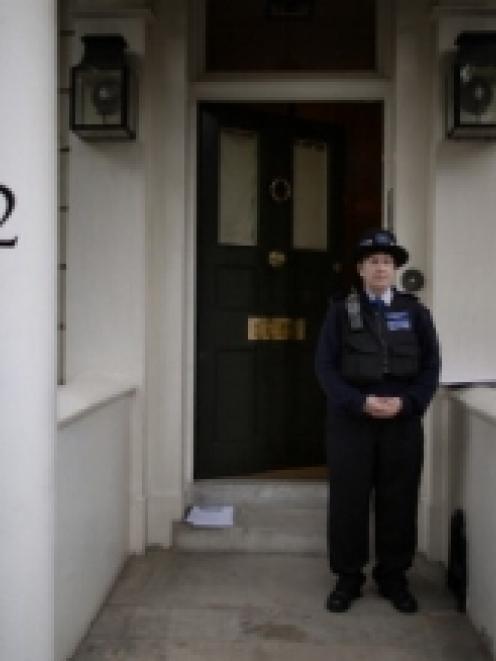 Police tape lines the outside of the house of Eva Rausing in Knightsbridge, London. (Photo by Peter Macdiarmid/Getty Images)
The American wife of an heir to the Tetra Pak carton fortune was found dead in London, police said, and a man who may be Eva Rausing's husband was arrested in connection with her death and on suspicion of drugs possession.

Police described the arrested man only as being 49 years old, the same age as Hans Kristian Rausing, the London-based philanthropist son of Swedish packaging billionaire Hans Rausing, one of the world's richest men.

British media said the arrested man was "believed to be" the younger Rausing, and that he had been arrested after a search of the couple's home in the wealthy Belgravia district where Eva Rausing, 48, with whom he had four children, was found dead.

Police said the detained man was having medical attention and that the murder squad had been investigating since Eva Rausing was found dead in Belgravia on Monday.

The couple have had well publicised struggles with drug addiction - they were reported to have met at a rehab clinic.

In 2008, they were arrested and charged with drug possession after Eva Rausing, daughter of American businessman Tom Kemeny, was found carrying crack cocaine and heroin into the U.S. embassy in London. Charges were later dropped.

"I have made a grave error and consider myself to have taken a wrong turn in the course of my life," Eva Rausing was quoted as saying shortly afterwards.

Hans Rausing, whose father founded Tetra Laval in 1944, moved to Britain in the 1980s. He sold his share of the business, which produces the ubiquitous drinks cartons, to his brother in the 1990s. Hans Rausing has two daughters and one son.

Forbes magazine estimates 86-year-old Hans Rausing is worth $10 billion, making him the 88th richest person in the world.