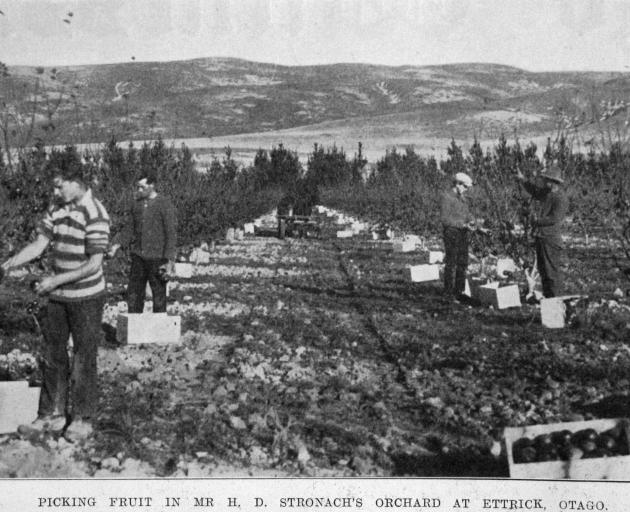 Picking fruit in Mr H.D. Stronach’s orchard at Ettrick, Central Otago. — Otago Witness, 21.6.1921.
The Dunedin Winter Show afforded the Alexandra district an opportunity to demonstrate its claims to be right in the forefront in the fruit growing districts of Otago. The district was represented by 150 entries, and no fewer than 56 prizes were secured, including the award in the champion plate class — four dessert and two cooking apples. Mr J. Wing (Earnscleugh) was the winner in this class, and Mr Werner (Alexandra), who was only half a point behind, was the runner-up.

Some varied expressions of opinion were voiced at the Farmer’s Union conference yesterday while the following remit, standing in the name of Mr D. Cameron, of Oamaru, was under discussion: “That this conference again protests against the action of some magistrates ordering undesirables to the country districts.” In moving the remit, Mr Cameron said he had not heard of any case of the kind, but he took it that such decisions had been given because the remit would not otherwise have been passed previously. Mr W.S.D. Trotter moved that the remit be dropped, as no case of the kind had occurred recently, but this view was opposed by several speakers. Mr Jasper Clark suggested that additional state farms should be established, where undesirables could be placed and kept together. Another delegate: “What about sending all the undesirables in the country into the towns.” A chorus of voices: “There are no undesirables in the country.” After the chairman, (Mr J.A. Macpherson) had summed up, it was decided to forward the remit to the dominion conference, and also the Minister of Justice (the Hon E.P. Lee).

The meeting  of the Otago provincial council of the New Zealand Farmers’ Union held yesterday had before it the following important remit, brought forward in the name of Mr James Begg: “The practice of leaving money on deposit at call with commercial firms has grown up largely because the banks do not pay interest on credit balances. The evils of the practice have been made apparent by the recent enactment of a moratorium covering these deposits. We suggest that steps be taken to bring pressure to bear to compel the Bank of New Zealand to pay reasonable interest on current accounts, as is done in other countries. If this were done, other banks would have to fall into line and the practice referred to above would be minimised.” It was decided to adopt the remit and forward it on to the dominion conference.

Mr H.G. Ell, following his policy of dedicating rest-houses on the Port Hills (Christchurch) to native birds (says the Lyttelton Times) has arranged to have a sign of the Takahe, known sometimes as the Notornis, hung on the new rest- house at the tram terminus. The sign will be larger than life size, but the natural colours and the bird’s characteristic attitude, as far as it is known, will be reproduced. The colours in the handsome plumage are olive green, light blue, purplish blue, and blackish blue. Contrasting with these there are crimson legs and feet, a crimson bill and a crimson shield on the forehead, going backwards over the eyes. Only four specimens of the takahe have been found. Two of the specimens are in the British Museum, one is in the Dresden museum, and one is in the Otago Museum. 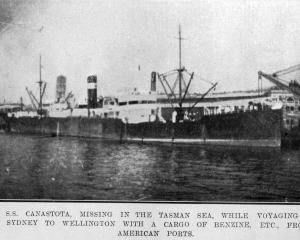 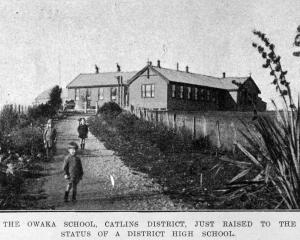 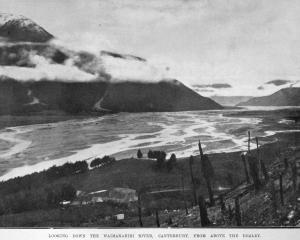 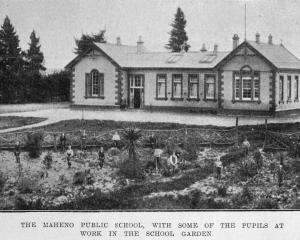 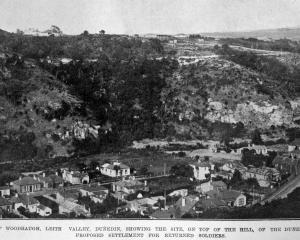 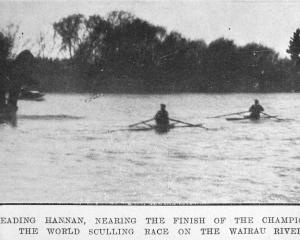 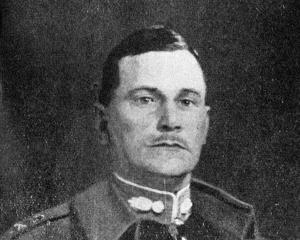 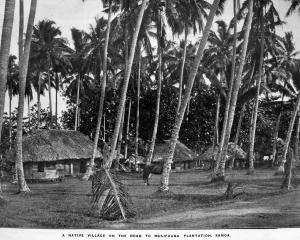