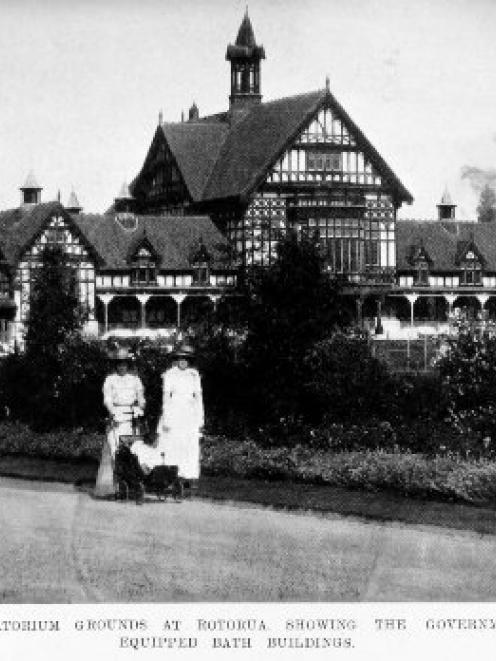 A scene in the sanatorium grounds at Rotorua, showing the Government's splendidly-equipped baths buildings. - Otago Witness, 3.9.1913.
At the quarterly meeting of the Wellington Licensing Committee on Monday (says the New Zealand Times), Superintendent Ellison spoke strongly on the subject of women loitering in hotels.

He stated that in the Magistrate's Court on the previous Friday morning several women were charged with being idle and disorderly persons, in that they did habitually consort with reputed prostitutes, while the evidence indicated that frequently two and three, and sometimes four or five, of these women were seen congregated together in the Royal Tiger and Cricketers' Arms Hotels.

The superintendent went on to say that he had told the licensees that he would mention the matter at the committee meeting, so that they could attend if they desired. Under section 162 of the Licensing Act, said the superintendent, it was conceded that women had the right to drink in an hotel, but the licensees of such houses could not expect anything but a bad report if they fostered and encouraged a trade with this class of women.

The licensees would also find great difficulty in getting a transfer to another house if they wanted it.

Women had the same right to obtain drink as a man, but they should remain in the hotel only a reasonable time for the consumption of liquor. In the cases referred to, the police found hordes of women congregated together drinking, and he contended that those houses were badly conducted.

If any strange young man fell in with ''these harpies'' at an hotel, continued the superintendent, he would be in need of a young men's protection society. Dr A. M. Arthur, S. M., stated that the committee desired him to say that they would support the superintendent in every respect.

• During a discussion on charitable aid at the Portobello Road Board yesterday it was stated that there were only two recipients in the district.

Through the generosity of a settler one of them (a woman) was allowed to occupy a small house rent free, but it was stated that on that fact becoming known to the Charitable Aid Board her allowance was reduced from 5s per week to 3s. Mr Hinkley thereupon remarked that the gentleman referred to was thereby making an extra contribution to the charitable aid rates, and members agreed that the board was taking an undue advantage by reducing the recipient's allowance.

The other recipient (an elderly man) received a very small allowance, due in part to this own admission that he found employment in gardening.

A member caused a good deal of surprise by stating that the old man was paid 1s per day, but received no payment for wet days, nor did his wages include meals. Several members summed up the position in very strong terms, and, as the board considered that

the old man was being penalised through a mistaken estimate of his own ability, the clerk was instructed to write to the Charitable Aid Board advising it of the actual position of affairs.

• The Southland Times states that an accident befell a man named Menzies at the Southland Sawmilling Company's sawmill at Pukewai, on the Waimahaka line, on Monday morning.

He was engaged as trollyman, and by some means or other, which has not transpired, a tree fell on him, and did considerable injury to his head and face. On inquiry at the Southland Hospital, where he was taken on arriving in town, it was ascertained that his injuries are not serious.