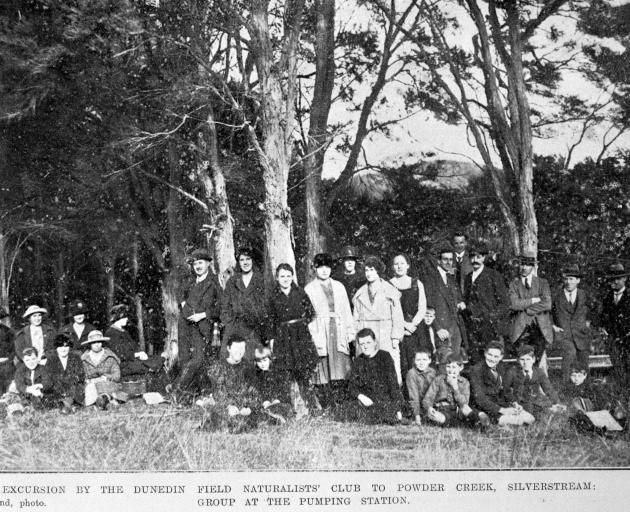 Dunedin Field Naturalists' Club excursion to Powder Creek, in the Silver Stream valley. — Otago Witness, 13.6.1922
The fortnightly meeting of the Field Club was held on Saturday last, when about 20 members and friends proceeded by motor (via Mosgiel) to Powder Creek.

The day was fine, but the time at the disposal of the club was far from sufficient to make a complete survey of the area. Had it been summer-time instead of winter additional records would have been made.

As it was some 80 flowering plants and 29 ferns were noted.

Much of the vicinity was clothed with manuka merging into bracken as the slopes were ascended, and it was therefore in the stream valleys that most of the other plants were met with.

The most interesting record for the day was a rare filmy fern, Hymenophyllum atrovirens, at present known to occur elsewhere in this district at only one small spot on Morrison’s Creek.

Altogether, seven species of filmy ferns were gathered. Blechnum vulcanicum appeared to be more common there than elsewhere in the district, while the prostrate tree fern Alsophila colensoi occurred commonly in the bush, the common Dicksonia being apparently absent.

Special note was made of specimens of the trailing spleen wort, Aaplenium flobellifolium, which developed at the tips of the fronds young plants, the fronds of which repeated the development of young plants at the ends of their fronds, and so on for four series.

This is an unusual occurrence and may not have been previously noted.

For some time past, university men about Dunedin have felt the need for the establishment of a university club, to be run on lines similar to those of other existing clubs in the city.

It is believed that such a club would not only afford university men opportunities to meet together, but would tend to maintain in the city a corporate university spirit, and would emphasise the importance of the university in the community.

It is suggested that the membership be confined to graduates of British and colonial universities and to professional men of corresponding standing.

The project of establishing rooms in a central part of the town with all the equipment of a club is a large undertaking but a small society is already in existence with this object in view.

Those especially interested feel that the time has come to make a forward move, and they are taking steps just now to ascertain the measure of support they may expect from those eligible to join such a club.

A correspondent informs us of an incident last week which should serve as a warning to children who play about railway bridges.

A boy, one of the number of children who were playing on the bridge over the Waipahi river near Arthurton, got his foot wedged between two sleepers , and was unable to extricate it. While he was in this predicament a heavy goods train from Waipahi came in sight.

The other children had the presence of mind to run towards the train, to warn the driver, who, noticing them, stopped the train, and the fireman released the boy.

As it happened the train was on an up grade and the driver had a good view of the bridge.

Had the train been proceeding the other way, it would have been on a down grade and would have emerged on the bridge before the driver could see the boy, and nothing could have saved the latter’s life.