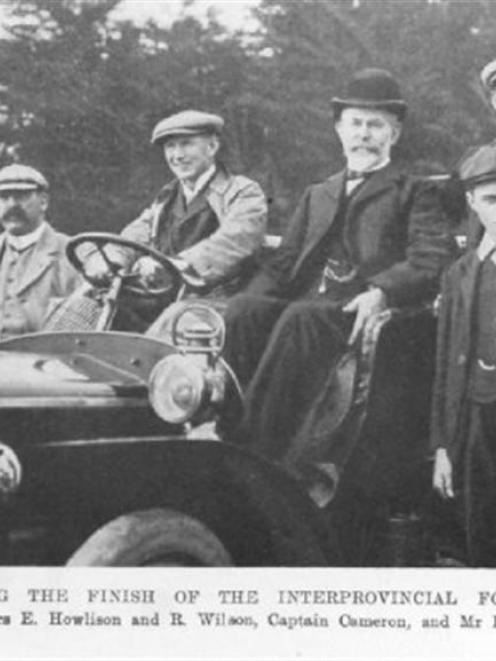 Watching the finish of the inter-provincial rowing fours at Lake Waihola, from left: Messrs E. Howlison and R. Wilson, Captain Cameron, Mr Le Cren and unnamed boy.- Otago Witness, 31.3.1909.
At a meeting of the Canterbury College board of governors this afternoon a letter was read from Professor Rutherford thanking the board for its congratulations on the award of the Nobel Prize.

The Professor stated that he was pleased that those connected with his Alma Mater wished him well on this occasion.

He had a happy remembrance of his old college days and of his first researches in the basement of one of the lecture rooms.

"I learnt more of research methods," he said, "in those first investigations under somewhat difficult conditions than in any work I have done since.

"If there is any credit to be apportioned for winning the Nobel Prize I think that the Canterbury College may take a fair share, for it was there that I was well trained in mathematics and physics by Professor Cook and Professor Bickerton.

"Both were excellent teachers, and Professor Bickerton's genuine enthusiasm for science gave a stimulus to me to start investigation on my own account.

"I may mention that the Nobel Prize was awarded to me in chemistry and not in physics.

"I was rather startled at first at my sudden transformation, but the work upon which I have been engaged for the last 10 years may be called physics or chemistry at will."

• Last evening a meeting was held in the board room of the Early Settlers' Hall for the purpose of forming a social club composed of the descendants of the early settlers.

There was present a large number of those interested in the movement, and it was decided to form a club of 50 members, the annual subscription to be 2s 6d.

Mr John Wood was elected chairman, and explained that what was wanted was that the young men should become associated with the parent body, so as to be able to carry on the work in after years and to become better acquainted with each other by holding social evenings.

All descendants over 16 are eligible for membership, but are expected to join the O. E. S. A. when 21.

In conjunction with the Ladies' Club a social evening and dance will be held once a month.

Meetings of members will be held every second and fourth Monday in the month, but the first meeting will be held on Monday, April 19, for which a progressive euchre party has been arranged.- ODT, 30.3.1909.