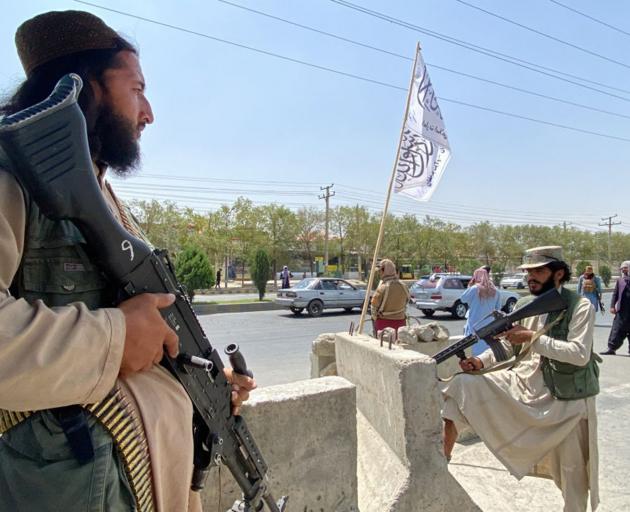 Taliban fighters stand guard at an entrance gate outside the Interior Ministry in Kabul this week. PHOTO: GETTY IMAGES
Richard Jackson looks back at the failures which led to the Taliban taking control of Kabul.

As I watch the Taliban walking through the presidential palace in Kabul, I can’t help but think about a series of articles I published in the ODT in late 2001 and then again in 2012. I predicted then that the United States was making a mistake in invading Afghanistan and the so-called ‘‘war on terrorism’’ was ultimately going to end in humiliating failure.

I argued that a ‘‘war on terrorism’’ was misconceived and the United States was acting out of hubris in regards to its military power. I remember the irate letters to the editor accusing me of being an ivory tower naysayer who knew nothing of the real world.

The scenes we are witnessing in Afghanistan represent a failure on an almost unimaginable scale.

The United States spent more than $2 trillion and lost more than 2000 troops over 20 years attempting to pacify, stabilise and reconstruct the country. For the people of Afghanistan, the cost of foreign intervention was even higher: more than 200,000 lives lost, countless injured and displaced, and two decades of unending insecurity and instability. The US has literally nothing to show for all this waste of lives and treasure, and this defeat will likely rank up there with the defeat in Vietnam in the annals of US military failures.

Certainly, when you see the helicopters flying embassy staff out, it’s difficult to see the difference between the fall of Saigon and the fall of Kabul. And yet, this was an utterly predictable outcome, especially if you read the so-called Afghanistan Papers released by the Washington Post in 2019.

The defeat in Afghanistan first and foremost signals the absolute failure of military force as an instrument of national power in today’s world.

For some time now, researchers have noted that the most powerful military powers in the world are no more likely to win wars than weaker states, and are in fact, winning wars less often. The failure of all the major powers of their day to conquer Afghanistan — the British in the 19th century, the Soviet Union in the 20th century and the United States in the 21st century — is a clear illustration of the limits of military force, as are the US military failures in Vietnam, Lebanon, Somalia, Libya, Iraq and Syria. It turns out that the latest drone technology, sophisticated missiles, superior air power, supercarriers and 100,000 highly trained troops are no match for men with old Kalashnikovs, pick-up trucks and the will to fight. The clear lesson here is that military force is mostly useless if you want to create long-term security, peace, democracy and development, especially in another's country.

The US failed in part because they didn’t recognise that violence creates the conditions for further violence, and almost always rebounds on the perpetrator. The US failed to limit or control the violence they unleashed against the people of Afghanistan, and put security above human rights. The massacres of captured Taliban prisoners in late 2001, the torture of insurgents and civilians at Bagram and Guantanamo over many years, the weekly drone strikes which have killed so many innocent civilians, the political compromises with former warlords, the gross corruption of the government elite, the so-called ‘‘kill teams’’ who desecrated the bodies of Taliban fighters, the public disrespect of US troops towards the Koran — all of this violence undermined the moral purpose of the mission and contributed to the determined counter-violence of the Taliban. The lesson here is that you have to match means and ends lest the ends become overwhelmed by the means. If you want to create peaceful, human-rights-upholding societies, you have to use peaceful, human-rights-upholding means to get there.

Lastly, the US failed in Afghanistan because they tried to apply a model of state-building based on the ideology of the free market, liberal politics, a modern military and Western-style state institutions. This is a blueprint which has been imposed in numerous post-conflict states around the world in the past few decades, but which can count few successes. This is because it is based on the same hubris as the reliance on military force: it assumes that every society wants to be just like the West and that pacification is the same as peace. In this respect, it is another form of colonial violence imposed on those deemed inferior. The failings of this liberal model of peace-building have been well documented by peace and conflict studies researchers for many years.

In the end, what the failures in Afghanistan tell us is that we have to find better, more appropriate and culturally sensitive ways to resolve conflicts and build peaceful societies. Military force and the use of coercive power not only will not work; it cannot work because its fundamental purpose is to destroy, not build.

Tragically, it is the people of Afghanistan who will pay the biggest price for these hubristic failures. Given that New Zealand shares some responsibility for this tragic situation, as the Burnham Inquiry found, it is incumbent upon the Government to try to make amends and work to ameliorate the humanitarian crisis.

The ivory tower naysayers were right after all. The wages of violence are simply more violence and the endless suffering of the innocent. You cannot bring peace with a sword.

• Prof Richard Jackson is the director of the National Centre for Peace and Conflict Studies.

"You cannot bring peace with a sword."

Yes, you can - if you are prepared to wield it with enough vigour and fight the issue with all parties completely to the finish. For example:

In all other cases where one participant is not utterly defeated and negotiation is neither necessary nor meanginful, and particularly the festering stalemates so beloved of the United Nations (aka 'peacekeeping missions'), and in any form of proxy war where undefeated adversaries remained involved, the professor is absolutely correct.

This can be particularly clearly perceived in WWII. The Allies realised early on that the main reason why they were fighting that war was that they did not finish the job properly in 1918. German rearmament for potentially aggressive purposes did not start with Hitler, but was under way by 1922. The U boat (an aggressive weapon) is a good example. The Allies did not make that mistake again, and early on in the war, after the three major Allied powers had emerged, made it perfectly clear to their adversaries that unconditional surrender was the only offer on the table.