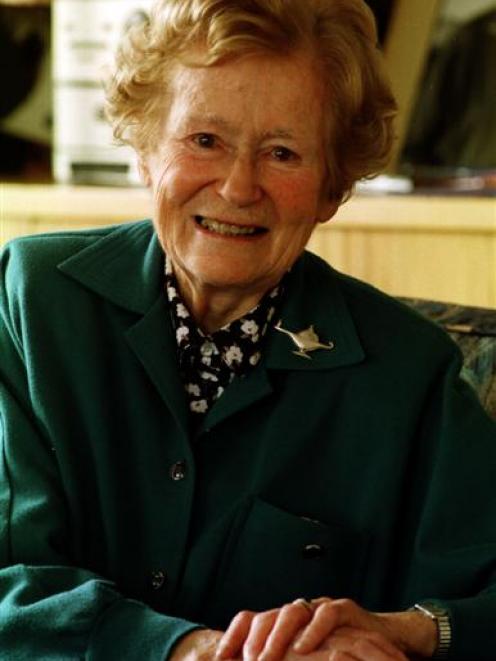 Dame Daphne Purves
Dame Daphne Purves taught Roy Colbert Latin in the early 1960s. She had a monstrous intellect, and a further attribute that demanded respect from hormonal 14-year-olds: she was the mother of a Miss Otago.

Mrs Purves was the best teacher I ever had.

She taught me Latin at Otago Boys High School in 1962 and 1963, my junior school years.

She believed simply in patient instruction, learning the words and doing the work.

There were no short cuts.

You behaved in her class, you didn't waste a minute of valuable learning time.

This might not sound as inspiring as some kids' memorable teachers, but she made me learn, and in a way I didn't mind.

At Otago Boys High then, a boy could be caned for just about anything.

I was caned for talking in assembly, my furtive whisper among the heads of 800 boys somehow spotted.

Four strokes from the Rector.

The three woman teachers did not cane, but they could have you caned.

Mrs Purves never did that.

She knew all about classroom control, which she didn't achieve by being big and loud and scary and male.

Mrs Purves was small and slim.

She just did it with her eyes.

You need control of third and fourth-form boys.

Third-formers - we were called stinkers; now we would be called year 9 - are as silly as soap, far beyond Ritalin anaesthesia.

And fourth-formers are ridiculously worse.

The post-school "gap" year now fashionably taken by boys seemingly not ready for university would be better taken in year 10, when they could all be sent out into the forest to live with wolves.

Teachers would benefit from that too.

Control of a Latin class had its own peculiar difficulties.

What were we doing Latin for? How would we ever use this antediluvian tongue?

We enviously looked over at the science building, where our classmates were learning chemistry to go home and make gunpowder, crude rockets, and, later on, rotgut liquor.

So we sat in Latin with a defensive pout; it took a very good teacher to make this subject work.

She knew everyone wanted to slump against the gurgling oil heaters that ran along the back wall, heaters which made life almost tolerable in the ice-cold Latin room in the top corner of the Tower block.

So the best-performed in her daily vocabulary tests were allowed to sit there.

The worst-performed sat down the front, right under her unwavering nose.

I was constantly brought back to that nose after loosening the learning reins.

You appreciate a good teacher when you can watch them from that close.

Mrs Purves' second weapon was solely our own doing.

Even though we were toothbrush-daft, we still rated our ability to spot a monstrous intellect when we saw one, and Mrs Purves clearly had one of these.

But she had one more thing that only a junior boys' school class could truly appreciate - one of her daughters, Hilary, was Miss Otago.

A few years ago, an old teacher told me how moved he had been when a former pupil sought him out to say how much he had appreciated his teaching.

I thought then I would go and see Mrs Purves.

The time ebbed by.

She wouldn't remember me, I thought, she was in her 90s, she'd be frightened if a stranger turned up at her door.

And then I couldn't go any more.

I sat at the back of her funeral last Saturday and listened to the tributes.

Dame Daphne was always interested in other people most of all, they said.

I really should have gone.