Beginnings are easy, continuing is hard 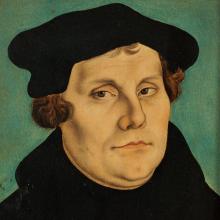 In just over two months many in the Western world will acknowledge the moment, 500 years on, when Martin Luther nailed his 95 theses against indulgences to the church door at Wittenberg in Germany.

That otherwise innocuous event on October 31,  1517 triggered something Luther initially never intended: the breaking apart of what had been, until then, the one Catholic Church in Europe; and the creation of a new, Protestant Christianity.

So this year we will focus on beginnings.  But it turns out to be easier to begin a movement than it is to complete it.  I would like to look at Luther at a later moment, when he preached a sermon on the cross and suffering in April 1530.  He and his followers were about to be condemned by the Emperor Charles V at the Diet of Augsburg and they would issue their ‘‘protestation’’ in response, which gave them the name Protestants.

In his sermon Luther drew on a much earlier story of Saint Christopher, a third-century Christian martyr who is taken to be the patron saint of travellers.  Luther, who had little time for such saints, called it a fable, but it was a meaningful fable.  In that story Christopher carried a child across a river.  As he progressed the child became heavier and the river grew deeper and more turbulent.  Both nearly drowned.  When they reached the other side the child was revealed as Jesus Christ (the name Christopher means ‘‘to bear Christ’’).

By 1530 Luther was in the middle of the river.  The child he was carrying, which had been so light and easy at the beginning, had now grown heavy.  The waters were threatening to pull him under and drown them both.

For Luther, the child was the good news of salvation by faith alone through grace alone.  In those early years many German Christians had responded to that new gospel with enthusiasm: "no oven was as hot as the people were then".

Now he worried that they were wearied, apathetic and unreformed in their own lives.  The waters were Luther’s varied enemies that surrounded him, distracted him and sought to destroy him: his Roman Catholic opponents who tried to crush the movement he had begun; his own body that was breaking down in regular bouts of pain and illness; and the inundation of endless demands on his leadership.

Beginning was easy; going on was hard.  And so it is in the Christian life.  It is a grave mistake to confuse Luther’s message of free grace in Christ with a life of comfort — that is something he never preached.  To follow Jesus is to follow him to the cross, and there is nothing comfortable about a cross.

"We should therefore know", said Luther in his sermon, "that in this life we shall have no rest if we are bearing Christ".  Suffering is the uniform of the Christian: "If I want to be a Christian, I must also wear the colours of the royal court; the dear Christ issues no others in his court; suffering there must be".

Luther was not saying that the Christian life is one of unrelenting suffering with no relief, comfort or happiness, but suffering is an unavoidable part of following Jesus in faithfulness.  Is Luther’s message of good news really bad news?  No, because of what awaits on the other side of the river.

There is great comfort in knowing that our suffering is not a sign of God’s disapproval, and he is present with us in the midst of it.  Luther imagined a strong tree — God’s promise and assurance in Christ — that we can hold on to as we make our way through the turbulent waters.  He urged his followers to focus not on the river "so that we see nothing but its rush and roar" but on the consolation of God in Christ and the promises of his word.

"For this is the Christian art, which we must all learn, the art of looking to the Word and looking away from all the trouble and suffering that lies upon us and weighs us down."

Luther was very clear that this suffering was not something we seek for ourselves; it is something that will find us soon enough.

"For God has appointed that we should not only believe in the crucified Christ, but also be crucified with him."

If we are finding it hard going, in whatever dimension of our life, that is in the nature of crossing rivers.  The most danger lies in the middle.  Luther’s encouragement is to keep going, hold on to that branch above us, and fix our eyes on the other shore.

- Tim Cooper is associate professor of church history in the Department of theology and religion at the University of Otago.

If the message is that suffering is predestined, it is doctrine of 'Nonconformist' Protestantism. Others, eg 'High Church', might contend that we possess the human capacity to make suffering happen less often.