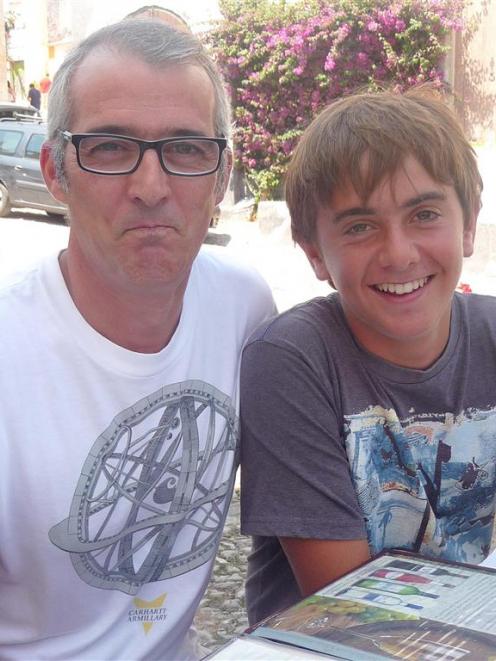 Like most in this country, I am proud of the successes and attractions of our nation. But today I am ashamed to be a New Zealander.

Like Otago Daily Times columnist Lisa Scott, who was treated callously by a United States immigration department that refused her entry to its country, my family has also been hit by a gut-wrenching visa decision that will have far-reaching ramifications.

This time it is the New Zealand immigration department that has done the damage.

Our close friend Mario Quintela ("Quintas'') was last week sent back to his native Portugal at Auckland Airport because immigration officials did not believe his intentions in coming to stay with us for three months were "genuine''.

To put this into perspective, there are some things to note.

My Portuguese husband has lived in New Zealand with me and our three children for 15 years, doing the cliched "giving up everything he has ever known'' to live in a country as far away from Portugal as you can get.

But the cliche doesn't do the sacrifice justice: he (and I) have missed funerals, weddings and everyday life in Europe that have left a hole in our lives only barely filled by our trips back there every three years.

These trips are vital, because but for a cousin who called in for several days seven years ago during a month-long trip to New Zealand, no-one from Portugal has been to visit us.

Not his parents, not any other family members, not a single friend.

We sometimes resent this, but enjoy our trips to Portugal so much we just try to make the most of the lifestyle we have.

So when our friend Quintas said he was coming to see us it was big news.

We hoped it would spur others to realise they could do the same.

But thanks to Immigration New Zealand, the chances of anyone from Portugal coming to see us would be zero, I'd say, and my husband and I will struggle to show our faces again in Portugal again, too.

Despite Quintas having a return ticket, money, medical insurance, details of his residence with us and pledges from us to support him, immigration officials told him (after 10 hours of waiting and interviews at Auckland Airport) they did not believe he was only coming for a holiday, and (after another 20 hours at the airport) sent him back before he even officially arrived.

The immigration officials gave no concrete reason for refusal of entry other than they did not believe he was only here for three months and suspected he would not return to Portugal.

If you knew the beauty of my husband and Quintas' hometown (Peniche) and the Portuguese culture, the cast-iron nature of the apron strings of Portuguese mothers and the strength of a Portuguese man's word, you would know this is a joke.

The cold and heartless immigration woman told me as I cried down the phone that our friend could try to return to New Zealand if we officially sponsored him, but we weren't allowed to do that immediately, to try to reverse the decision.

And the state of the Portuguese economy makes that offer sheer lunacy.

He used years of savings to buy his ticket.

As long as they meet standard health and character requirements and are coming for a "legal purpose'', they will be able to stay for three months, the Immigration New Zealand website says.

It is almost impossible to explain the impact the decision has had on our family and the shame and sadness we now feel.

After years of trying to convince someone (anyone!) from Portugal to come and see us, the first person to do so was treated like a liar and criminal and sent back home without even being able to see us.

We now know no-one from Portugal will come to see us.

Why would they when faced with the possibility of losing all the money they spent on air tickets and being sent back from Auckland Airport?

I told the immigration woman the decision would destroy our family and my husband would not want to live in New Zealand any more, and I wasn't joking.

My husband has been generous enough to make his life in New Zealand, and as a family we were generous enough to host our friend in our home for three months (returning the favour of the many Portuguese friends and family who do that for us on our trips there).

Is the prospect of someone inviting someone to their home without charging them board impossible for New Zealand to understand?

I am disgusted, appalled, embarrassed and sickened by our friend's treatment and will never come to terms with it.

Central Otago is swarming with foreigners working or travelling right now, and New Zealand is set to welcome hundreds of Syrian refugees.

Why are they allowed to come to New Zealand when our friend is not?Immigration New Zealand seems to be beyond the law, and be judge, jury and executioner, almost with its own justice system, and with some questionable human traits to boot.

Only one person we spoke to in our pleas showed a glimmer of humanity.

The other four were clipped, clinical, monosyllabic and unfeeling.

We were initially told the decision could not be appealed, but then later informed we could apply for a judicial review and take Immigration New Zealand to court (of course after our friend had already been sent home).

We all value the rules and assistance New Zealand residents receive from immigration officials' weeding out of terrorists, drug dealers and those arriving with the intention of sponging off our taxes.

But our friend's case shows a lack of common sense and humanity that turns PC New Zealand into a dangerously narrow-minded and elitist country.

Immigration has misjudged a man with sad consequences.

I am ashamed to be a New Zealander today. But Immigration New Zealand should be ashamed of itself, too.

● Pam Jones works as a journalist for Allied Press, owner of the Otago Daily Times, in Central Otago.