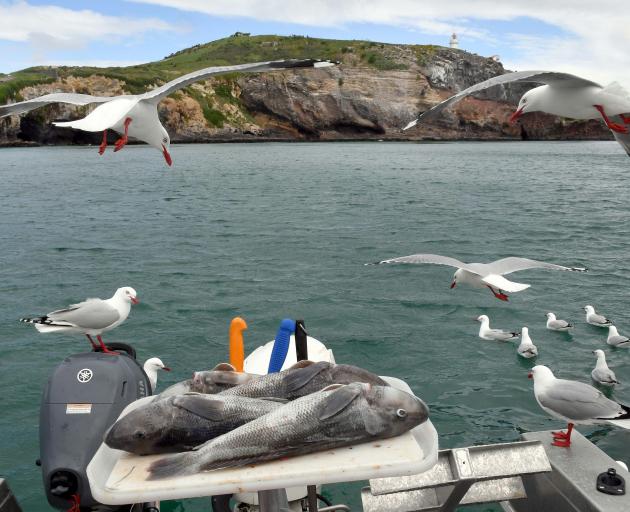 A recreational catch of blue cod and Taiaroa Head lighthouse behind. PHOTO: STEPHEN JAQUIERY
Changes to the blue cod fishery are under way. However, there is a catch, writes  Randall Bess.

New Zealand’s sovereignty within its 12-nautical mile territorial sea is subject to rights and duties under the United Nations Convention on the Law of the Sea (UNCLOS). As a signatory to UNCLOS, foreign vessels have the right of ‘‘innocent passage’’ in New Zealand’s territorial sea.

The right of innocent passage also applies to domestic vessels. It even applies to no-take marine reserves. The public has the right to access these reserves, even when transiting through with fish on board caught outside the reserves.

However, the management of blue cod has brought about some exceptions to the right of innocent passage, beginning in the Marlborough Sounds.

In 2015, the two-fish daily bag limit was applied to both the Marlborough Sounds and the Challenger (East) area, thus removing the ‘‘transit rule’’.

In 2017, Fisheries New Zealand (Ministry for Primary Industries) began developing a National Blue Cod Strategy, though its focus has been largely on the South Island blue cod fishery. The strategy’s rule changes go into effect on July 1.

However, some discrete areas have different daily bag limits. Inside the Kaikoura Marine Area the daily limit is six blue cod.

The inner fiords have a daily limit of three blue cod, with certain Sounds having a one blue cod limit. Inside taiapure the daily limit is two blue cod.

Here’s the catch. When fishing in an amber or green area but needing to transit through a red or amber area, respectively, to return to where your boat was launched, you must not exceed those areas’ lower daily bag limits.

In other words, there is no ability to transit through an area with a larger catch taken outside that area. This ‘‘transit rule’’ impacts on fishing in the Kaikoura, Canterbury and Otago regions.

For example, after fishing in the green area (15 blue cod limit) south and east of Taiaroa Head, you will be limited to 10 blue cod when transiting through the amber coloured Otago Harbour.

Even if your favoured fishing grounds are beyond the 12-nautical mile territorial sea, the day’s catch must not exceed the lowest daily bag limit area that you must transit through to return to the launch site.

While it is illegal to catch the daily bag limit in one area, then catch the limit in another area, there are exceptions for taiapure and the inner fiords (red areas).

You can take the lower bag limit and then fish in the surrounding area to take the higher bag limit.

You can also transit through the inner fiords and certain taiapure with catch taken outside those areas. In other transiting situations the lowest bag limit applies.

It is highly advisable that you carefully consider all blue cod rule changes in your area and surrounding areas before fishing from July 1 at www.fisheries.govt.nz/rules

You will have opportunities to provide feedback on the rule changes.

A suggested solution for transiting through Otago Harbour is a corridor for the innocent passage of the 15 blue cod daily limit taken south and east of Taiaroa Head.

- Dr Randall Bess is an adviser for Fish Mainland, a not-for-profit organisation whose purpose is to co-ordinate, represent, and promote the interests of the South Island marine recreational fishing community.