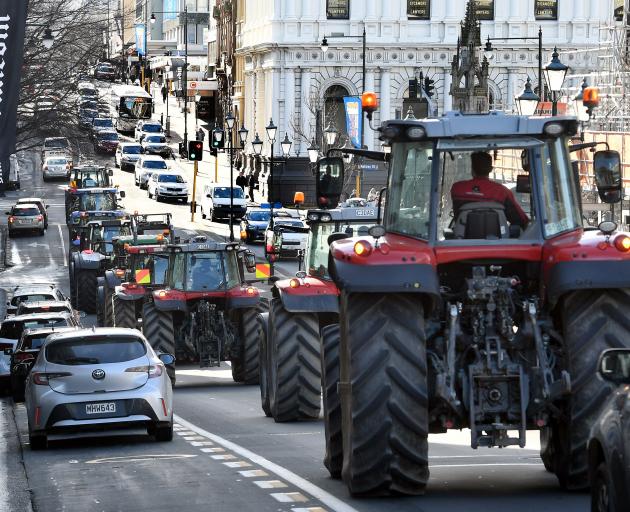 The Howl of a Protest in Dunedin on July 16. PHOTO: STEPHEN JAQUIERY
Bruce Mahalski calls for unity in the wake of the recent Groundswell protest.

I’m a member of Extinction Rebellion.

We didn’t have any sort of organised counterprotest in Otepoti/ Dunedin against the Groundswell protest on Friday for several reasons, health and safety being one of them. One person who did go down was abused and her sign was ripped out of her hands and destroyed.

Some people seem to think it’s ‘‘easy’’ being a protester and we like getting freezing cold, trolled, abused, beaten up and arrested for trying to save what’s left of our eco-system. People tell me I shouldn’t be surprised or complain when people assault us for merely standing somewhere holding a sign but so far not one Extinction Rebellion protester has been successfully convicted of assault in this country and non-violence is an important part of our kaupapa. Naturally, the vast majority of us don’t enjoy being abused or assaulted but our consciences demand we try to push for some positive changes so we can all look our children and our grandchildren in the face on this dying planet.

We’re not asking everyone to turn into some kind of carbon-neutral saints. We don’t want to ‘‘burn down the system’’ as someone accused me of the other day. We’d rather give it a cool drink and a massage. We just want things to move a bit quicker! We’re not a bunch of extremists. We’re just a pressure group made up of people of all ages, from all walks of life, including students, trades people, academics and yes — even members of the agricultural sector.

Some people say we won’t listen to reason but many of us are fed up with hearing people tell us they’re doing all they can to the best possible job (of farming/mining etc) and if it wasn’t for them, things would be much worse. Nevertheless, our emissions keep on going up, the temperature records keep breaking, the droughts and the floods and the extreme weather events keep happening. Of course, most of us still write letters to newspapers and lobby local politicians and put in submissions to things like the Climate Commission Report but all of the academic research shows that a mix of both lobbying and activism are the most effective methods for bringing about rapid social change.

It may seem like our emissions are small beer but this country is a significant emitter — the 21st highest contributor in the world and fifth highest within the OECD. We are also lagging behind on climate action. The 2021 Climate Change Performance Index ranking put us in 28th place, well behind countries such as the UK, Mexico and India.

We believe it’s simply no longer acceptable to continue at a snail’s pace with regard to climate change and ecological collapse (as well as inequality and poverty) and it’s very depressing to see people abusing each other when the Government suggests some small measure such as taxing their vehicles. If humanity is to survive we’re all going to have to make some sacrifices.

Some people claim the farming industry is clean, green and ‘‘carbon neutral’’ but this is just ‘‘greenwash’’. In one way or another the industry is responsible, or at least partially responsible, for the pollution of our fresh waterways, the uncontrollable emitting of one of the most toxic greenhouse gases (methane), the ongoing burning of coal to turn liquid milk into powder for export, the deforestation of our native bush, degradation of our soils as well as enabling the war in Western Sahara by being the world’s biggest importer of phosphate from this contested area.

We didn’t see farmers protesting government intervention when their industry received the best part of a billion dollars in support for Mycoplasma bovis. We didn’t see them protesting at the hundreds of millions of dollars they received in irrigation subsidies. Or at the drought or flood relief packages, or the Covid-19 wage support. If the tiny measures the Government wants to introduce caused a ‘‘howl’’ of outrage, just wait until they find out about the Emissions Trading Scheme.

Can we all please cool some of the rhetoric and have some calm conversations in both the real and online worlds without raising our voices or getting nasty? Farmers and ‘‘townies’’ both want to see a secure future for their children and their grandchildren. There is no ‘‘us. There is no ‘‘them’’. There’s just us. Please can we all work together!