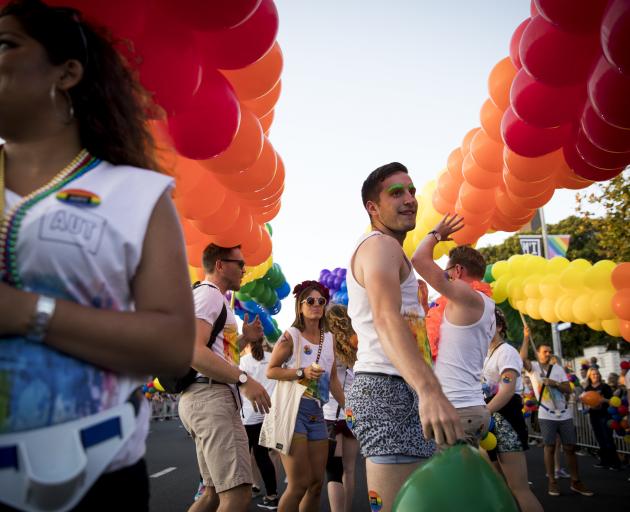 The LGBT community in New Zealand has welcomed Labour’s vow to ban conversion therapy. PHOTO: THE NEW ZEALAND HERALD
I was heartened the other day to hear Labour announce that, if re-elected, it will ban conversion therapy and make it a criminal offence to advertise, offer or perform the awful practice.

I can’t help feeling somewhat amazed, indignant and disheartened, however, that conversion therapy has not been banned already in our country.

In 2018, two petitions were presented to Parliament calling for the banning of the practice. Between them, they had amassed 20,000 signatures. I’d like to believe that if more Kiwis were fully cognisant of the atrocities enacted under the name of this "therapy", they would oppose conversion therapy.

To quote the New Zealand Association of Counsellors, conversion therapy, also known as reparative therapy, is a "pseudoscientific practice or treatment that seeks to change, suppress, and/or eliminate an individual’s sexual orientation, gender identity and, or gender expression, using psychological and/or spiritual interventions".

Conversion therapy is most often practised in private and faith-based institutions in New Zealand.

The Trevor Project has described conversion therapy as "dangerous and discredited practices aimed at changing an individual’s sexual orientation or gender identity".

I still remember the queasiness in my belly upon reading an advertisement in my church newsletter for Exodus Ministries, an interdenominational ex-gay Christian umbrella organisation connecting organisations that sought to "help people who wished to limit their homosexual desires".

I was 14 years old, and was gradually realising that in some undefinable way, I was different from my "boy-crazy" high school friends. The topic of homosexuality was taboo in my household, although on occasion I was subjected to lengthy lectures on the transformative power of conversion therapy by my father.

I learned to keep my mouth shut, and I retreated even further into the dusty closet, cloaking myself in fear and denial. Although I am almost 26 now, I am deeply fearful of returning to New Zealand and having my family and well-meaning Christian friends cajole me into conversion therapy. Exodus International may no longer be in operation, but I have no doubt many member ministries and similar organisations practise in New Zealand.

Those in the LGBT community are in no way broken or in need of repair. To quote the Canadian Psychological Association, "Scientific research does not support the efficacy of conversion or reparative therapy."

Instead of changing one’s sexual orientation or gender identity, conversion therapy is much more likely to provoke guilt and anxiety within the targeted individual. It is deeply unethical, cruel, and can be lethal. Young queer people are especially vulnerable to the ramifications of this therapy, which in many cases leads to depression, anxiety, drug use, homelessness, and suicide.

Every single mainstream medical and mental health organisation, as well as the Human Rights Commission, in New Zealand has rejected the practice of conversion therapy.

However, continuing discrimination, societal bias and the restrictive and conditional love of so-called "Christians" and other religious communities continue to force young LGBT New Zealanders into abuvisve programmes.

Such atrocities commited under the umbrella of conversion therapy worldwide include electroshock therapy, beatings, isolation, confinement, exorcism, forced chemical castration, and talk therapy where one is told that homosexuality is a choice, or the result of an overbearing mother or insufficient male role models early in life.

I’m one of the lucky ones; by keeping silent and "passing" as straight, I was never subjected to this psychological or physical abuse. But it pains me greatly to know that conversion therapy is still practised in New Zealand.

The numbers on LGBT youth who experience anxiety, depression and suicidal ideation as a consquence of discrimination are stark and appalling. According to Youth’12, a major national survey of the health and wellbeing of secondary school students carried out by the University of Auckland in 2012, almost 50% of queer youth had seriously considered taking their own life in the previous year.

New Zealand is often heralded as a progressive rainbow paradise for LGBT people. We have passed landmark laws that allow same-sex couples to get married and adopt children, and discrimination regarding sexual orientation, and gender identity and expression has been banned since 1993.

Opinion polls reglarly find that the large majority of New Zealanders support same-sex marriage and LGBT rights generally. Politicians eagerly whip out their rainbow shirts and march in Pride parades each year. Yet the abusive practice of conversion therapy is still legal within this country.

Those who continue to engage in the violent, abusive, and coercive practice of conversion therapy need to be held accountable for the damage they have caused.

Criminal law may be just one form of punitive measure here; I propose we impose professional disciplinary measures on practitioners of conversion therapy, such as fines and the suspension of professional licences.

Ultimately however, in order to effectively end the atrocities of conversion therapy in New Zealand, we need to ensure that mental health professionals are trained to affirm a beautiful and diverse array of sexual orientations and gender identities. We also need to create and uphold a system for survivors of conversion therapy to report abuse.

Our Government needs to provide meaningful and comprehensive support to survivors of the practice. I agree wholeheartedly with the Greens rainbow spokeswoman, Jan Logie, who wants to see an Office for Rainbow Communities set up. As quoted in a recent article by RNZ, Jan said: "There are offices for basically every significant population group, except the LGBT community. The fact we don’t have one is a result of our history, and of still embedded discrimination."

There is no "praying the gay away". Being LGBT is nothing to be ashamed of. I wish I could somehow tell my 14-year-old self this, to save her from living under a cloud of fear and self-hate.

Conversion therapy does not "work" in any sense of the word; it is instead pyschological and often physical torture for some of the most vulnerable young people. As someone who has lived in fear of being subjected to such "treatment", take it from me. There is no space for conversion therapy in Aotearoa.

'Spiritual interventions' in the islands are stopped by police. Let it be so here.

Conversion Therapy is an attempt to reverse the pshycological effects of the feminist movement with its teachings of masculising females and feminising males. More testoterone in woman and more eostrogen in males.

CT, Aversion Therapy, is psychological conditioning, based on fundamentalist views of social deviance.

In the form of exorcism, CT can kill.

Feminists are not deviant, nor do they covertly rearrange others' biochemistry.