Curran shows she is back in business

Dunedin South MP Clare Curran speaks at a rally outside Hillside Workshops in 2012.PHOTO: GERARD O’BRIEN
Politicians often say they want to know what voters are thinking. While the cynical may have their doubts, generally, that is actually the case.

Partly that is pure job preservation; if you are on the wrong side of a local political issue you may well be found out come election day.

Largely it is because, for many MPs, that is why they stood for election - they genuinely want to help people.

Look back at almost every valedictory speech given by a departing MP and there will be a genuine and heartfelt reference to how much they treasured constituency work.

Dunedin South MP Clare Curran wears her affection for the electorate on her sleeve, and recently on the op-ed page shared with Otago Daily Times readers the results of a recent electorate survey.

This was interesting for many reasons.

For a start, it was a signal to her electorate that after her annus horribilis in 2018, she was up off the mat and back in business.

Secondly, it was a welcome if cautious step back into the media arena, something she has, unsurprisingly, been wary of after the mauling she received in some quarters following her relinquishing her Cabinet portfolios.

Subsequently, she has been higher-profile, especially when talking about Hillside, of which more shortly.

Thirdly, the range of issues that constituents raised is interesting.

Ms Curran herself was a tad surprised the future of KiwiRail's Hillside workshops ranked second.

While it is a big South Dunedin issue, one might think maybe not so much for Waihola or Middlemarch ... the Government's strong support for rail may have struck a chord.

That support has yet to manifest itself in the form of more jobs for Hillside, though, but Ms Curran certainly expects that it will.

Within minutes of Finance Minister Grant Robertson beginning to read the Budget, Ms Curran was signalling the multimillion-dollar investment in rail infrastructure would be relevant to those who hope Hillside may fire up again.

Having campaigned against its closure and argued ever since that it should be reopened, Ms Curran can be expected to continue to be vocal about bringing rail work to South Dunedin.

That feeds quite nicely into her role on the education and workforce select committee. Other issues raised by constituents, such as water quality, climate change and sea level rise fit equally well with Ms Curran's other select committee, environment.

If you will pardon the pun, the Government has a substantial piece of work on water quality in the pipeline, and it is a subject Ms Curran has taken a strong interest in.

One Dunedin-wide issue that did not register on Ms Curran's survey, because of its timing, was the future of Otago Polytechnic.

Staff and students at the institution are still anxiously waiting for Education Minister Chris Hipkins to announce the final details of his planned overhaul of the vocational education system.

There is little doubt that there are issues with the system; several of the country's polytechnics report falling rolls and growing financial difficulties.

However, none of those institutions are in the South, where Otago Polytechnic and Southland Institute of Technology are held up as role models for what polytechnics can achieve.

This week Ms Curran's Dunedin North colleague, David Clark, gave a post-Budget briefing at the Otago Chamber of Commerce at which, no doubt expecting to field questions on the matter, he pre-empted any polytechnic questions as robustly as he could.

Like all Cabinet ministers, Dr Clark is bound by the convention of Cabinet collective responsibility; whether he likes something a colleague has proposed or not, once it becomes Government policy, the Cabinet Manual states he must support it.

With no decision made yet Dr Clark has some wiggle room, but not much; taking a public swipe at a higher-ranked colleague's draft policy is not a sound career move. 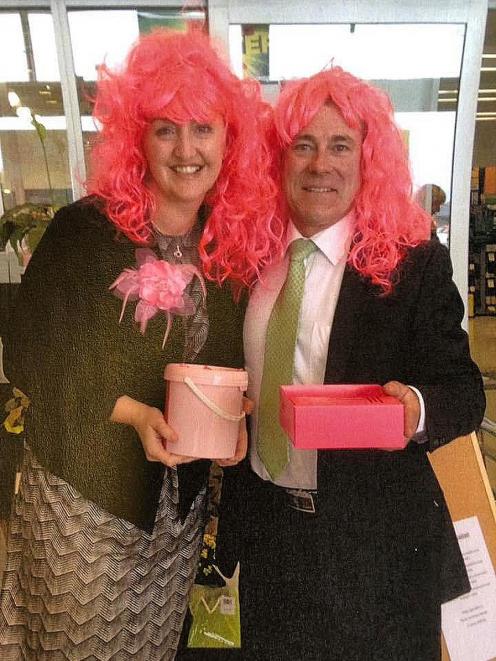 MPs Amy Adams and Michael Woodhouse collecting for charity.PHOTO: SUPPLIED
Hence his strategy of praising Otago Polytechnic to the skies, emphasising he had strongly pushed its case as the local MP, and then kicking for touch on whether Otago and Southern's pleas would be answered.

That was probably about as far as he could go, but Dr Clark did twice emphasise the need for "regional flexibility", a non-specific concept but one that offers a possibility of the local polytechnics retaining their local identity, if not the full autonomy they are seeking.

Dr Clark largely spoke about finance and health matters, as you would expect, but did mention in passing that he hoped to see some developments regarding rail in Dunedin in coming months.

If that were so, it would make Ms Curran and Dr Clark's Dunedin South neighbours very happy indeed.

The brooches, with a design that references the struggle for women's suffrage, are presented to women MPs.

It is, of course, a couple of weeks since Amy Adams stepped down as National's finance spokeswoman.

So, this might not be immediately newsworthy, but it is far too good a photograph not to use ... taken from National Dunedin list MP Michael Woodhouse's tribute to his fellow class of 2008 member.

"We walked into Parliament together and for more than a decade went on a political roller-coaster, me usually in the wake of my amazing friend Amy Adams," Mr Woodhouse said.