Deep sense of loss not helped by rainbow bridges 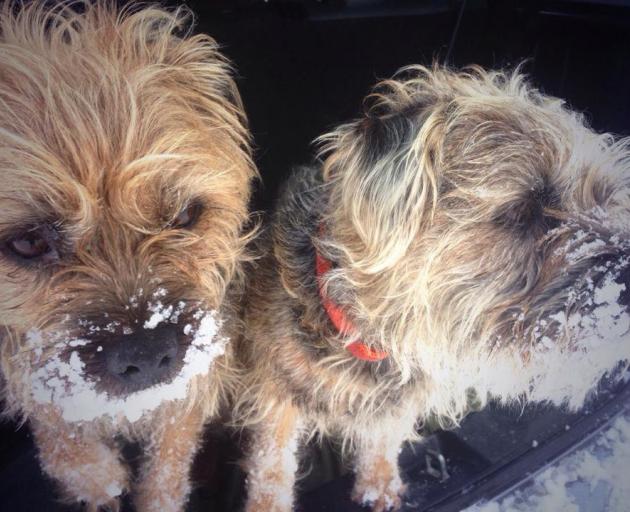 Gulliver and Uma lived on three continents. PHOTOS: SUPPLIED
For Jesse Bering, the death of his beloved border terrier dogs Gulliver and Uma was like losing family members.

For years, Gulliver and Uma, our rambunctious, bright-eyed border terriers, were the centre of our universe.

Their point of origin was County Down in Northern Ireland, where, the locals claim, Saint Patrick is buried (or at least part of him, possibly an ankle bone or an ossified elbow). At the time, we’d just moved from "the States" to Belfast, where I was teaching at the local university. I managed to convince my less enthusiastic partner, Juan, that "Lisbane Lad" and "Cloughey Lass," Gulliver and Uma’s official registered kennel club names, were just what we needed.

I’d never had terriers before, only retrievers and spaniels of mottled ilk. All were lovely.

But soon I became a breed loyalist, won over by the border’s uncanny human-like nature and its up-for-anything sense of adventure. My memory of the past 12 years, hazy in parts but with blistering preciseness in others, is brimming over with fragments of our exploits.

In my mind’s eye, I see cheeky little Gulliver bouncing along the dingy footpaths of Belfast, peeling chewing gum from the pavement stealthily as he goes; Uma romping through the tall weeds at my father’s farm in Ohio as the horses sigh their discontent; a middle-aged Gulliver seated imperially, windblown, on a big rock, absorbing the salty sea air; the two of them in perfect unison on a trail in the winter woods in upstate New York, frozen white snow melded to their brown muzzles; Uma rolling in the warm sand of a desolate New Zealand beach.

And tennis balls. To say that they "liked" chasing tennis balls would be like saying that a vampire "likes" blood or that an addict "likes" heroin. They needed tennis balls. Uma, especially, was an eager advocate of the furry yellow hunt.

True to Gulliver’s name, their journeys took them to three continents. They were victims, and content ones, of my wayward academic career. Together with our cat, Tommy, the five of us were a real family unit. If you know the subject of my last book, it’s not a stretch to say that they saved my life. (At my lowest, Juan would sometimes warn me — I think sardonically but one can never be sure with him — that I’d better not, because the animals would end up in a shelter. And I couldn’t have that.)

When Gulliver died in surgery last February from a gallbladder mucocele, a pernicious and fast-acting disease that turns bile into agglutinated muck and wreaks havoc — and one that, sadly, the breed is genetically predisposed to developing — we were devastated. So was Uma. In fact, looking back, I don’t think she ever really got over losing Gulliver. 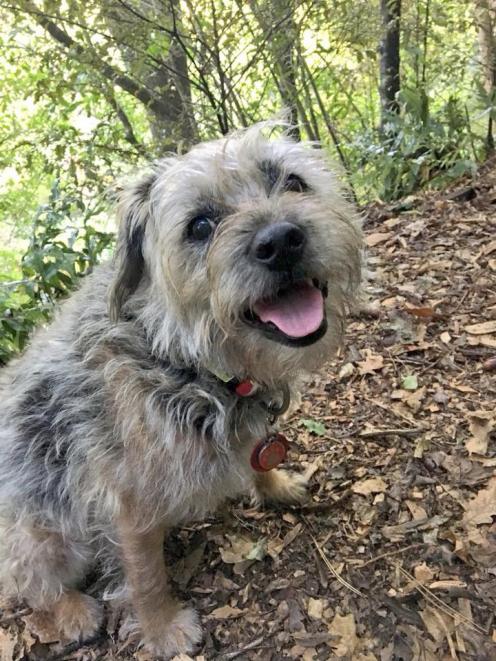 Uma loved tennis balls.
She became forlorn and slower in her gait. It aged her.

We welcomed a new border terrier puppy into the home, an inquisitive, playful fellow named Hanno, hoping that he would lift Uma’s spirits. They had their moments, but mostly, "grandma Uma," as we started calling her, just wanted to be left alone.

Uma died two Sundays ago. Like Gulliver, she had a gallbladder mucocele. I knew the symptoms this time: sudden loss of appetite, vomiting, and an overall flat affect. After confirming the worst with my local vet, I drove Uma to the nearest specialist to perform the surgery.

Listless on a cushion in the passenger side foot well, as a drip IV with pain relief dangled from the closed window, Uma, no longer bright-eyed, stared up at me. I cried the entire five-hour drive from Dunedin to Rangiora, telling her between sobs how much I loved her and still needed her.

Unlike Gulliver, she survived the operation. "It went beautifully," the surgeon told me. I allowed myself, briefly, the joy of statistically informed hope. But things went downhill overnight, and Uma suffered a fatal blood clot the next morning. "She fought hard," the vet told me.

As one does these days, I shared my grief on Facebook, including on some border terrier aficionado pages. I don’t know what I was expecting. Perhaps I was hoping, implicitly, that the world would finally take notice of this little old dog, grey and lumpy with lipomas, quarrelsome towards other dogs but endlessly doe-eyed for me and Juan, who for a dozen years had slept every night on the pillow between our heads. "Uma has died!" I wanted to claw with my heart into those insipid online posts. "She was the secret of life. How is the world not unraveling at its very seams?"

In return, I received the predictable condolences for my loss. Most, echoing my despair from their own tragic pet losses, helped to ease the pain, as only such commiserations can.

But then there were the many emblazoned with tacky rainbow bridges, of throwaway comments about Uma now "running free," of promises that I’d see her again one day. One woman assured me that God was ushering Uma into Heaven now, with Jesus in the guise of another dog offering a paw to greet her.

I appreciate the spirit in which these sentiments are made, and I have no malice for anyone with pure intentions, saccharine or not. Still, they ring hollow, and to an extent they even degrade the complexity of Uma’s existence.

Frankly, they just don’t help, and I wish that people wouldn’t foist such simple-minded memes on us nonbelievers when all we want, really, is for others to briefly recognise that a great burning light, bright and variegated as love itself, has gone out in our lives.

Uma was not a one-dimensional cartoon character, now frolicking in a meadow on the other side of a rainbow.

And God? On an old Judge Judy episode, there was a case in which two women were claiming ownership of a beloved dog. Judge Judy asked the bailiff to take the dog and release it into the courtroom, adjudicating ownership on the basis of which of the women the dog trotted off to.

Let’s just say that if it came down to me and God, and you set Uma free to see who she’d choose, you’d be a fool to put money on the latter. That’s how much she loved me. And that’s why the death of a dog hurts so much: their love for you is a mortal one, yet it’s so powerful that it eclipses anything divine.

I’m haunted by the memory of the last time I saw Uma. Despite her obvious discomfort, she locked eyes with me as I left the room for the vet to prepare her for surgery. Her gaze lingers. The next time I saw her, she was swaddled in a blanket, deceased. My sweet Cloughey Lass. I kissed her small head as I’d done a million times before. Inside of it, an entire cosmos had just disappeared with one cruel stroke.

I suffer no illusions that Gulliver and Uma are anything other than gone now. They are extinct in their individuality, just as I will be one day, and you too. In fact, I think that when it comes to dogs, their sacredness is their fleetingness. So be terribly kind to them, because despite our most irrational beliefs, our earthly relationships with our dogs is the closest that both of us animals will probably ever get to heaven.

- Jesse Bering is the director of the Centre for Science Communication at the University of Otago, New Zealand and the author of four books, including Suicidal: Why We Kill Ourselves (University of Chicago Press, 2018).

Twice now I've lost one of my cats. This article really says it well. There were 3 types of replies to my posts; those who shared their own losses, those who shared beliefs that they expected I would follow (rainbow bridge etc), and - fortunately rare - those who considered the cat part of my family as mere animals.

Our cats, dogs, rats, guinea pigs, horses, etc are part of our family and have a closeness of children for most of us. This is more of the case for those that are unable to have human children of their own. When are furred children pass away the pain and loss is as real as losing any other family member.