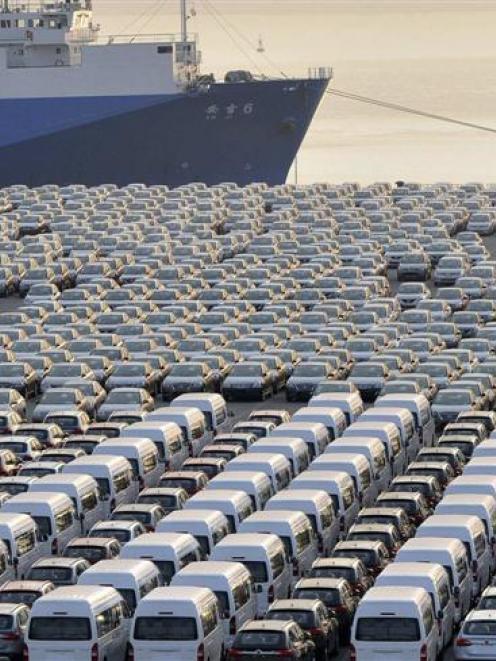 Chinese cars wait to be exported at a port in Dalian, Liaoning province. Photo by Reuters.
You know the storyline by now. There are one million US-dollar millionaires in China (''To get rich is glorious,'' said former leader Deng Xiao-ping). Seventy percent of the homes in China are bought for cash. China's total trade - the sum of imports and exports - is now bigger than that of the United States.

''They're going to eat our lunch,'' whimper the faint-hearted in the West.

It's not just the Chinese who are coming. The Indians and the Brazilians are coming too, with economic growth rates far higher than in the old industrialised countries, but it doesn't even stop there. There's also Mexico, Turkey, Indonesia and half a dozen other big countries in what used to be called the Third World that have discovered the secret of high-speed growth. The power shift is happening even faster than the pundits predicted.

As recently as 2009, the ''Brics'' (Brazil, Russia, India and China) accounted for less than one-tenth of total global consumption. The European Union consumed twice as much, and so did the United States. But by 2020, the Brics will be producing and consuming just as much as either of the older economic zones, and by 2025 considerably more than either of them.

In fact, if you include not just the four Brics but all the other fast-growing economies of the ex-Third World, in just a dozen years' time they will account for about 40% of world consumption. As a rule, with wealth comes power, so they will increasingly be calling the tune that the West must dance to. Or at least that is the doomsday scenario that haunts the strategists and economists of the West. It's nonsense, for at least three reasons.

First of all, a shift in the world's centre of economic gravity does not necessarily spell doom for those whose relative influence has dwindled. The last time the centre shifted, when the United States overtook the nations of Europe in the late 19th and early 20th centuries, it did not dent Europe's prosperity at all.

Secondly, the new centre of gravity this time, while mostly located in Asia, is not a single country with a coherent foreign policy like the United States. The four Brics will never become a strategic or economic bloc. They are more likely to split into rival blocs, although one hopes not. And the Mexicos and Turkeys and Indonesias of this new world will have their own fish to fry.

So it will be a more complicated world with many major players, and the centre of economic gravity will be in Asia, but there's nothing particularly strange about this. More than half of the human race lives in Asia, so where else should the centre of gravity be? Asia is very far from monolithic, and there is no logical reason to suppose that its economic rise spells economic decline for the West.

Thirdly, descriptions of the future that are simply extrapolations of the present, like the ones at the start of this article, are almost always wrong. If the widely believed forecasts of the 1980s had been right, Japan would now bestride the world like an economic colossus. The one certain thing about the future is surprises - but some surprises are a little less surprising than others.

Take climate change, for example. The scientific evidence strongly suggests that the tropical and subtropical parts of the world, home to almost all of the emerging economic powers, will be much harder hit by global warming than the temperate parts of the globe further away from the equator, where the older industrialised countries are.

The centre of gravity of the world economy is undoubtedly leaving the old ''Atlantic'' world of Europe and North America and moving towards Asia, but how far and how fast this process goes remains to be seen. And there is no reason to believe that it will leave the countries of the West poor or helpless.

True, economists in the West often ask the question: ''What will we sell the emerging countries in the future that they cannot produce for themselves?'' In the runaway global warming scenario, the answer would be ''food'', but the real answer is sure to be more complex than that. Never mind. They'll think of something, because they'll have to.