Dunedin has run out of puff to build wind farms 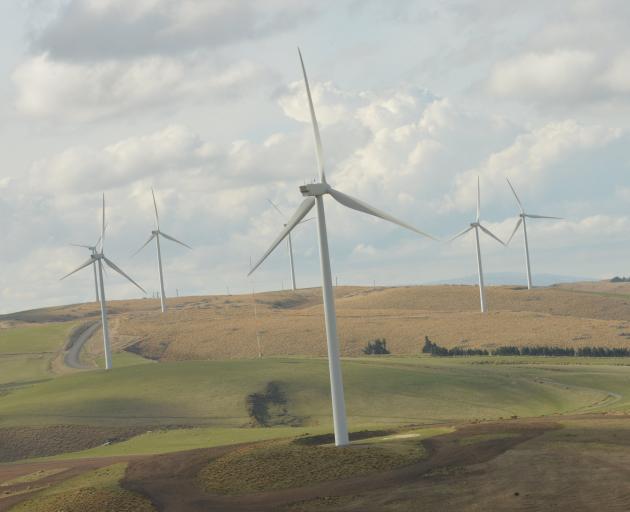 The Mahinerangi wind farm, in the Clutha district, is the only significant wind power generation near Dunedin. Photo: Stephen Jaquiery
DougalMcQueen laments the lack of wind farms near Dunedin.

In 1997, as an excited student in the inaugural year of the energy management programme at the University of Otago, I went to see then mayor Sukhi Turner. She heard my plan to follow Wellington and demonstrate a wind turbine.

My suggested location next to the radio masts at Highcliff was rejected outright. Her call was probably right, but I don't think radio interference was her reason.

Soon afterwards, I obtained wind data from Hodson Hill and saw that turbulence intensity in the wake of Mihiwaka would rule that out as a good spot.

Shortly after that I went on OE to the United Kingdom, pursuing a career in wind-power engineering, learning of the complexities in developing wind farm projects where wind resources are key but projects are shaped by criteria such as wind flow, noise, visual amenity, radio interference and district plans.

On returning to New Zealand, I was fortunate to work for Meridian Energy where, among other tasks, I put the dots on the map for Project Hayes in Central Otago.

Project Hayes caused more than a little controversy and I had exhaustive philosophical discussions with the likes of Peter Entwisle, of Dunedin.

Some of Meridian Energy's decisions were deliberate, such as siting the project just over the city boundary in Central Otago, out of the outstanding landscape.

But these did little to cool the Upland Landscape Protection Society.

The ultimate test, however, was the national judgement the project was too big. In my opinion, if Project Hayes had been in Dunedin, the better wind resources would mean achieving its economies of scale wouldn't have been necessary. Like the Mahinerangi wind farm, which is in the Clutha district, a smaller version might today exist next to the 220kV transmission lines.

Escalation of wind farm projects to the magnitude of national significance has not meant Dunedin has been accepting of the smallest and most community-focused projects. Blueskin Energy Trust's application for a three-turbine project on Porteous Hill north of Evansdale was rejected as the concerns of nearby residents were ruled to outweigh the benefits to the wider community.

This ruling has national implications as it sets a precedent for future resource consents. To my knowledge, no wind turbines have been consented since, and that is at a time when wind power is needed in Aotearoa.

This story does not mirror the values I grew up with in Dunedin. I think my uncle got it right ''through Black Windows we can't see nuclear bombs or aluminium smelters'' but peculiarly through clean windows we don't see wind turbines, either.