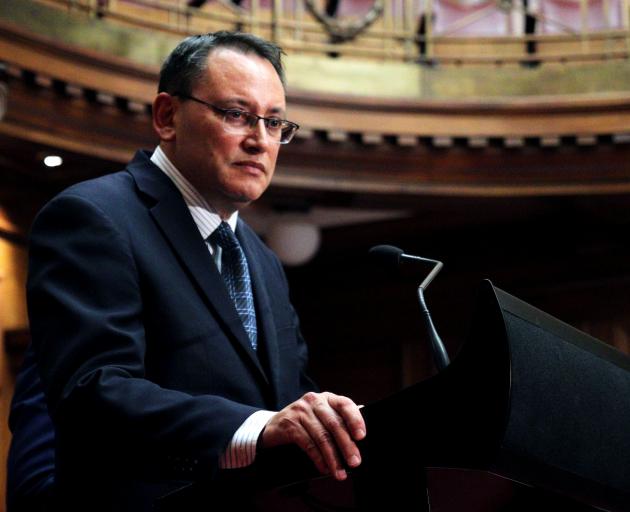 Dr Shane Reti at yesterday's post-caucus press-conference. Photo: Getty Images
If there was an award for Biggest Understatement of the Year, Dr Shane Reti’s name would already be engraved on the trophy.

As he stood behind the podium at the Beehive and said, "This is not our best day", National’s latest leader was like a deer in the headlights.

In the preceding 12 hours, his party had once again spectacularly imploded, the caucus airing its dirty laundry as the Judith Collins v Simon Bridges factions went to war.

It all began late on Wednesday night, when leader Judith Collins dropped a bombshell via press release. She was demoting former leader and senior MP Bridges and stripping him of his portfolios after learning of a complaint about alleged comments he made to a female MP at a function five years ago.

It quickly emerged the complaint was made by Waitaki MP Jacqui Dean.

By yesterday afternoon, Ms Collins had been rolled as leader, Dr Reti had replaced her in an acting capacity until the caucus meets again on Tuesday, Mrs Dean had asked for privacy, and Mr Bridges mulled a leadership bid.

It was a roller-coaster ride that we could not get off even when we desperately wanted to.

While the drama kept political junkies glued to their screens, underneath the bluster and backstabbing lies a much bigger problem.

This week should have been a good one for National. The Government has come under increasing pressure over its imminent Traffic Light System and border changes, both of which were opportunities for National to score some hits and, more importantly, hold the Government to account.

But where was the Opposition? Holed up in a caucus meeting fighting among themselves and drowning in negative publicity.

It is nothing we have not seen before.

Who can forget the chaotic lead-up to the 2020 election, when candidates dropped like scandal-plagued flies and misstep after misstep drew attention away from debating important issues?

Who can forget Ms Collins snubbing cheese rolls at a Mosgiel cafe, the bizarre church photo opportunity, or the now infamous staged meet and greet in Ponsonby?

It would be amusing, if we were not living in the middle of a deadly global pandemic.

Decisions made in Wellington now arguably have more of an impact on our daily lives than they ever have before.

We should, therefore, expect robust scrutiny from our elected officials, holding the Government to account and helping to shape the best possible legislation on our collective behalf.

Even those on the left are crying out for a decent, functioning Opposition.

And yet, here we are.

The optics of a party focused solely on itself and not, as Ms Collins often says, the things that matter to New Zealanders, will not play well with a weary public.

The Government has been nowhere near its best, but its poll numbers remain relatively solid in the face of few viable alternatives.

Dr Reti tried valiantly to get the train back on the tracks, saying MPs would rebuild and focus on the issues.

But with a bitter leadership contest still to play out, that is unlikely to take precedence any time soon.

And the people of the Waitaki district may still have some lingering questions about their long-serving MP’s role in this mess, and its timing.

Only time will tell as to how tenable her position is.

The only person who will really benefit from the whole sorry saga is Act Party leader David Seymour, who increasingly is appearing as the de facto leader of the Opposition.

Meanwhile, as National floundered, the Government passed the traffic light system legislation under urgency, Auckland reached the unhappy milestone of 100 days in lockdown, and New Zealand had its 41st Covid-19 death.

All issues much more deserving of our MPs’ time, energy and focus.

Once again the ODT nails it. In a time of crisis, such as that caused by the current pandemic, all political parties should be pulling together. There was a brief window of opportunity for national, under Simon bridges leadership, where they could have come on board with the govt and truly worked with them to overcome some of the inertia that was faced at the beginning when everyone was struggling with the enormity of the task. But no, bridges squandered this opportunity and lost the leadership to collins and it has all been downhill for national since then.
Honestly, they should stick with Reti as their leader, he appears to be the only voice of sanity left in the ranks of national’s leadership offerings. It the national party caucus is capable of containing its ego for a moment they might just see it.

The Nats have made so many 101 errors you have to wonder what or who is behind them. They try to tell you that their business acumen stands them in good shape to lead the economy and covid. All I can say is thank god they are not near the books or the syringes. Who can forget them running our health system down.
But the basics of what they stand for has past. No one accepts doing things for the rich and privileged anymore. They don't even have farmers in their ranks now.
They have been too oppositional - both Bridges & Collins - chasing every car going down the road.
All I can say is it must be hard on our right wing media.