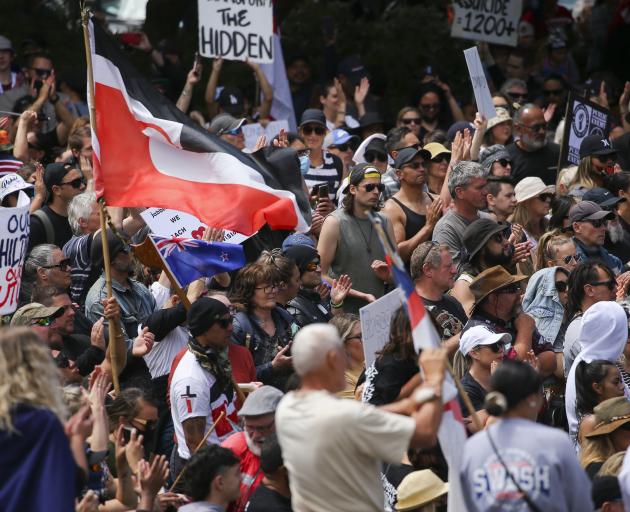 The toxic underbelly should have revolted not just most New Zealanders but also many of the protesters themselves.

Vile viruses are spreading. What a shame we cannot vaccinate against them.

The threats against the politicians we elect were appalling. The media meanwhile are terrorists and evil and the judiciary corrupt.

Wisely, no politicians came out to meet the crowd.

Jacinda Ardern is correct to say the protesters do not represent the “vast bulk” of New Zealanders. Associate Health Minister Ayesha Verrall also made the point far more Kiwis quietly went ahead and were vaccinated on the same day as the march.

Nonetheless, the University of Auckland’s Disinformation Project released a report, also on Tuesday, saying disinformation had escalated since the Auckland lockdown.

Posts and engagement were widening and deepening every week. There appeared to be a high degree of co-ordination and collaboration among online platforms in spreading disinformation or deliberately creating false information.

Messaging app Telegram had been becoming a primary vehicle. The tone was increasingly vaccine-resistant rather than just hesitant. Some of the content was violent, far-right and aligned with QAnon conspiracies.

Protesters came from a hodgepodge of positions, exemplified by the incongruity of Maori nationalism and Trump flags flying at the same event.

Many in Wellington and the other protests are genuinely concerned — even if misguided — about vaccine safety or individual rights.

There are legitimate discussions to be had on the appropriateness of job vaccination mandates, even if most New Zealanders sensibly support them to save lives and prevent hospitals from being overrun.

There is a place, too, for questioning Government policy, the establishment, media, big pharma et al.

But, as Clutha Mayor Bryan Cadogan said yesterday after the Balclutha protest: “There are times when society’s greater need outweighs personal choice, and we have a critical responsibility as a nation moving forward to protect the vulnerable.”

Freedoms and Rights, as the umbrella group describes itself, come with responsibilities to others.

It is concerning, as well, when those declining to be vaccinated include a core of teachers and midwives. Should they be helping give birth to or teaching our children if they cannot believe in the overwhelming conclusions of science and medicine?

The disparate protesters demand the Government by 2pm tomorrow revoke workplace vaccination mandates by next Monday, move all New Zealand into Level 1 and remove the Auckland border.

What a disaster that would be.

Otherwise, the protest leaders say, “the great gridlock” will jam main centres until the Government gives in. Destiny Church's Brian Tamaki will then lead negotiations with the police and the Government.

To believe that would happen illustrates again the deluding effects of social media echo chambers.

It was echo chambers, some parallel viral views and delusions that helped foster the evil Christchurch-mosque murderer’s attitudes and actions.

New Zealand complacency and innocence took another hit on Tuesday, despite attempts to brush off the worst of gathering as a tiny minority.

The protest was largely peaceful, and many there were New Zealanders of goodwill. Latent violence and extremist attitudes, however, were present in sufficient force to act as another warning.