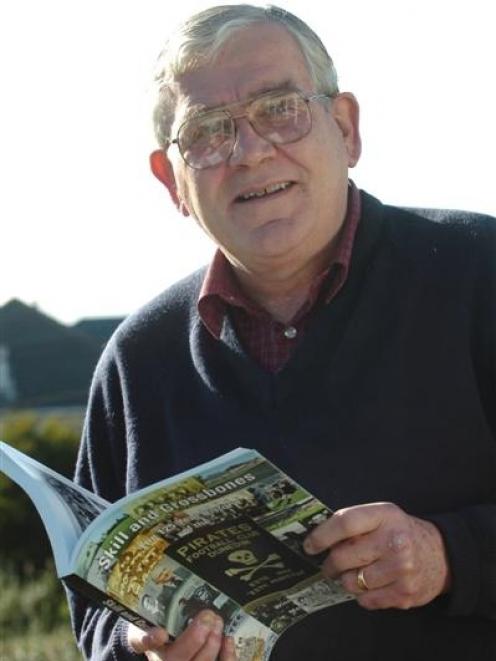 Winston Cooper holds a copy of his book 'Skill and Crossbones: The 125-Year History of the Pirates Football Club'. Photo by Peter McIntosh.
Christmas holiday reading is usually the lighter stuff, but not long after the new Minister of Research, Science and Technology, Pete Hodgson, was appointed last year, he disclosed that he had asked "clever people" to provide him with reading material relevant to his portfolios for his holiday break.

He may still be reading it, for all we know, but the Government has no greater enthusiast for improving the links between private enterprise and science, or for advancing New Zealand's economic fortunes through the medium of innovation.

Seven years ago he tried to get the tax rules dealing with research and development eased to encourage greater private sector involvement, but did not succeed.

The rules have now been changed, and he sees his job to build on this to get growth in the sector far higher than forecasts.

Mr Hodgson has a fellow enthusiast in the British scientist Professor Lord Robert Winston, whose suggestion at the weekend that New Zealand would have to relinquish its dependence on agriculture and switch to science if it wanted a high-income economy, is the kind of talk this country needs to hear a great deal more of in the next few years.

Our scientists have been saying similar things for a while, but the politicians have rarely been listening.

Rather, they have tended to starve pure science of research and development funds, pick "winners" from research projects instead of adopting the long-term view, and provide funds for agriculture-related projects rather than take in the broad span of research.

Lord Winston reminded his audience of the embarrassing fact that we spend much less on research than many other OECD countries.

Lord Winston appreciated that agricultural science has driven the economy for much of the country's developed history, but perhaps was less aware that today the entire economy - primary production, tourism and high technology sectors - is science-based.

The success of the agriculture sector on world markets would not have occurred were it not for the many remarkable achievements of scientists over many years, but perhaps the chief point he was trying to make was that science and technology is not yet a highly visible part of our national culture, and it should be.

Mr Hodgson has long called for the acknowledgement of the role of research in our society, but this will not happen until the wider public realises how important science has been and continues to be in our lives.

Today and tomorrow this will be in the fields of climate change, sustainability, water, energy, and food resources, housing and health, even transport.

Lord Winston, unsurprisingly given his own special interest, emphasised the need for a greater investment in human health research, citing the prospect of improving the lives of people around the world, with a potential financial windfall for this country.

In a small economy, he argued, science could be very profitable, far more so than low-value products such as meat and wood.

To which we would add that New Zealand cannot have a science-based, high-value economy unless there is a notable improvement in literacy and numeracy skills.

Nor - to be entirely self-interested - can Dunedin.

The future of the city will undoubtedly depend on marrying the brains in both private enterprise and the tertiary institutions to adequate venture capital.

The presence of one of the world's most successful research universities, together with several Crown research institutes, supports Mr Hodgson's contention that Dunedin is the most research intensive city in New Zealand or Australia, with one person in 200 involved in full-time research.

In effect, Lord Winston's point was that what Dunedin has already become, New Zealand must; and that the need in Dunedin for the commercialisation of private and public research to secure its future is the identical challenge facing the nation.

In additional comments, he draws attention to perhaps our greatest immediate challenge: "You are exporting the wrong things, you're exporting your talent, the very talent which might prop up your economy.

"But there's no future for them in this country."

He was referring to scientific expertise in the context of criticism of the pre-eminence many New Zealanders place on sport.

While we should always be cautious about giving too much credence to the expert voice from afar, Lord Winston's comments should nevertheless sharpen local attention - in an election year - on how we should shape the nation's future.

Manifestly, it will not be just a matter of tax cuts.