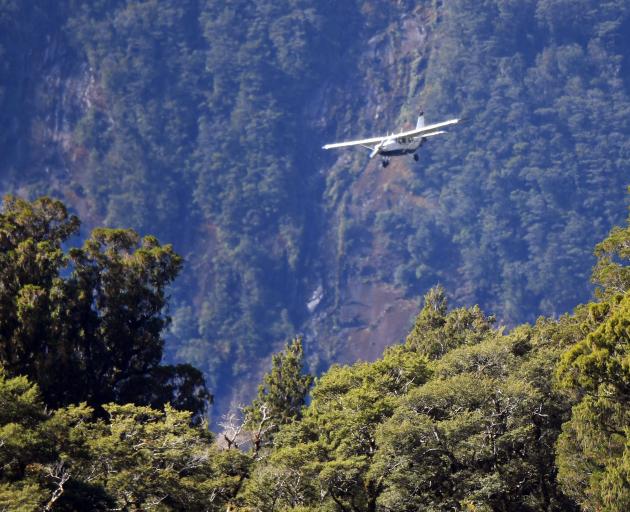 An aircraft arrives at Milford Sound. PHOTO: STEPHEN JAQUIERY
The boat has certainly been pushed out for Milford Sound’s master plan.

The Milford Opportunities Project has produced bold plans to combat overcrowding in this “jewel” in the New Zealand tourism crown.

Opposition to two of the more radical proposals — banning cruise ships and removing the aerodrome runway — has arisen quickly.

Although restricting flight numbers always seemed an option, doing away with fixed-wing planes was not widely expected.

The huge challenge now will be implementation. It is one thing to put the plan together. It is another to battle through the obstacles to make it happen.

The Government and tourism minister Stuart Nash seem to be onboard at this stage.

At least, just about everyone seems to agree about the problem. The pocket of flat land at Milford Sound itself is tiny. The experience of wonder and beauty was being tarnished, especially when the fleets of buses from Queenstown would arrive for a few hours in the middle of the day.

It was not just going to rain visitors; a torrent was expected — as heavy as the famed Fiordland downpours.

A certain virus has capsized predictions. There must be questions, particularly in a rapidly warming world, whether mass transglobal tourism will ever return to previous trajectories.

The comeback of the cruise ships in large numbers is even more problematic.

Nevertheless, neither should be discounted. For better and for worse, it can take even more than extraordinary events to solidify long-term change.

Each significant part of the plan will be pulled apart.

Cruise ship businesses and related tourism operators, for example, will argue — with some validity — that the ships arrive overnight, passengers wake to the grandeur and they are gone when most of the cars and buses start arriving. They see themselves as easy targets.

Milford Sound and Fiordland is the highlight for many passengers. Without Milford Sound, the flow on to Dunedin and other centres might not occur.

Businesses running flights from Queenstown, Glenorchy, Te Anau and Wanaka predict decimation, and reactions have been angry. Milford Sound, in some instances, made up more than 90% of their revenue.

The buzz in the air across to and around Milford Sound can be near constant at peak times in fine weather.

The vast majority of visitors, however, arrive by the glorious road. From Te Anau Downs onwards the trip must be one of the most spectacular on earth as it heads up the Eglington River before carving through the Darren Mountains.

Charging overseas visitors — but not New Zealanders — creates practical issues. But this is what happens in some places overseas. Australia’s national parks have varying charges from state to state. Perhaps further costs might be a road too far for the already expensive New Zealand experience. Perhaps, though, what is charged for garners an added attraction through being more exclusive.

Te Anau, very often the overlooked and underprivileged Queenstown cousin, would become the gateway. Even New Zealanders would need permits to drive to Milford.

The project has been driven from Southland as part of the Southland Regional Development Strategy.

But where in this does the Fiordland National Park Management Plan and its processes fit in? The area is not only a national park but also a Unesco World Heritage site.

The innovative and challenging plan is in some ways the easier part, despite its 1600 pages of analysis.

There is likely to be plenty of disagreement and debate ahead before implementation of much of the plan can take place.

Hard decisions will have to be made.