The comfort of the Covid conference 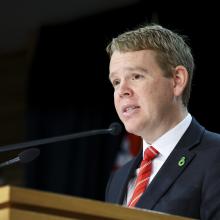 Minister for Covid-19 Response Chris Hipkins. PHOTO: GETTY IMAGES
In this topsy-turvy world, we all look for something constant to hold on to, something which seems to sail imperviously through the sea of strife, some normality in the face of chaos.

Rudyard Kipling nailed it in the first two lines of his poem If when he wrote: “If you can keep your head when all about you are losing theirs . . . ”.

This is a time for considered behaviour, for careful thinking, for choosing your news sources wisely, and for avoiding social media if what is being said is likely to irritate or upset you.

As New Zealand grapples with the growing number of people testing positive to the Delta variant of Covid-19, it is hard to believe that just a week ago there were less than a handful of confirmed cases and as of yesterday there were 148.

This rising and accelerating trend shows, if proof were ever needed, how transmissable this dangerous variant is and how we all need to take our precautions seriously and get our vaccinations as soon as possible.

That this outbreak has happened should come as no surprise. For many months, the Delta variant has been arriving here with returning residents and been swiftly dealt with, courtesy of managed quarantine.

It has felt like New Zealand has been surrounded by Delta, pressing in from all sides, looking for a tiny gap to get through. And, of course, it found one.

By then, the trend of the outbreak should be much clearer to all, including to the epidemiologists and modelling experts who can advise on the next steps.

Critically, we will have a better idea of the spread of positive cases and whether any of those people are in the South Island. So far, it has been just good luck there have been none, considering the hundreds of South Islanders who have been at locations of interest across the North Island.

The Government’s communications around the outbreak and this lockdown, and last year’s lockdowns, have appeared rather slick and generally well-organised. In fact, it could be said they have been carefully stage-managed.

Several weeks ago, there seemed to be a subtle change in messaging from the Government.

Until that point, there had been little overt mention of how the nation would cope with a community outbreak of the Delta variant. Then, seemingly over the space of a few days, it started being dropped into the conversation that, should there be a case in the community, a Level 4 lockdown was the likely response.

It was preparing for the inevitable.

The televised and livestreamed media conferences from the Beehive each afternoon offer viewers drama and pathos, vital information and even moments of comedy.

Who will ever forget the raised eyebrows and grin of director-general of health Dr Ashley Bloomfield at Covid Recovery Minister Chris Hipkins’ comment about the difficulty for people living in high-density areas to “get outside and spread their legs”.

There are exercise challenges, and apparently drinking games, every time certain phrases are uttered, such as the “team of five million”.

Who doesn’t try to pick up clues about what is about to be said from the face of Prime Minister Jacinda Ardern or proxy as they enter the theatrette? And who isn’t in awe at the incredible efforts of the team of sign-language interpreters as they keep up with the words, numbers and complex scientific jargon.

Most importantly, the regular conferences offer something consistent for those on their own at home, give shape to what may otherwise be empty days, and offer much-needed companionship and a vital sense of inclusion.

Bravo!
Exactly the editorial we need at this pivotal moment. Kudos to ODT.