Do it once, do it right 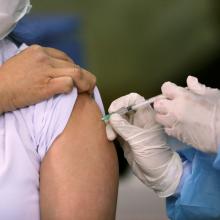 A Pfizer-BioNTech Covid-19 vaccine is administered as part of the global vaccine rollout. Photo: Reuters
Plans revealed so far for New Zealand’s Covid-19 vaccination rollout may still require some tweaking, although generally they have been well received.

The timetable outlined this week divided those eligible for the vaccine, those 16 and over, into four groups.

There should be no argument about those working at the border and in the quarantine facilities and their families and household contacts being first in the queue.

We imagine they are breathing a collective sigh of relief. These people are among those who have done the hard yards in terms of risk of exposure to the disease and the stress on them and their families over almost a year must have been immense.

Vaccinations have begun for some 57,000 frontline health workers, away from the border, who risk exposure to Covid-19 while providing care and a further 183,000 healthcare and other workers in a variety of settings where they could expose vulnerable people to the coronavirus.

It has been sensible to see that by the end of this month the programme will extend to vaccinating of those in South Auckland who are over 65 or have underlying health issues.

Those in the rest of the country considered at high risk if they catch the disease will begin getting vaccinated in May, while the general population should expect their vaccinations to begin from July.

It is not surprising there have been calls for all in the Counties Manukau District Health Board area to be vaccinated before the rest of the country because of their exposure to the border, and even for the whole of Auckland to be ahead of the general population rollout.

These sections of the population have borne the brunt of lockdowns more than the rest of us and understandably feel vulnerable.

Not putting such a large section of the population ahead of other parts of the population may be partly a logistical issue. Much will depend on how much of the vaccine is available at any time. With the plan as it stands, the Government is not expecting it will have to pause the rollout.

It will be interesting to see if there is any reaction to requests for workers in supermarkets near managed isolation facilities, and bus drivers to be higher priority.

The decision to run with one vaccine is one we support. Offering some one-dose and some two-dose vaccines sounded like a recipe for a logistical nightmare, in terms of ensuring the right people got the right vaccination at the right time.

The two-dose Pfizer/BioNTech vaccine has had a good track record thus far, although it requires super-cold storage and can spoil once thawed if it is not used quickly enough.

Those clamouring for the Government to move faster on the wider rollout should be careful what they wish for. Every part of a major undertaking such as this needs to be meticulously planned.

As National MP Chris Bishop pointed out at the Health Select Committee this week when questioning Director-general of health Dr Ashley Bloomfield about progress on the information technology for the rollout, government IT projects tend to be expensive and often fail and "we can’t get this wrong".

Dr Bloomfield explained the IT involves integrating four systems which are being built from scratch — the Covid Immunisation Register (CIR), a separate booking system, a recall system to ensure people get called back for their second dose, and an inventory management system which will track the vaccine.

The CIR is operational, but it seems there is still considerable work to be done on the other parts of the system before the large-scale rollout.

"Do it once, do it right" should be the mantra here. If it takes some extra time to achieve a relatively glitch-free programme which is easy to access and well understood and accepted by most of the population, then so be it.