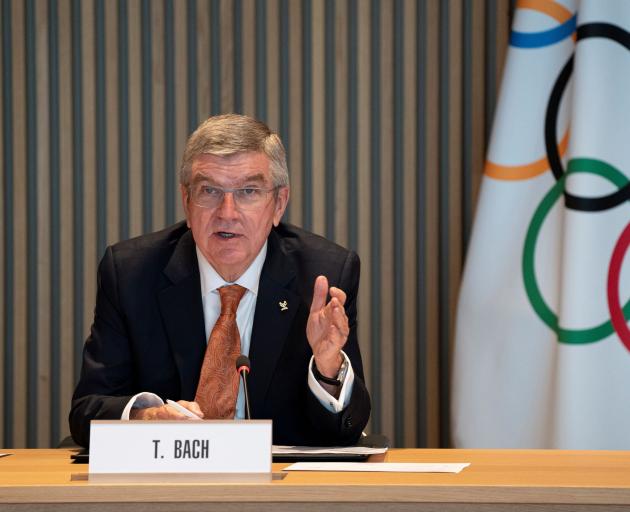 International Olympic Committee president Thomas Bach seems determined the Tokyo Games will proceed. PHOTO: REUTERS
It is understandable that some fans of the Olympic Games — perhaps, especially, those who still believe in the event’s Corinthian ideals and have not been left jaded by its long descent into crass commercialism — are desperate to see the flame lit in Tokyo in July.

They want to see the athletes performing; they want another escape from the difficulties and frustrations of a world in pandemic; they can’t understand why Super Bowls and cricket tests and FA Cup finals can be held, with or without fans in attendance, yet there is doubt over the quadrennial gathering of mixed sports.

But it is equally understandable that many people — a large majority, we suspect — are left utterly cold at the prospect of a major global event taking place while Covid-19 is still winning the war.

They do not understand why such a mass gathering remains on the cards when there are far more important matters to be dealt with, and they question the motivation (hint: it is about money) behind the International Olympic Committee’s insistence on ploughing ahead, after initially delaying the Games by a year.

It seems fair to say the Olympics are looking on the shaky side.

At the weekend, rumours were flying that host nation Japan was planning to say "Games over". In fact, The Times claimed a source within the country’s coalition Government was reporting the decision had already been made to cancel the Olympics.

Japan has had a surge in Covid-19 cases since late November. The Japan Times has reported thousands of patients being denied entry to hospitals due to capacity, and Prime Minister Yoshihide Suga has been under intense pressure due to his handling of the response.

No wonder, then, the mood of the Japanese public appears to be hardening towards the Olympics, one poll suggesting 80% of people did not want the Games to go ahead.

A certain level of antipathy is nothing new — all host countries find there are plenty of naysayers who see little value in spending obscene amounts of money on the Games — but when an overwhelming majority want the Games to be gone, there might be a problem.

As you would expect, the IOC remains bullish. It has the final say on any rescheduling, and it seems extremely reluctant to even consider the prospect of punting the Olympics another year (or more).

"No plan B," was the gruff response from IOC president Thomas Bach when pressed on whether the Olympics might be canned.

"The public don’t understand it can’t be postponed again," came the follow-up from IOC vice-president John Coates on Australian radio, referencing the clash the Games would have with the Winter Olympics if they were postponed to 2022.

There is a lot at stake here. And, funnily enough, it’s not the welfare of the athletes or the appeal of the sporting action that is debate topic No 1.

The Olympics have been commercialised to such an extent that the first point of discussion is now always going to be the dollar signs. Japan has reportedly spent $25billion of mostly public money on preparing to host the event; the American TV rights alone run into the billions.

But at some point, the money can only take you so far. Is it worth putting on the Olympics if nobody really wants to be there?

There is merit to the idea of taking this cycle completely off. Come back in 2024 with an event that is more about sport, less about sponsorship.

It will be Games Redux with a reduced complement of athletes.