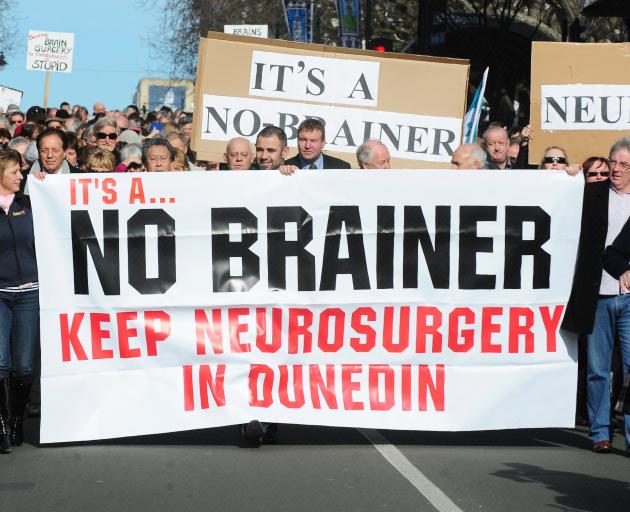 Marchers hold up a signs during a protest to keep neurosurgery services in Dunedin. Photo: ODT files
Thousands who enthusiastically rallied nine years ago to support the campaign instigated by the Otago Daily Times to retain neurosurgery in Dunedin will be dismayed at how things have turned out.

Back in November 2010 there were celebrations in Otago and Southland (where the Southland Times had joined the campaign too) when the expert panel, convened to look into the future of southern neurosurgery, decreed that a South Island regional service with nodes in Christchurch and Dunedin be established.

The panel's decision allayed fears the service would be centralised in Christchurch, resulting in longer times to treatment for some trauma cases, a downgrade for Dunedin Hospital, and a detrimental impact on neuroscience specialties at the University of Otago .

In 2012, both newspapers, with the ANZ bank, were in campaign mode again, this time working with the public to raise $3million to set up an endowment fund for a chair in neurosurgery at the University of Otago. It was considered this would help increase the sustainability of the service and make it less susceptible to political whim.

But what the community has received is far from the hoped-for safe, sustainable integrated regional service which would rise above any vestiges of ill feeling between the Christchurch and Dunedin centres.

The review of the service released this week delivered in stark detail how little of the panel's recommendations was achieved, describing the last nine years as a "litany of unfulfilled expectations and early departures".

Rather than a single service delivered on two sites, the review team found two small units with competing interests and witnessed a relationship marked by mistrust.

Maintaining an acute roster in Dunedin, independent of Christchurch, had been impossible without "significant health and safety risks for both clinicians and patients over many periods during the last nine years".

Failure to retain neurosurgeons resulted in an unsustainable and unsafe on-call roster.

The team said it heard complaints about behaviour that was a predictable result of unsustainable rostering.

The sole neurosurgeon in Dunedin has worked without local assistance or local cover for much of the past few months and the service never reached the intended roster of three doctors at any time in the last nine years.

One of the review recommendations, for the development of a national structure for neurosurgical care, seems sensible in a specialty with only 23 neurosurgeons across the country. But it will require co-operation among all units.

Other recommendations include revamping the South Island Neurosurgery Service (SINS) Board so it includes membership independent of the South Island DHBs and a clinical leader outside the South Island, better follow-up of patients, and exploring funding options free of the parochial interest inevitable in the current DHB-based set-up. Long overdue moves for safer on-call rostering have been put in place with assistance from Christchurch Hospital.

The SINS Board has rejected one of the 13 recommendations - that of decoupling the service from the University of Otago. The team argued that the sort of clinician the service needed was a versatile generalist, capable of providing acute services rather than academics seeking work in a highly specialised area.

However, the SINS Board considered this was a step too far and would render the service unviable.

Now light has been shed on this mess, the public needs confidence that the recommendations from the review team will be properly addressed before another nine years goes by. There is too much at stake to drop the ball again.

The SINS' board recommendations reek of 'doing wrong righter'. Is it possible that the mission of a "safe, sustainable integrated regional service" failed at the first hurdle because it was an impossible dream? Heroic, yes, heartfelt, yes, but realistic?

To answer your question Malcolm, realistic no, for the following reasons
1. It is very hard to recruit neurosurgeons to New Zealand that have acceptable training to comply with College and Medical Council requirements. It is even harder to recruit them to the South Island and it will be most difficult to recruit to Dunedin. Even our own trainees don't return to NZ and we are currently working on ways to improve this.
2. Before the formation of SINS, numerous neurosurgeons worked in and then left the unit and since SINS started, the situation has not changed. Dunedin has enough work to keep one Neurosurgeon very busy, but not enough to occupy the time of two, let alone the three which are needed to have a compliant call roster.
3. The recent review suggestion of uncoupling University and DHB appointments is 100% correct as "part time" Neurosurgery is not a common career goal for young active surgeons whilst older academics don't want to do basis spade work at the coal face clinically.
4. Multiple reports before the SINS review concluded that optimal and safe service provision should be provided by a single unit with a large cohort of surgeons. Any other option is unrealistic.