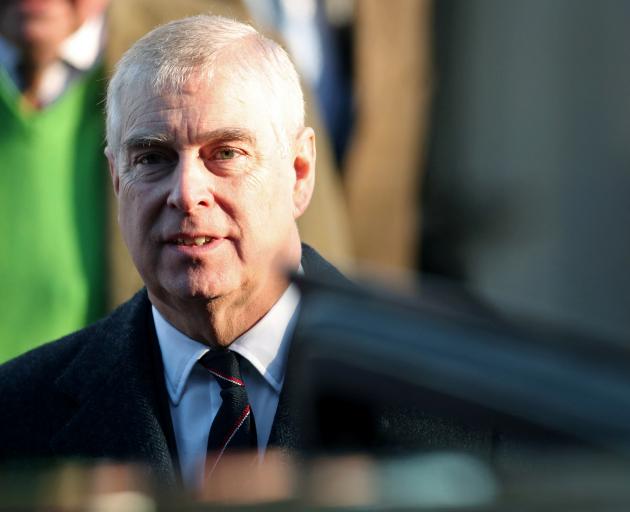 Prince Andrew has had his military links and royal patronages removed. Photo: Reuters
The ramifications of the scandal entangling Queen Elizabeth’s second son have reached far and wide.

Even as far away as New Zealand, where the Duke of York is no longer the Colonel-in-Chief of the Royal New Zealand Army Logistic Regiment (The Duke of York’s Own) following the Queen’s decision that all of the duke’s military affiliations and royal patronages should be returned to her.

Prince Andrew’s title was an honorary one, but its removal reflects the dishonourable mess in which he is embroiled.

The prince vehemently denies any wrongdoing in a civil case of alleged sexual assault which seems increasingly likely to come to court.

His accuser, American woman Virginia Giuffre says that when she was 17 she was forced to have sex with the prince.

Ms Giuffre has thus far resisted any temptation to settle her claim prior to a hearing, her lawyer saying it was important to her client that the matter be resolved in a way that vindicated her and vindicated other victims.

The latest attempt by the prince’s lawyers to have the case thrown out was rejected last week, after they failed to convince a judge that Ms Giuffre had waived her right to bring her latest case when she signed a confidential settlement with the disgraced late Jeffrey Epstein, whom she says brought herself and the prince together.

The prince may yet opt not to defend the case but that would result in a default judgement in Ms Giuffre’s favour, with all the implied besmirchment of the prince’s reputation that would entail.

While it will offer little comfort to a Royal Family which would very much like this scandal to go away as quickly and quietly as possible, fans of the Rule of Law will be heartened that the prince’s exalted status has thus far been no deterrent from his possibly facing the court.

While some people might wonder why an ignominious affair involving the person ninth in line to become New Zealand’s head of state matters this far afield, that is one important reason why it should.

Although not so seismic as it would be if a similar firestorm had surrounded a prince or princess much closer to becoming this country’s monarch, it could also reawaken the issue of whether 21st century New Zealand’s constitutional arrangements should still reflect its 19th century history.

Many ghastly details of the appalling crimes of Epstein and his recently convicted associate, Ghislaine Maxwell, have emerged in recent months, and no doubt many more will become public should Ms Giuffre get to plead her case.

In a year in which the British Royal Family should be basking in the plaudits afforded Queen Elizabeth for her platinum jubilee, it will likely instead be ducking for cover to try to avoid being tainted by association with the prince.

This is, of course, a forlorn hope as a Windsor then remains a Windsor now, no matter how much social distancing is put in place.

It serves as a salient reminder of the pitfalls of privilege — with rank and the liberties that can afford comes the price that must be paid if personal behaviour fails to match acceptable standards.

A loosely comparable situation is unfolding four minutes away down Birdcage Walk, where British Prime Minister Boris Johnson has done little to dispel questions about his fitness for office with a lamentable response to questions about whether he attended a likely illegal party held in his own back garden during lockdown.

Having done all he could to avoid admitting having been at the gathering before finally last week apologising for his presence there, Mr Johnson has shredded a credibility already almost as thin as his blowaway hair.

Although as an isolated incident ‘‘party-gate’’ pales into insignificance when contrasted against the magnitude of the allegations faced by Prince Andrew, when combined with a host of transgressions and omissions by Mr Johnson during the course of his time in office, the same lessons can be learnt.

No-one is so important that they can ignore the laws of the land, or common decency ... and those who wield power must do so with propriety lest they be faced by the headlines staring at Mr Johnson and Prince Andrew each morning.

'No-one is so important that they can ignore the laws of the land, or common decency'. Oh I dunno, why not ask Sir Tony Blair if he was ever prosecuted for an illegal war that cost millions of innocent lives. Or handed a knighthood.

Not the same. Royals are generally above the storm; due process is rare.

Churchill was honoured for visiting war upon South Africa, Turkey and Continental Europe.

How's about Sir Jimmy Saville then?