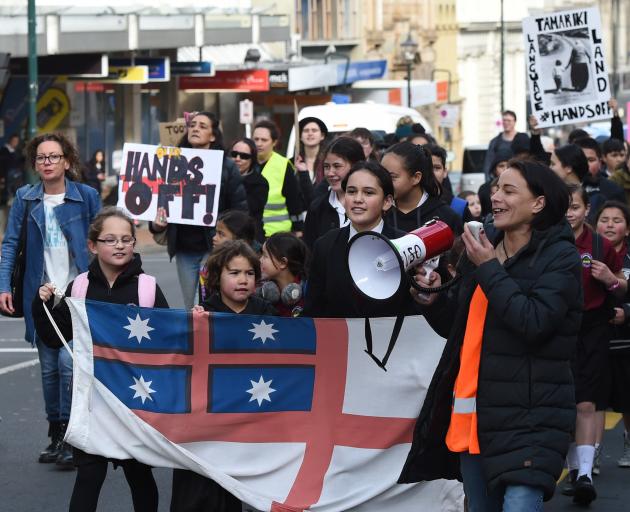 About 80 people in Dunedin joined nationwide protests earlier this year calling for change at the department of Oranga Tamariki. Photo: Gregor Richardson
It was an unfortunate juxtaposition.

About the time Oranga Tamariki was admitting its considerable shortcomings in the highly publicised botched May uplift of a week-old Maori baby in Hawke's Bay, harrowing stories of the effects of historical abuse of children in state care were being aired before the Royal Commission of Inquiry into Abuse in Care. Two and a-half years on from the introduction of children's ministry Oranga Tamariki, it seems there is a considerable way to go before we can have confidence in the way the State deals with children considered at risk.

It is easy to be sympathetic to workers within the ministry because we believe they are all doing their darnedest to keep children safe, but Melanie Reid's Newsroom documentary on the case at the centre of the damning internal review released last week showed a shocking high-handed and unfeeling intransigence from those wanting to uplift the baby. In June, when Ms Reid's documentary was causing consternation among those who viewed it, Children's minister Tracey Martin and Orangi Tamariki chief executive Grainne Moss seemed determined to downplay its significance, implying it had been too selective to be an accurate portrayal. The documentary was vindicated in the review, showing what a feeble and cynical public relations stance that was. It was an unusual misstep from Ms Martin who is still defending her decision not to watch the 45-minute documentary, telling us that she did not need to see it in order to do her job.

Maybe not, but it would have given her a greater insight into the public outrage about that case and wider concern about the number of uplifted children, many of them Maori. Without the documentary, would we have had the external inquiries into Orangi Tamariki's practices by the Children's Commissioner, the Ombudsman, the Whanau Ora Commissioning Agency and the Waitangi Tribunal? All of these have yet to issue their reports, but it is unlikely they will be happy reading.

Children's Commissioner Andrew Becroft, whose inquiry is concentrating on the uplift of babies aged up to three months, has said the internal review described a litany of failure at every step and a damning indictment of inadequate social work practice.

Given that uplifting a baby from its mother soon after birth is a hugely significant thing for both mother and baby and wider whanau, it is hard not to be incredulous at the apparent lack of proper oversight of how Oranga Tamariki employees were behaving in these uplift cases. As a result of the internal review, Oranga Tamariki has announced changes to the uplifting process including extra checks on ``without notice'' applications to remove children, better involvement of families and more training for social workers.

Some Maori leaders remain unimpressed. Among them is the chairwoman of the Whanau Ora Commissioning Agency, Merepeka Raukawa-Tait, who wants Oranga Tamariki shut down.

She says it has a toxic culture and has been riding rough-shod over families, taking babies without any consideration for the devastating intergenerational impacts.

Ms Raukawa-Tait suggests it could have a core ministry advising the minister, but that the rest of its work should be done by Maori themselves, using Maori service providers, Whanau Ora navigators and others in the community.

She acknowledged there were some brutal facts for Maori to confront, but the State's existing approach of removing children was not the answer.

Ms Martin says she is trying to build trust with iwi on the vital areas of prevention and early intervention. She knows culture change is needed on the front line, and faster, but also acknowledges that there has been only two and a-half years to change a situation which has been decades in the making.

Whether this ministry can succeed where its predecessors have failed remains to be seen, but patience is running out and keeping the spotlight on its work will be essential.