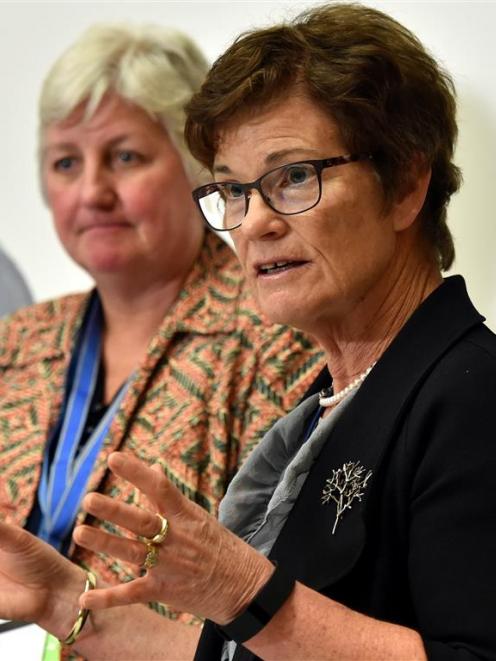 Although less than the $39.7million forecast figure the board inadvertently released at the end of last year, if it comes to pass this financial year, it will be the worst deficit the board has posted.

The 2014-15 deficit was the last straw for the Government and the health board was sacked and a commissioner appointed in the middle of last year.

The new forecast deficit comes despite the board's recently disclosed urgent cost-cutting measures under chief executive Carole Heatly and Commissioner Kathy Grant - a "quick hits'' list of $1.4million, and other savings under the tags of "focused improvements'' and "strategic projects'', designed to reduce spending by $4.1million.

The forecast deficit was disclosed as Ms Heatly and Mrs Grant appeared before Parliament's health select committee this week for the board's first annual review since Ms Grant was appointed.

For anyone already worried about the state of the South's health services, and the future of Dunedin Hospital's clinical services building, the outlook painted by the new figure could not be more bleak.

Of course, the South is not alone in feeling the squeeze.

The country's district health boards have been told to make $138million in savings over this financial year as the Government puts the onus on boards through a new DHB-owned company, NZ Health Partnerships, after it wound up its health cost-cutting entity, Health Benefits Ltd, amid controversy over its effectiveness.

Medical staff now fear the only perceived "fat'' left in the system for boards to cut will be staff, that vacancies will not be filled, and that patient care will suffer as a consequence - a claim Health Minister Jonathan Coleman has denied.

It is without a doubt an unsettling time, and the anger is palpable.

There will be many in the South who feel the SDHB's appointment of a UK firm, April Strategy, to run patient feedback sessions next month and help the board find its "vision, values, and behaviour'', is too much to stomach.

Most members of the public and health users would think they have made their views plain enough in recent years, without needing to hire overseas consultants to facilitate more information-gathering.

They are feeling left out of the feedback meetings loop, seeing it as a further snub to the region.

Residents are in limbo over the fate of the Lakes District Hospital, which may be removed from direct control of the health board and put into a community health trust.

The planned redevelopment of the hospital was abandoned, and the community is still fighting to get a promised CT scanner.

The arguments continue, in Parliament, in hospitals and in the community.

How, quite simply, to balance the health sector's needs with the money in the pot?

It cannot be a pleasant time for anyone involved in the decision-making, let alone those feeling the pinch on the front line.

A focus of the SDHB's "major change programme'' (of which the feedback sessions are part) is improving staff morale.

The public would likely agree that is worthwhile.

Indeed, what seems increasingly remarkable is that feedback - to the pages of this newspaper at least - about hospital staff is mostly positive.

Despite what are very difficult conditions and times, staff are still clearly providing quality care.

Long may that last.