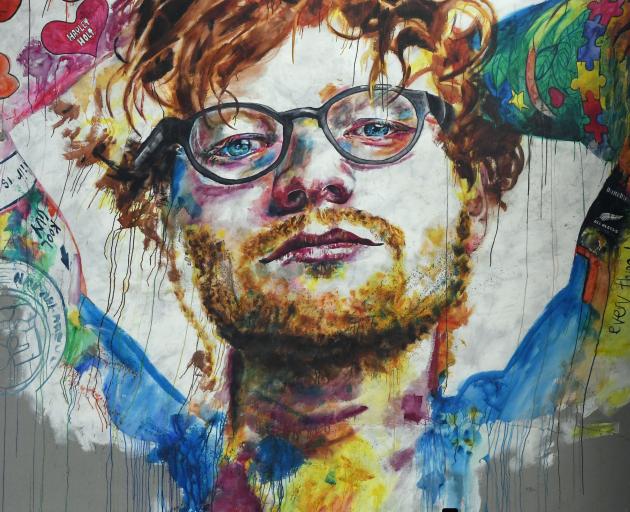 The Ed Sheeran mural. Photo: Craig Baxter
The spending of $8350 by the Dunedin City Council on a mural of international pop superstar Ed Sheeran has prompted much opposition, as well as considerable support.

The money would be better spent on road repairs, some say, or at least a mural of a prominent figure or band, such as Ralph Hotere or The Chills. Who is Ed Sheeran anyway? Luminaries like Elton John and premier bands such as Fleetwood Mac have visited without thought of daubing their images on a city wall.

Meanwhile, the council is forever telling ratepayers they must cough up with increases above inflation rates, that millions of dollars are needed for water services, for drainage and sewerage works, and city enhancement in all sorts of ways. Every bit of saving adds up, even if more than 8200 murals of Sheeran could be painted for the new tendered cost of the Otago Peninsula shared pathway extensions and improvements.

We are on the side of prudent expenditure and against the waste and inefficiencies that so easily infiltrate all organisations - especially those like councils not disciplined by the threat of bankruptcy.

Nevertheless, while councils must concentrate efforts and spending on the basics - on the likes of the three Rs of roads, rubbish and reticulation - there has to be scope for other projects, and not just the parks and gardens, libraries and swimming pools.

With particular purpose and with restraint, the council can spend on the likes of New Year or Matariki, and, in this case, the Ed Sheeran weekend. This, however, does in no way excuse the size of the rates increases proposed.

Whether many Dunedin residents might like his music or not, Sheeran is a worldwide phenomenon at his peak, and not a fading global star or a well-loved survivor from the 1970s. Next to the Beatles coming to Dunedin in the 1960s, it is difficult in living memory to imagine a bigger popular musical event in the city.

The figure of 110,000 people attending across the three concerts (even if some go more than once) is staggering for a city as small as Dunedin and one with no large centres nearby. And these are real ticket-sale figures, not the pumped-up numbers often promulgated by promoters of street or park events.

The Bledisloe Cup tests of the 1990s with their tent cities and the town abuzz are midsize by comparison. Easter is a huge weekend for Dunedin. It is as if there are three drawcard rugby tests in a row.

Given this context, $8000-plus for a mural is a nice investment and gesture. It adds to the weekend's ambience, and, judging by national publicity, has had the side effect of boosting the image of Dunedin's street art.

The mural has come up well, and artist Tyler Kennedy Stent and the council can be well pleased. It is a modest size and nicely placed in Bath St so it is not in your face, so to speak, but is accessible. Mobile phone selfies are already popular and there could well be queues at Easter.

One wonders if there might be traces of undiagnosed snobbery involved in the opposition. Would there have been so much overt negativity if the mural had been for a visit by someone such as Pavarotti?

As it is, Easter weekend and the Ed Sheeran concerts are an opportunity for celebration and positivity as tens of thousands of visitors come to town. The mural is one tiny part of that.