A solid debut for Key 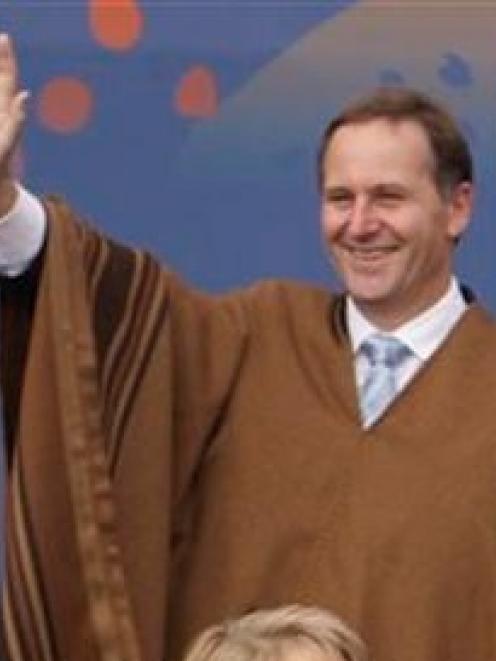 New Zealand's Prime Minister John Key wears a traditional Peruvian poncho as he waves during the official group photo of the 16th summit of the Asian Pacific Economic Cooperation, APEC, in Lima, Sunday, Nov. 23, 2008. Photo from AP.
John Key's entry on to the world stage at the Asia-Pacific Economic Co-operation summit in Lima, Peru, has been a solid beginning for the new prime minister, pitched at the right level for a debutant leader.

He was forthright in his views, and reportedly pragmatic rather than flashy in his speeches and presentations. Addressing Apec's Business Advisory Council, also known as the CEO's summit, he put the blame squarely on banks and other financial institutions for the world financial crisis.

He said there had been a "recklessly complacent attitude to risk" and credit had become out of proportion to real economies.

"We have seen an expansion of credit and leverage at levels that were so unprecedented and arguably so uncontrolled that they now threaten the very stability of the world's banking system," he told the summit.

In this display of tough talking, Mr Key signalled that he was intent on establishing a presence internationally as a straight-shooter, but he also took advantage of the occasion to distance himself from his former associations with the banking and finance sectors. Reporters covering the trip also saw another side of Mr Key: at times he "gushed" and at others appeared "gauche", thus living up to his role as the new kid on the Asia-Pacific block.

But he was, as he has shown several times since winning the election a little more than two weeks ago, refreshingly candid.

There were signs of humility, too, in his preparations: he sought out Helen Clark for a briefing, and appeared grateful.

"She was genuinely good and so knowledgeable about these things. Her personal assessments were highly accurate. Generally I said to [leaders] that I had spoken to Helen Clark before I left and she passed on her warm regards. She is well thought of," he told the media.

And while he spoke warmly of the achievements of the summit, he was also cautious about timeframes for turning the world crisis around, describing the 18 months, belatedly inserted in the final communique at the behest of Peruvian President Alan Garcia, as "aspirational".

It was a carefully chosen word, showing that Mr Key is learning fast.

As one of 21 Asia-Pacific leaders to sign a declaration pledging to act "quickly and decisively" to overcome the global financial crisis, he was faced with balancing the political income from unguarded and unrealistic optimism against the dangers of promising too much too soon.

He is intimately familiar with the financial markets and has a keen appreciation of the precarious plight in which the international monetary system finds itself.

So what, exactly, did the leaders of the forum decide? As is often the case with such meetings, the details are few and the stated intent again somewhat aspirational.

The leaders agreed to send their foreign affairs ministers to Geneva next month in an attempt to restart the stalled Doha Round of World Trade Organisation (WTO) talks.

There were commitments, welcomed by Mr Key, to pursue stimulatory fiscal policies and to avoid erecting new trade barriers in the aftermath of the global market meltdown.

And there were concerns expressed about instability in food prices, support for "decisive and effective long-term co-operation" on climate change, and agreements to battle corruption and piracy.

These are necessary and laudable goals, but as Mr Key also says, the onus is now on leaders to make sure that ministers and officials carry through on their words - and resist domestic pressures to behave otherwise.

Little is set in stone.

All the signs are that the climb out of a global recession will be painful and painstaking, and that it will depend on concerted international actions and policies.

New Zealand is more than most dependent on free trade and access to markets, so it was critically important that Mr Key attended the forum.

It is also a healthy sign of a maturing democracy that he was able to leave the country a day after being sworn in as prime minister with advice from his predecessor in his briefcase - no small achievement and one for which both Mr Key and Miss Clark are to be commended.