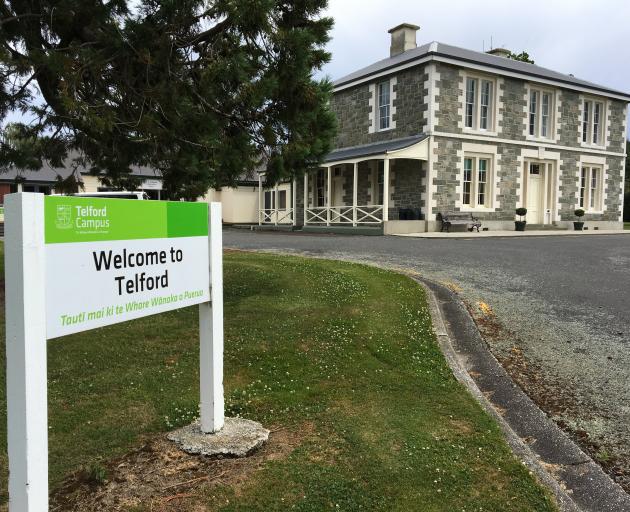 Given the importance and quality of its work, Telford should have the opportunity to grow over that period and beyond.

Telford itself so nearly went under, and 11th-hour efforts were needed to keep the doors open. Continuing uncertainty about funding and its future knee-capped student recruitment, and numbers have halved in recent years.

Staff numbers were cut when SIT took over, having earlier been slashed as well. The polytechnic funding model had failed badly for intense vocational and practical training. Teaching the likes of shearing, chainsaw use and tractor operation is far more intensive and far more expensive than large numbers in classrooms.

Telford was independent before Lincoln University took over in 2010. It, and Taratahi from 2017, could not make a go of it, although each was also accused of "pillaging" Telford.

Telford, which began in 1964, takes students from all around the country. Its core is the Certificate in Agriculture, and it offers various veterinary support, equine and other courses.

It, and its 921ha of farmland, is an integral part of the South Otago landscape. It is strongly supported locally and has developed a dedicated esprit de corps which has helped it survive the rough last decade.

Outside owners have done more harm than good, and it behoves SIT to foster its identity and autonomy. Disconcertingly, even an inquiry to Telford about roll numbers had to be referred to SIT and are yet to be obtained.

SIT itself, in the face of vocational and polytechnic "reforms", has argued vociferously for the value of independence, local initiatives and a local sense of purpose and ownership. It must apply those same principles to its Telford faculty. It must provide support and expertise where it is needed, while minimising the costs of potentially crippling overheads. It must empower the Telford staff and the South Otago community to lead initiatives and maintain and build quality.

After the two years, whatever the shape of vocational education and SIT's situation, that independence must continue. Even as Telford is forced into national curriculum strictures, its points of difference that have made it highly regarded must be maintained.

This includes the fact core students live on campus. They can be nurtured and supported in ways distance learners can never be, even if distance teaching is much cheaper. In the longer term, how the Telford experience is funded will be critical.

As Clutha Mayor Bryan Cadogan has said, people have dedicated their life endeavours to Telford, which would never have been the case if it was part of a conglomerate.

Telford has weathered tumultuous storms, and the first priority this year was to survive. That has been achieved, and the new funding means two more years of financial support. The outlook, while not without threats and challenges, looks much brighter.