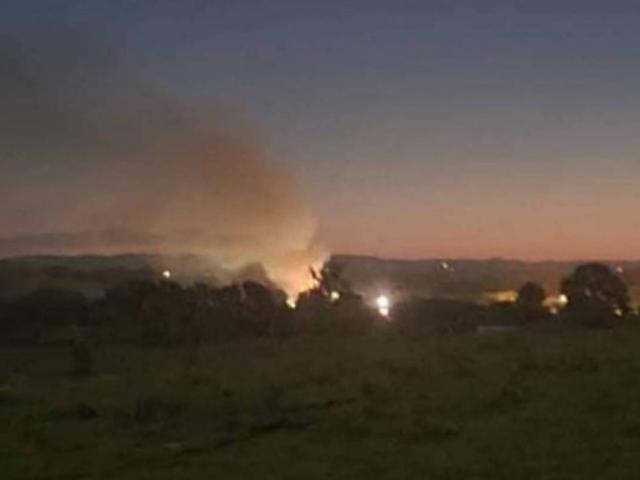 A view of Waikeria Prison where inmates had been on the rooftop burning mattresses. Photo: Supplied
It was an odd juxtaposition. On New Year's Eve riotous behaviour was occurring on two rooftops — unruly teens stomping on a cafe in Whangamata and 16 inmates of Waikeria Prison holding out after setting fire to part of the facility days earlier.

There may be little public sympathy for any of the perpetrators in either event, but admiration for the way both incidents were resolved without loss of life or serious injury.

People are already facing charges over the Whangamata event, but we have yet to hear what action will be taken against the Waikeria prisoners.

The top jail on the Waikeria site, built in 1911, was damaged beyond repair in the six-day incident.

Inmates involved in the incident were reportedly protesting about conditions at the prison, including the state of the water, cramped and insanitary conditions, access to clean clothing and bedding, and the lack of progress on Hokai Rangi, the strategy to reduce over-representation of Maori in prisons.

The protest claim has been dismissed by prison authorities and the Minister of Corrections Kelvin Davis.

They argue prisoners had not raised concerns through legitimate avenues, although whanau say attempts to complain were stymied.

There is no argument that the jail is well past its use-by date and indeed a new jail is being built, due to open in 2022.

National's corrections spokesman Simeon Brown has argued if Labour had stuck with National's mega jail concept, part of it would be open now.

This political point-scoring ignores the fact conditions at the top jail did not become decrepit and bordering on inhumane, to borrow chief ombudsman Peter Boshier's description, overnight, and critics are right to ask why prisoners were not moved out long ago.

The report Judge Boshier released in August last year, after a 2019 surprise visit to the jail, found most cells in the high security complex (HSC) were double-bunked and cramped.

Inmates were unable to sit upright on the bottom bunk because of the proximity of
the top bunk.

Cells were poorly ventilated and uncomfortably hot and prisoners ate meals on the bunks near an uncovered toilet. It seems hard to believe Corrections should need the ombudsman to point out the undesirability of such conditions. (Many toilets did not have lids or seats because they had previously been broken off and used as weapons, according to Corrections.)

Investigators found there was a lack of towels, sheets, and pillows, and bedding in poor condition. A shortage of clean and suitable clothes was raised by some prisoners.

Complaint forms were not readily available in the HSC and, in the ombudsman's survey of prisoners, 77% of respondents said they did not have faith in the complaints process. In a six-month review of complaints, inspectors found only 67% of complaints had been responded to within the required three-day time.

There was much more in the report, including staff not activating body cameras before the use of force (something also noted in the recent damning report of conditions at the high security jail at Paremoremo).

Corrections chief executive Jeremy Lightfoot says much progress has been made since the ombudsman's visit, but were the conditions here so poor for inmates and staff, any improvements could only be lipstick on a pig?

Two reviews have been announced — an operational review by Corrections' chief custodial officer to provide quick insights, and a second longer review by the independent arm of Corrections, the office of the Chief Inspector. This will examine the lead-up to the incident, how it unfolded and any systemic issues there might be.

Judge Boshier is maintaining a watching brief on the situation and has yet to decide whether these reviews will be sufficient. We hope he decides to carry out his own investigation to ensure all with an interest in this can be confident there will be no whitewash.

Truckloads of p*ss were offloaded at Whangamata before New Year. Commerce.