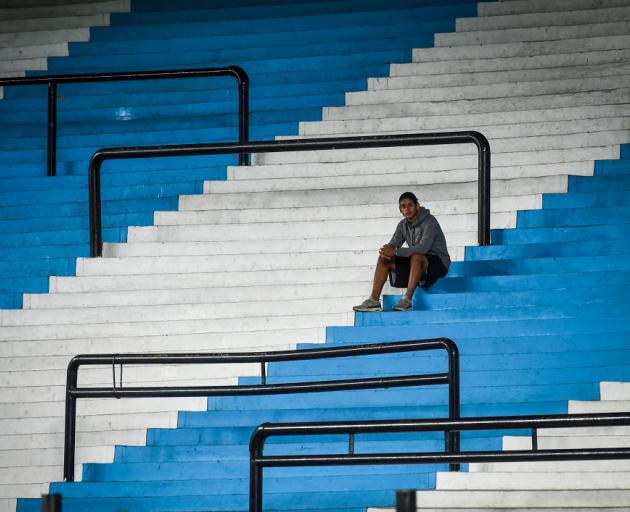 A ballboy waits in the empty stands of Presidente Peron Stadium before a Copa Libertadores football game in Avellaneda, Argentina, last week. The game was played behind closed doors to prevent the spread of Covid-19. Photo: Getty Images
Oh, but it’s only sport. It’s really not that important.

Fans and athletes have always (mostly) got it — always (mostly) understood the essential premise of sport and physical activity being fun and worthy and (mostly) healthy but, no, not being anywhere near as important as education or cancer treatment or the basic requirements of life like clean air and water.

Not as important as those things, but still quite important.

So, as the Covid-19 pandemic takes hold, it is perfectly fine, perhaps while still keeping it in perspective, to lament its effect on sport and to worry about where things might go in the coming months.

Like dominoes, sporting competitions big and small around the globe are falling over.

The major American players like the NBA and the NHL have suspended operations, and the massive March Madness college basketball tournament will not be tipping off.

The English Premier League, like virtually all major football competitions, is on hold, much to the chagrin of Liverpool fans awaiting that elusive title.

There will be no Masters golf next month, no Formula One motor racing for some time, and potentially no Olympic Games this year.

Closer to home, Super Rugby is officially in a suspended state, the National Rugby League appears in a parlous state, and the A-League looks to be in a confused state.

Amateur codes are being affected, too.

More than 2000 gun young rowers have had their Maadi Cup hopes dashed, and it is surely only a matter of time before the likes of club rugby and club netball and club netball are affected, to some degree, by the pandemic. (Update: In a perfect illustration of how fast things are progressing, almost all grassroots competitions have decided in the past 24 hours to suspend proceedings. It is possibly even time to consider the possibility none of the winter codes will see much action this year.)

The thing to recognise in this almost unprecedented situation is that is not just athletes — not just basketball superstar LeBron James or Highlanders journeyman Mitch Hunt or Steel talisman Gina Crampton or the bloke with the beer belly who plays prop for West Taieri — who are affected.

At the professional level, there are coaches, managers, trainers, doctors, administrators, ticket-sellers, reporters, concession stand operators and others whose livelihoods are being threatened.

There is lots of money in some of these professional codes but none has a bottomless pit. Witness the NRL basically admitting it will go bust if it is unable to provide a ‘‘product’’ to its television masters this season.

Sport is now a massive business.

Beyond the dollar figures, sport represents one of those intangible benefits of a healthy society.

It’s about a communal interest, a passion, a distraction (much-needed at a time like this), a sense of community.

Above all, sport — especially at the elite level — is nothing without its fans. Witness the scenes of soul-less football and rugby league and netball games being played in empty stadiums. What is the point?

Sport, like much else, has a very uncertain future as we hunker down and try to limit the spread of Covid-19 as much as possible.

But it will be back, eventually.

It needs to come back.

A trivial pursuit it may seem to some, but it is incredibly important to many more.

Maybe you should say who said sport is "trivial".