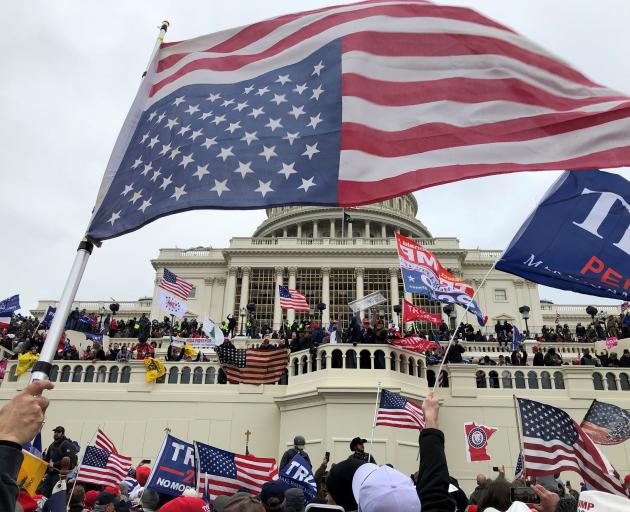 The so-called “leader of the free world” has been rocked by the invasion of the Congress by Trump supporters.

A deluded mob, egged on initially by the president, pushed its way up the steps and into corridors and offices to try to stop Congress confirming Joe Biden as president.

The scenes are more like those from a “banana” republic than a long-established democracy. The peaceful and proper transfer of power is at the heart of democracy.

It is also scary all the living former secretaries of defence this week felt the need to write a letter saying the military must be kept out of the political process.

Lots of questions will need to be asked about the role of Trump and the whole incident. There must also be worries about Trump in his last two weeks in office.

There is, nevertheless, a silver lining — assuming the dust settles, Trump does nothing rash and the transfer of power takes place on January 20.

While Trump never alienates his core backing, his recent behaviour and his support for this protest, this “insurrection”, must appal even a good number of the more than 70million who voted him for president in November.

Although he could get away with endless lies and numerable misdemeanours, surely, his and the protesters’ actions this time have gone beyond the pale for another group of Americans. They take their Constitution and processes seriously.

It had been feared Trump’s hold over the Republican Party would mean its politicians would remain subservient to his bluster and bullying, to the Trump way. He could also, it was imagined, stand again for president in four years’ time.

Trump, however, backed even many of his most loyal supporters into a corner. Vice-president Mike Pence saw he had little choice but to defy his president when he refused to reject the Electoral College vote confirming Biden’s victory. Consequently, he, like many sacked or resigned Trump appointees, was excoriated.

Many Republican senators, including the leader of the Senate, have refused to follow Trump’s illogical and illegal demands to challenge state votes.

Trump was useful for the Republican Party in cutting taxes for the wealthy and appointing conservative Supreme Court judges. Many senior party members, though, will be pleased to see the back of him. Such is his current behaviour, they might get their wish.

The United States had a close escape when Trump was voted out. Ironically, Trump might well have won were it not for his handling of Covid. The Democrats, thankfully, choice a moderate who could win centre ground.

Imagine the damage to American democracy another four years of Trump would have wrought.

If democracy in the United States did not have deep roots, one wonders what Trump would have been able to do to maintain power and to repudiate the “stolen election”.

This has warnings for the rest of the world. The bombardment of lies, the attacks on the media and the creation of “fake news” promotes a setting where there are no basic shared facts, no shared standards and values.

Under such circumstances, the likes of Trump could get away with just about anything. Just, maybe, the circumstances of yesterday and last night are enough to convince enough Republicans to say enough is enough.

There are lessons, too, for New Zealand. Our democracy looks solid for now. But so had that of the United States before Trump came on the scene.

If a demagogue is elected, if the likes of free speech are curtailed, if a crisis is manufactured or taken advantage of, then our democracy, too, could be dangerously tested.

New Zealand's democracy shows the advantage of being a small nation state. The US's federal structure highlights the difficulty of trying to force consensus among very different regional areas. Thank goodness the UK electorate had the courage to reject the supranational governance structure that was imposed on them by stealth over the years.

I'm not sure how NZ democracy, whatever that might be, demonstrates the advantage of being a small nation state over a federal form of govt. The USA has managed the federal system for some 250 years and built strongest and richest democratic nation in the world. It has taken a demagogue to truly test its strength and he has failed. It wasn't the federal system that gave him a moment in the sun, it was a very clever campaign to the the prejudices and fears of the citizens across the entire nation.
Time will tell if your assertion that the UK has had a lucky escape from the EU. The British voters were duped by liars and baseless conspiracy theories to vote exit. They are learning already that their independence from the supernatural governance structure might not be the godsend they hoped for. I'm picking that most Brits will suffer a gradual drop in their standard of living over the next few years and the EU will surge ahead. Isolationism does not work. While NZ is an independent nation we have tied ourselves, in terms of trade, to the world, we are true internationalist and long may it stay that way.

Demagogue? Are you talking about Biden before he assumes office? Trump got into office because the people were (and still are) sick of the elites ruling the country with total disregard for them and their rights. The rioting at the capital yesterday is just as much Nancy Pelosi and the democrat’s fault. Four years of fake news, Russia collusion, a fraudulent impeachment and a do-nothing congress haven’t helped the 10% approval of the US congress. If you really think a guy who spent 9 months in the basement of his home and couldn’t get more than 100 people to one of his political rallied won the election, well; you just not very bright. There is no way Biden got more votes than Obama or Clinton! You really think NZ is an independent nation? China owns 5% of New Zealand outright. In 2003, New Zealand’s goods exports to China constituted about 5% of the total, based on historical data from the United Nations. Today, it is about 26%. Hate to burst your bubble but that is not an independent nation! NZ is a Podunk, South Pacific country filled with people like yourself who over estimate the importance of what is, undeniably, an irrelevant government.

Well Well. I can almost hear tRump's Russian accent as I read his words. Seems ODT has it's first Russian troll.
Impeached ex president trump was one of the elite, he was not, and never will be, one of "the people". He abhors "the people". He's a billionaire who has done everything he can to protect and enrich himself and his people, the 1%'ers, with total disregard to the rights of "the people". As to the rest of your nonsense about, Pelosi, fake news, Biden, fraudulent elections, all I can say is stay away from wind generators so you don't get cancer, don't get Bill Gates Covid 19 vaccine so you can avoid his microchip, and keep wearing your tinfoil hat around cell towers to avoid 5G. Oh and stay out of Pizza palours in case Hillary nabs you for evil purposes.
Latest figures from Land Information NZ shows that 3.3% of NZ land is foreign owned. I prefer official figures and not the made up rubbish from right wing websites that are fed the statistics by the Ministry of Digital Development, Communications and Mass Media of the Russian Federation.
Your assertion that NZ is irrelevant internationally is bunk. Any review of international media will show this.
Go back to Russia