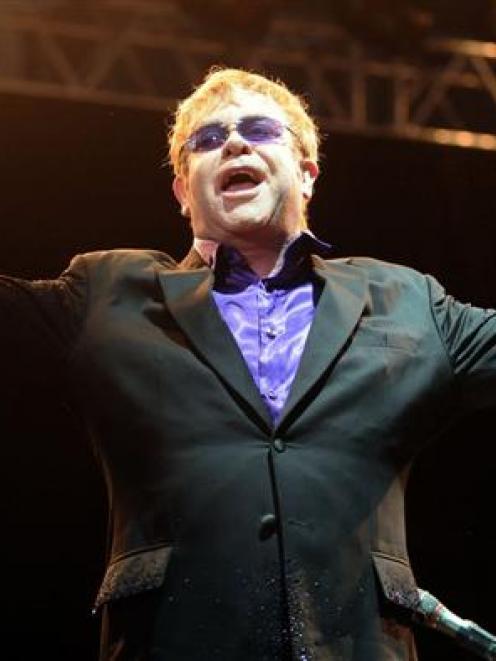 Elton John at Forsyth Barr Stadium on Friday. Photo by Craig Baxter.
The hostel was an old 1950s prefab building. I'm picturing it as a jaded yellow but that may be simply the sepia fade of memory. It was, after all, 38 years ago. They paired us up alphabetically. My room-mate was a bloke called Chan, from Malaysia, but having had a year at Feilding High, he was fast acquiring the Kiwi argot.

We hung his dartboard on the wall and connected up his record player. Vinyl was still all the rage in those days. I provided the records. One of them was an Elton John album called Don't Shoot Me, I'm Only the Piano Player. We played darts to Crocodile Rock, our aim steadied by a round or two of bourbon and coke.

Chan was an electronics sophisticate and hooked the turntable up to an alarm clock. We woke in the morning to the sounds of Daniel - "travelling tonight on a plane" - and rubbed the sleep from our eyes to the tune of Elderberry Wine. (Three or four years later, still in thrall to the latter, I made a batch of it from the bush in the back yard of a Christchurch flat.)

I acquired some of the back catalogue: Tumbleweed Connection, for a little Country Comfort - to go with the Southern Comfort. This was Palmerston North, after all, in 1973. And later purchased Madman Across the Water.

Chan liked Elton. He must have, because I recall we wore deep grooves in those albums, much more than the other mainstays of my paltry record collection: Joe Cocker's Cocker Happy, Neil Young's After the Goldrush or what would now be a rare collector's item if I still had it, Osibisa, and Steely Dan's Can't Buy a Thrill.

So it would be safe to say that for some months of that first university year in that old hostel on the Massey University campus just outside the town, Elton John became the sound track of our lives.

Intermittently he would re-enter it in later years, either directly or tangentially - 1991's Two Rooms: Celebrating the Songs of Elton John and Bernie Taupin being a case in point, Sinead O'Connor's haunting cover of Sacrifice even now reaching out across the years from a house on the Hackney/Islington borders.

So it was always going to be a safe bet that when the Dunedin Elton John concert was announced, I was going to put my hand up for a ticket.

Notwithstanding criticisms to the contrary, I thought it was a cracker. Call me blind, tone deaf or just fortunate enough to be sitting in a good spot, but for me it was a dynamic performance by a highly entertaining and consummately professional musician - and his equally polished band. And unlike many of his age, his voice still holds up.

I didn't take notes of the playlist but most of the greats were there: from Rocket Man and Honky Cat to Saturday Night's Alright for Fighting and Bennie and the Jets. Genuinely seeming to enjoy himself, he just played on and on, taking us back through the years to summer days drinking elderberry wine, to times when the songs he sang took squatters' rights in the musical soul of a generation, carefree, footloose and - in the words of an eloquent and beautiful contemporary Joan Armatrading - "open to persuasion".

Occasionally when I catch one of those early Elton songs, nostalgia sticks its foot out and trips me up: it's 8am on a Palmy winter morning in 1973. Daniel is leaving tonight on a plane. Chan is still asleep.

I wonder whatever became of him.