At the feet of a musical legend 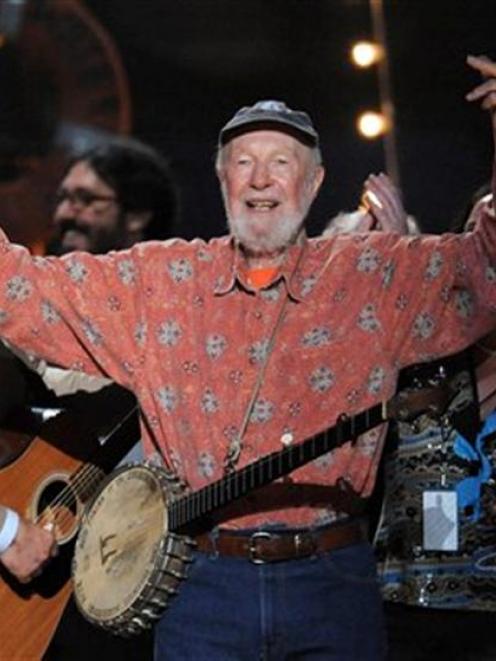 Musician Pete Seeger (centre) walks past (left to right) Joan Baez, Bruce Springsteen, Patti Scialfa, Tom Morello and Dave Matthews, during a concert celebrating Seeger's 90th birthday in New York on Sunday. Photo by AP.
Some time in 1963 or early '64: a gentle, softly-spoken American arrives at Avele Agricultural College, Western Samoa.My father is the principal. We live on the compound, a few kilometres up the hill from the capital, Apia, and more or less adjacent to Vailima, the old homestead of Robert Louis Stevenson.

I am 9; the American is 44. He carries a 12-string guitar, and a banjo. He sings for the students, who hail from all corners of the Pacific, and teaches them a few chords. He listens to their own music, mostly accompanied on five-string guitar.

When the jam session is over, he comes home to stay.

I don't recall much else. I fancy he tousled my hair and shook my hand, but perhaps that is memory romanticising my fleeting brush with a musical legend.

For his name was Pete Seeger and he sang songs like Little Boxes, which had topped the hit parade that year, Goodnight Irene, co-wrote the anti-war classic Where Have all the Flowers Gone, and either wrote or popularised other classics of the time: If I Had a Hammer, Wimoweh, Kumbaya, Turn, Turn, Turn, This Land is My Land, and of course, that great anthem of hope and longing, We Shall Overcome.

Many of them I knew, or vaguely recognised, because we had in the house a Kingston Trio album. This group had enjoyed hits with much of Seeger's repertoire and that of his former group, the Weavers.

What I didn't know about Seeger, and only learned much later was his part in the continuum of a certain strand of popular music: a music that borrowed and built on the hobo songs of Woody Guthrie, the mournful spiritual-inflected blues of Lead Belly, the old black slave chants, the hymns of the migrant worker and the common man, which set down a blueprint for the protest songs of the '50s, '60s and '70s and which drew a lineage from Guthrie, through Seeger and the Weavers, to Woody's son Arlo, to Bob Dylan and Joan Baez, to Bruce Springsteen and Billy Bragg, Emmy-Lou Harris and many others.

Seeger was a communist before it was a quite such a dirty word, remained so when it was no longer fashionable, and, as he has admitted, too long after he should have known better - when Uncle Jo Stalin had put paid to that utopian vision with his gulags and secret police, his political assassinations and brutal dispatch of millions of Soviet dissenters.

An album he recorded as a young man and member of the Almanac Singers, Songs for John Doe, released in 1941 and which took an anti-draft and anti-war line, is often used to portray him as an unreconstructed apologist for Stalin. A year or so later the group released an album in support of the draft and the war effort, but it is to the former that critics always return.

Seeger himself served in the war, ostensibly as an aircraft mechanic, but by his own reckoning spent much of it "strumming his banjo" and entertaining the troops. His group the Weavers emerged out of the disbanded Almanacs and in the '50s became hugely popular, although their material - considered beyond the pale in McCarthyist America - saw them blacklisted on many radio stations.

Seeger himself was called before the House UnAmerican Activities Committee which required anyone suspected of left-wing sympathies to recant their beliefs and name fellow-travellers.

Some named names and were rewarded with the continuation of their careers, others pleaded the Fifth Amendment (which asserted that their testimony might be self-incriminating), but Seeger - as history (and Wikipedia) tells us - refused to name personal and political associations on the grounds this would violate his First Amendment rights.

"I am not going to answer any questions as to my association, my philosophical or religious beliefs or my political beliefs, or how I voted in any election, or any of these private affairs.

"I think these are very improper questions for any American to be asked, especially under such compulsion as this," he told the committee.

In 1966, Seeger helped establish the Hudson River Sloop Clearwater, a non-profit environmental organisation. It's still going strong and, the other night, on the occasion of a significant birthday, he agreed to perform a charity concert on its behalf.

With him on the stage were Joan Baez, Billy Bragg, Rufus Wainwright, Arlo Guthrie, Bruce Springsteen and others. Pete Seeger is the granddaddy of them all. On Sunday he turned 90 and sang for an adoring crowd, who cheered wildly at a letter from President Barack Obama saluting the birthday boy. It seems he can still move mountains, and presidents, with a song.

And once, a long time ago, I had the privilege of sitting at his feet and watching a rare combination of humility, musicality and greatness at work.