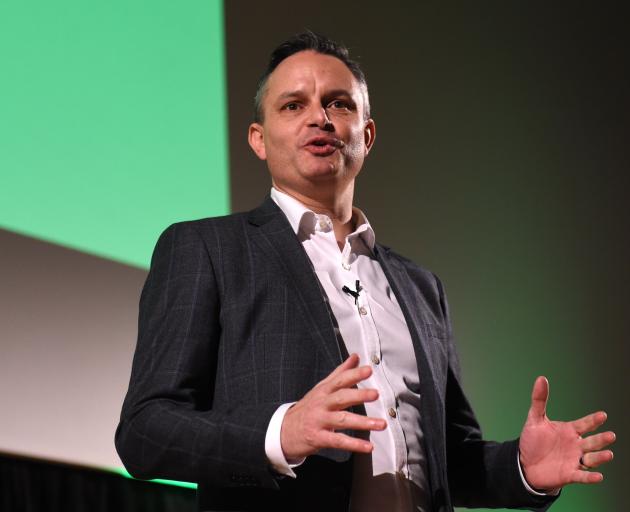 Green Party co-leader James Shaw. Photo: Gregor Richardson
One only hopes the Green Party appreciated the irony of their discussing a global warming emergency while snow was falling to sea level near where the party held its annual meeting at the weekend.

Not that the party management would appreciate the irony; this was an AGM where the Greens wanted to look very serious, very busy and very business-like.

Hence, just the two co-leaders' set piece speeches and a rather nebulous "world cafe" were open to media during the weekend gathering, as the Greens continued their quest to eliminate archival footage of party members Morris-dancing from the national memory.

All this careful stage management achieved was to see just three reporters travel to cover the AGM, with budget-minded media companies obviously feeling the expense of getting to Dunedin was not worth it for an hour's worth of speeches.

Some Greens may believe that a party with eight MPs and a role in Government did not get the coverage it deserved, but media organisations may well retort that that was exactly what it got.

James Shaw valiantly argued in his Saturday speech the Greens do have a story to tell.

As he ticked off a shopping list of Green accomplishments, to varying degrees of audience enthusiasm, Mr Shaw was trying to achieve a few things.

Firstly, he was trying to convince the party faithful the Greens were really achieving something ... easier said than done after a former Green candidate's social media spray earlier that day that the party was now too centrist.

Secondly, Mr Shaw was trying to convince a wider audience that the popular perception that New Zealand First has achieved more through supporting Labour to govern than the Greens have is flawed.

Thirdly, Mr Shaw may even have been trying to convince himself of both those things, in a speech which was all about pragmatism rather than stirring passions.

His ultimate point was salient though; the party has achieved more in 18 months in Government than it ever has in opposition.

That was echoed by Marama Davidson yesterday with an address on housing that went down well with party faithful.

The activist streak in the Greens was looking for fighting talk and while a non-announcement that the party will negotiate its rent-to-own policy as part of the Government's KiwiBuild reset is hardly a call to storm the barricades, on a chilly day it was warmly greeted.

That suggests that while there is certainly simmering discontent in some quarters of the party, there is enough party unity for a red hot crack at the 2020 election.