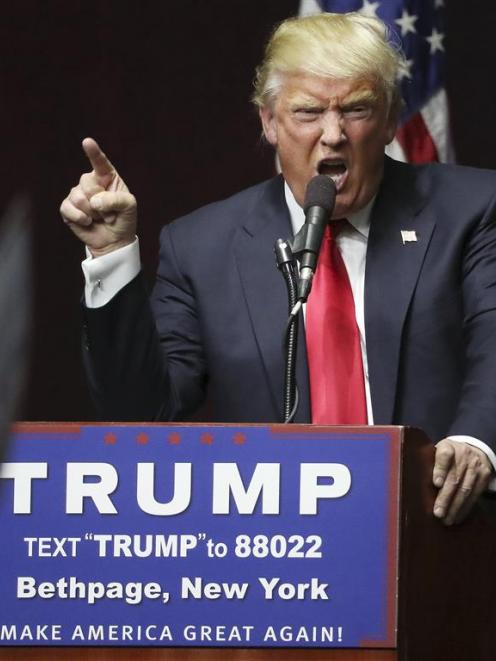 US Republican presidential candidate Donald Trump. Photo by Reuters.
"These are my principles, and if you don't like them ... Well, I have others.'' (Groucho Marx)

The odds have lengthened against a Donald Trump presidency after his Wisconsin defeat, and they were probably already 10-to-one against.

If he wins the Republican nomination, which is still very likely, he will almost certainly face Hillary Clinton in the November election, and lose badly.

Or at least that is the orthodox calculation, for Mr Trump is far behind Mrs Clinton with key voter groups such as women, Latinos, African-Americans and young people who bother to vote.

But she is an uninspiring campaigner, she is the ultimate Washington insider in a season where insiders are out, and there are a few skeletons that might come rattling out of her closet during the campaign.

A big terrorist attack could also change the odds.

So President Donald Trump is still a small but real possibility.

You wouldn't be a fool to put a dollar down if somebody offered you 12-to-one odds.

That frightens a lot of people quite badly, especially when it comes to foreign policy, for he is the loosest of loose cannons - or so it seems.

There he goes, starting a trade war with China, pushing Japan and South Korea to get their own nuclear weapons, trashing Nato, building a wall to keep Mexicans out, and closing the US border to all Muslims.

He's even in favour of torturing suspected terrorists.

But would he really be as rash and ignorant in the White House as he is while in campaign mode?

All of his present positions are calculated to appeal to the group whose support he must win to get the Republican nomination: "angry white men'' who feel that they have been cheated of their right to a good job and a central role in American politics by unseen economic and demographic forces and clever, wicked foreigners.

The internal politics of the Republican Party are now largely dominated by their concerns.

Mr Trump is so focused on getting their support that he even opposes the traditional Republican policies that have contributed to their marginalisation and impoverishment: free trade, low taxes for the rich, deep cuts in welfare programmes.

And he gets away with it, although no other Republican candidate would.

Once Mr Trump wins the nomination, however, he must appeal to a broader audience to win the election, and he is a past master at changing his tune.

Five years ago his publicly declared principles would have qualified him to run for the Democratic presidential nomination - but, like Groucho Marx, he can come up with other principles in a flash when it serves his interests.

Take abortion rights: five years ago he defended women's right to choose; last week he wanted to jail women if they chose abortion - and in the face of a public outcry, he rapidly retreated and said he just wanted to punish the doctors who did the abortions.

Whatever the audience wants, it gets.

Once the Republican nomination is in the bag and Mr Trump must address a broader audience to win the election, he will have to shift his ground, and he will do it.

(The angry white men will just have to tag along, because they have nowhere else to go.)

Then, if he should win the election, he might change his policies again. Who is the real Donald Trump?

The answer is that there is no real Donald Trump, in terms of policies and principles.

He will do anything and say anything to get what he wants - but beyond being elected president, it isn't clear that he wants anything in particular.

If ideologues frighten you, then you needn't worry about the Donald.

What does legitimately frighten people about Donald Trump is his ignorance (which is not just a show to appeal to his current audience) and his impulsiveness.

On the other hand, he is actually quite intelligent, and as president he would have to rely on military officers and civil servants who really do not want to uproot and overturn everything.

Moreover, they can generally block or sabotage truly stupid decisions, if that becomes necessary.

The result might be a presidency with a foreign policy like Richard Nixon's: paranoid, unscrupulous, but not ideological at all and not given to needless provocations on the international scene.

The trickiest bit would be Mr Trump's first few months in office, because he has definitely frightened the horses internationally and they are getting ready to bolt.

It is hard to overstate just how frightened other governments are about Mr Trump in the White House.

The word "fascist'' gets used a lot in private even by national leaders, and of course it is used publicly every day by the mass media in most other countries.

Perhaps the biggest danger is that America's allies and enemies would react preemptively to his rhetoric without waiting to see what he actually does in office.

So, on mature reflection, it really would be a very bad idea for Mr Trump to become the president of the United States.