How to finish the harbour cycleway 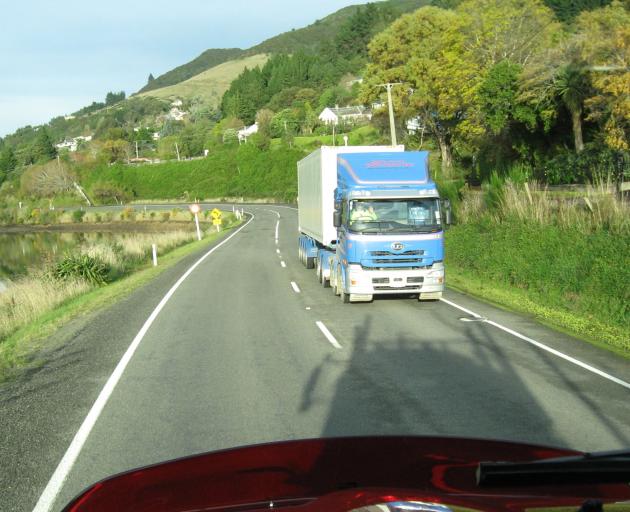 Imagine, if you will, that large numbers of cyclists have started using State Highway 88. It doesn't matter why - perhaps the phys-ed school has opened a new facility in the old Garrison Hall in Port Chalmers - but all day, every day, there are hundreds of cyclists.

Riding perfectly legally, two abreast except when passing a parked car, fully visible in hi-vis Lycra, but singles and groups of 10 or 20 at a time.

So many that it's impossible to pass them all. So many that all traffic is slowed to the 15kmh or 20kmh of a cyclist. Imagine the howls of protest from the port company, from the trucking companies - ''the road's been hijacked'', ''industry is threatened'', ''this is costing the economy billions in lost time''.

Well, it has happened! Not quite like that - that was looking-glass land - the road has been hijacked, but it is by the trucking companies and the port company.

You will understand what I mean if, like me, you have seen a container truck coming towards your car with half its 24 wheels on your side of the white line.

If, like me, you've seen logs scattered like spilt matchsticks at St Leonards - and again at Blanket Bay. If you've seen a car run off the road when a logging truck whose driver misjudged his overtaking manoeuvre ran out of space.

Or if, as a cyclist, you've worked out, as a friend of mine did, that the thump on your cycle helmet was the wing mirror of the truck that was passing you.

If you could have been able to reach out and touch the wheels of a passing truck while there's nowhere to escape because the ''safety'' barrier is just as close on the other side (and more ''safety'' barriers are due to be built, to the greater hazard of all pedestrians, cyclists and motorcyclists) or had to brake furiously as the trailer of a truck puts its wheels in the gutter in front of you as the driver cuts the corner.

Perhaps it's liveable with - just - as a motorist. As long as whenever you drive SH88 you turn off your imagination and shut your eyes tightly so you can't see how bad it is.

But it doesn't need to be like this. For cyclists and pedestrians there is a solution in the form of an excellent plan by NZTA to complete the off-road track which at present stops at St Leonards.

An excellent plan - except that its cost came in at more than twice the budget.

I believe it is time the port company and the trucking companies stepped up to the plate and made up the shortfall. They have stolen our road, their net benefit to the community that hosts them falls with every new mechanisation (remember the days of wharfies and stevedores and dry docks and repair facilities and engineering companies to service the ships - yes, and bars and brothels and cafes to service their crews! All returning money to the Port community - and all gone now).

It's time for these companies, whose living depends on their use of a road that belongs to all of us, to front up with the necessary money to complete the track now and without demur. They owe it to the whole community of which they are a part!

-Tony Williams is a Dunedin goldsmith, commuter cyclist and founding member of the Harbour Cycleway Network.

I am not a resident of the West Harbour area but regularly drive around this very scary section of road. Tony Williams has shown a very good perspective on the issue and his suggestion of who should be paying for the remainder of the cycleway makes good sense. Port Otago could surely front up with some sponsorship and could even have naming rights, eg "The Port Otago Cycleway". This has worked at The Edgar Centre and at Forsyth Barr Stadium for example. Come on Port Otago - let's get these bikes into a safe area before something terrible is allowed to happen.