How to lay the groundwork for constructive arguments 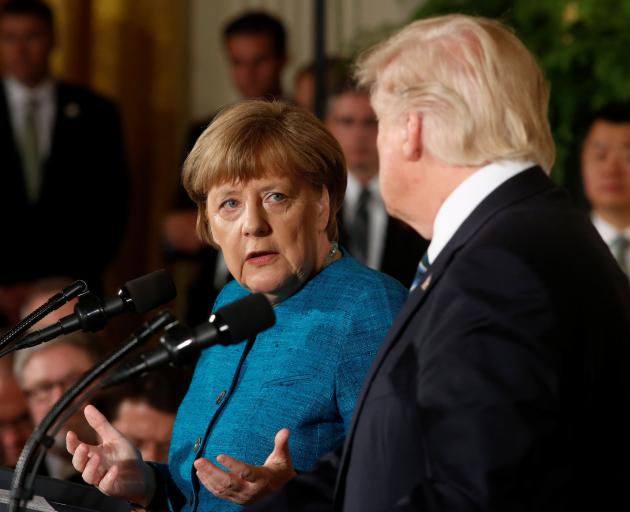 German Chancellor Angela Merkel makes her case to United States President Donald Trump during a joint news conference in the East Room of the White House in Washington last week. Photo from Reuters.
James Maclaurin explains how to have an argument with someone you just don’t get.

The recent and seemingly sudden polarisation of politics and public debate is deeply concerning.

Popular, newly mainstream politicians in many countries are openly questioning truth, academic expertise, open dialogue and democracy. How should universities, their staff and students respond?

On campuses in the United States and elsewhere, students have taken to trying to out-shout the opposition to whom they steadfastly refused to listen.

Tempting as it is, refusing public debate cannot be the right answer. Be it immigration, jobs, climate change, abortion, taxes - all manner of political, cultural and scientific ideas - we have to be able to talk about what divides us, and those discussions must include experts and public figures whose passionately held beliefs are diametrically opposed to our own.

Here are my handy tips for having successful arguments with someone you just don't get and who doesn't get you.

Even if you are passionate about what you are arguing for, nothing will be served if the other person thinks you are trying to intimidate them.

Even if you are not sure whether the other person is being honest and serious, take them seriously. Reason the way you think we should, when arguing about important issues. (Hint: when you argue with someone, you should be trying to learn from them, not prove that they or their friends or their compatriots are less smart than you).

Work out what you disagree about

Is it the facts or is it the values you hold? State your reasoning. Ask for theirs. Tell them why you think your argument is convincing. Ask them why they think theirs is. Keep going until you both understand how each other's arguments work and what assumptions they rest on.

If you disagree on the facts, visit factcheck.org

I recommend their article on ''How to Spot Fake News''. Talk about evidence. Tell them what sort of evidence would make you change your mind. Ask them what would change theirs. If you can't agree on the facts and it really matters to both of you, consider taking a course. Physics, history, chemistry, criminology, genetics. You've come to the right place.

If you disagree about values, work out what values are doing the work

Fundamental disagreements about values are common and they can be managed. Politics, philosophy, sociology, anthropology, history and many other departments are full of expertise about making diversity a fuel for success, not a recipe for disaster.

See the other person's point of view

If you find this hard, try writing down your arguments and then reading out each other's. Tell them what you think they think. Ask them what they think you think.

Human beings have built-in cognitive biases. Among other things, we are much more likely to be persuaded by arguments and evidence that support the beliefs we currently hold.

Check out the Wall Street Journal's red and blue feed experiment to see just how polarised social media is making public debate. So ask yourself ''how might people disagree with me?''. Try out your argument on people you don't know so well or you think of as holding different opinions to yours.

Acknowledging the differences between you, how do you think we should best live together? What concessions should we make to one another?

-Associate Prof James Maclaurin is from the University of Otago's philosophy department. He said this article distils some of the most important skills taught in the department's critical thinking course.

You would need to have a considerable stake in the outcome to go to all this trouble with the disputatious.